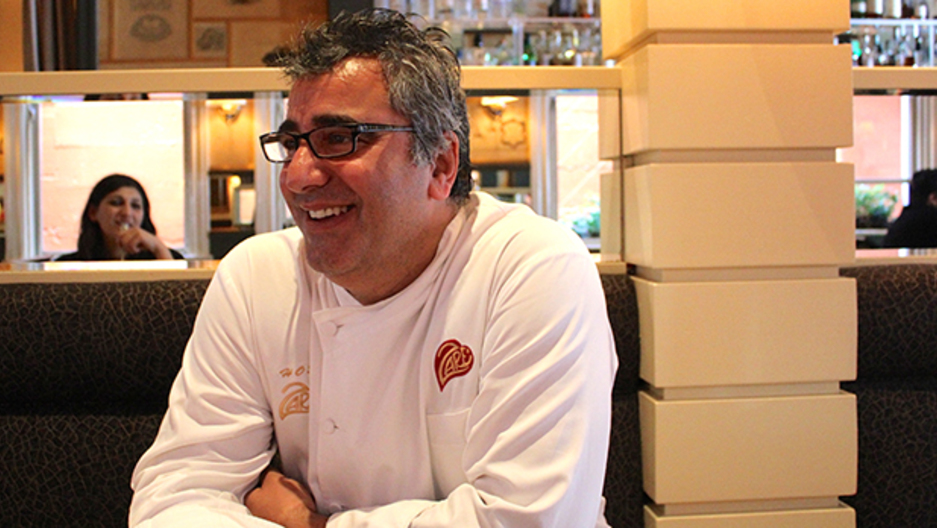 Hossain Zaré Khiabani, a chef and restaurant owner in San Francisco, talks about his first days in the US after arriving from Iran. (Photo: Monica Campbell)

We recently reported on a project let by Philadelphia's South Asian American Digital Archive, which is collecting stories about immigrants’ first days in the United States.

We’re also collecting First Days memories from immigrants from any part of the world. Share your story by clicking the recording button below. Just start speaking right into your laptop or desktop computer microphone.

And here is a submission from Hossain Zaré Khiabani. He is from Iran and moved to San Francisco in 1986. Today, he is the chef and owner of one of the city’s more popular restaurants, Zaré at Flytrap.

"Full name: Hossain Zaré Khiabani. I was born in Tabriz, Iran, born 1962. And we’re at the Zaré at Flytrap, it’s been here as a restaurant, Flytrap, since ’88. I took over on 2008. Kind of a Cinderella story for any immigrant. I’m here working the place the first time and then, 20 years later, buys it and owns it.

You could see the people when you say Hossain, right? It was ’86, a few years after the hostage crisis. And it wasn’t pretty to be Iranian here. But, you know, their loss. They lost a good friend. The first day when I came, I met some friends in the first few weeks, some Iranians. Of course, they find you; you are fresh from country and they want to be friends, to get you in their groups. And I’m like, “No, I’m not here to be part of the group." Number one, I want to learn language. And I cut myself away from the group. It was tough for me but it was good for me. I did that because I wanted to hang out with Americans, the culture, to learn language.

For me, my strength was that for two years I was in the military in Iran. That helped me a lot. It made my skin thicker because, say, worst-case scenario, I can sleep on the street. I know how to protect myself. Like I had days in college when I would survive on canned tuna and coffee. I couldn’t afford anything else. You want to find how you will survive.

Food? It was shocking, especially the meat – rare, medium-rare, bloody, because we eat braised meat. And also how much people go out to eat, eat outside. There is not time to cook. So the system gets you right away. You want a donut. But it’s not like that in Iran. Everybody likes to home cook. You eat all the time at home, breakfast, lunch, dinner.”

The World, inspired by the South Asia Asian American Digital Archive’s First Days Project, is looking for your stories about your first days in the United States—or those of your parents or grandparents. Share by commenting here, using the hashtag #firstdays on Twitter or Facebook, or by pressing the record button below and speaking into your computer's microphone.