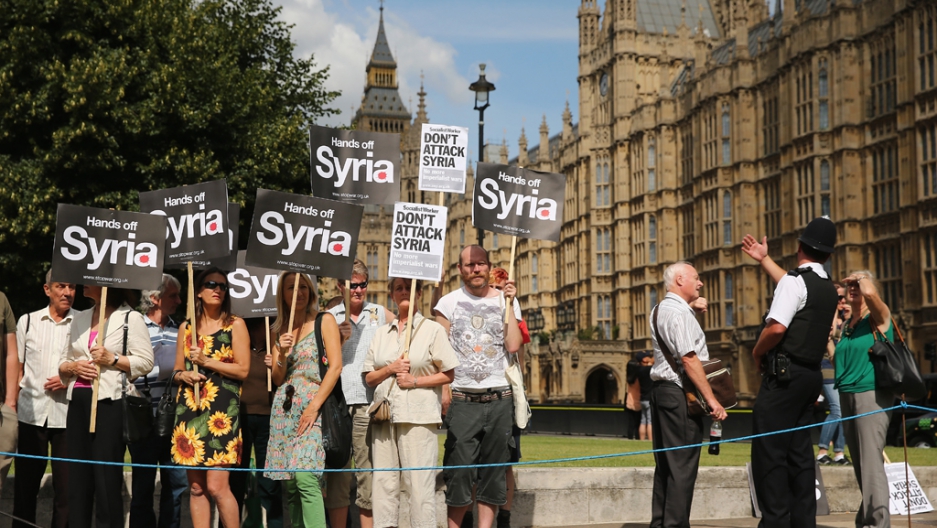 Anti-war protesters gather on College Green outside the Houses of Parliament on Aug. 29, in London, England. Lawmakers there voted against plans for a UK military response to chemical weapons attack in Syria.
Credit: Dan Kitwood
Share

MONTREAL, Quebec — As US President Barack Obama pushes to muster foreign support before dropping bombs on war-ravaged Syria, options for a broad international coalition are shrinking.

France is the only remaining ally, as of Friday morning, on board for a strike.

Yet prominent Canadian diplomats who helped make the “Responsibility to Protect” (R2P) a United Nations doctrine say getting more countries on board could give a US military operation in Syria a greater sense of legitimacy.

A US military strike on Syria remains unpopular among the American public, and US Congress and even some outspoken hawks still need convincing. With British parliament’s decision late Thursday to reject military action, building a coalition abroad looks all but hopeless. Even so, the UN’s R2P, its earliest promoters say, is the best way forward.

Endorsed by all UN member states in 2005, R2P holds that military action from the international community is justified as a last resort to protect civilian populations.

Paul Heinbecker, who promoted the doctrine while he was Canada’s UN ambassador in the early 2000s, says a coalition acting on the basis of R2P could “at least put some minds at rest,” even without the UN Security Council’s unlikely approval.

“They apparently don't want to take the time to form a coalition, which I think is an error,” Heinbecker, now a fellow at the Waterloo, Ontario-based think tank, the Centre for International Governance Innovation, tells GlobalPost about America’s push for Western intervention.

Heinbecker says the US would be wise to at least wait until the UN reports its findings on whether chemical weapons were used.

UN Secretary General Ban Ki-moon said the inspectors will finish work Friday and leave Syria and report their findings to him Saturday.

Past mistakes, particularly in the lead-up to the Iraq war, haunt the White House as it seeks strong backing and rationale for action.

“The cloud that hangs over all this is the Americans basically lying about the weapons of mass deconstruction in Iraq,” Heinbecker says, meaning that the bar is now “set higher than usual.”

R2P should be acted upon, according to the UN doctrine, only if the following provisions are met: the force used is proportionate to the threat and likely to succeed, and unlikely to cause more harm than good.

Given the uncertain makeup of Syria's opposition, Heinbecker acknowledges those requirements will be difficult to meet, given that there are divided factions and “it's not quite clear how to achieve a situation where the killing stops and the political process takes over.”

Some argue such problems, including an influx of extremist foreign fighters, could have been avoided had R2P been used as basis for introducing a no-fly zone much earlier.

“We missed the boat and now it's gotten so out of hand,” says Kyle Matthews, the senior deputy director of the Will to Intervene Project at Concordia University's Montreal Institute for Genocide and Human Rights Studies.

“This is a problem that's been happening for the last 60 years. We do nothing or wait until it becomes so bad that we have to send in the military and start bombing like crazy, which doesn't solve the political problems that are behind the violence in the first place.”

After the Rwandan genocide, the international community began to explore how to react effectively when citizens’ human rights are grossly and systematically violated.

The UN put the task into the hands of a Canadian-led commission, which came up with the idea of the Responsibility to Protect.

R2P has been invoked a handful of times in the years since.

It was the basis for the UN-backed NATO intervention in Libya, which Heinbecker calls an “excellent” example for how the doctrine should be used.

In that case, Russia and China — which have Security Council veto power — were convinced to abstain from the UN vote to introduce a no-fly zone.

In recent years, Canada has largely abandoned the idea of R2P in official discourse, even as a multitude of think tanks and non-governmental organizations, some bearing the doctrine’s name, have sprouted up to promote it.

Matthews suggests Canada's Conservative government may have distanced itself for ideological or partisan reasons, since a Liberal government developed it.

Heinbecker was the last Canadian ambassador to sit on the UN Security Council, before the country lost its bid to get back at the table in 2010.

While some have criticized R2P as a way to legitimize foreign powers’ meddling, Canadians who helped make it UN doctrine insist R2P still has a role to play.

Lloyd Axworthy, Canada's former foreign affairs minister, argued in a recent opinion piece it could be used as the basis for action in Syria, even if Russia couldn't be persuaded to get on board.

“The very purpose of R2P is that we should all protect innocent lives without reference to purely national interests or crass political gamesmanship,” Axworthy wrote this week in the Toronto Globe and Mail.

Heinbecker, echoing Axworthy, says that while a US intervention in Syria would be a “tricky business, and a costly one,” it should be done.

“It would not be legal for them to act under the Security Council authority, but it would be legitimate in many people eyes,” he says.