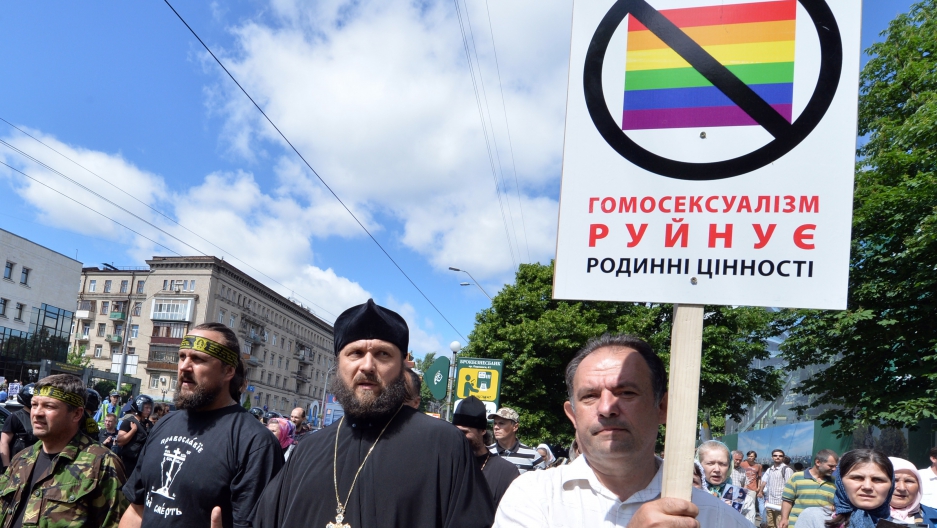 KYIV, Ukraine — Taras Karasiichuk was near his home in Kyiv in May last year when he noticed a group of young men following him. They began taunting him with insults, then attacked with their fists.

“They were shouting, ‘Faggot, you faggot!’ and just punching me and kicking me all over,” he says. “I have no idea how many of them there were.”

Karasiichuk is president of Gay Alliance Ukraine. The brutal beating, which shattered his jaw in two places, took place several days after officials had cancelled what was to be the city’s first-ever gay pride parade.

It was an ominous sign, prompted by a rising wave of homophobia that’s spilled over from neighboring Russia, where a new law recently banned gay “propaganda.”

The attacks increased. In February, a group of men assaulted Karasiichuk steps from his office in the city center.

He escaped by scrambling into a nearby restaurant. His attackers remained outside, hurling expletives and stones, one of which shattered the restaurant’s front window, before they ran off.

But his most alarming encounter took place at a Kyiv nightclub, where a group of anti-gay activists in tracksuits slammed him against a wall before warning him to stop spreading “homopropaganda.”

They knew where he lived, worked and spent his time, he said. They also plastered photographs of him across anti-gay websites.

A longtime advocate for lesbian, gay, bisexual and transgender rights in Eastern Europe, Karasiichuk felt seriously threatened for the first time by what appeared to be part of a well-organized anti-gay campaign.

Other victims have suffered worse. After a young gay man named Armen Ovcharuk was attacked outside a Kyiv nightclub in October 2012, he died in the hospital days later from complications from a blow to his head.

“For days I thought, ‘That’s enough. I’ll buy the first ticket to Stockholm and apply for refugee status,’” Karasiichuk says of the most recent attack against him. Instead he left Kyiv for the relative calm of Lviv, a city in western Ukraine.

In the past few months, numerous young men, some gay, others not, have been attacked simply for “appearing gay,” says Stas Mischenko, Gay Alliance Ukraine vice president.

Although Ukraine was the first post-Soviet country to decriminalize homosexuality following independence from the Soviet Union in 1991, experts say the mounting attacks are partly explained by the continuing widespread intolerance of sexual minorities, who are often subjected to stereotyping and stigmatizing.

“We see these attitudes from the general public on up to police, prosecutors and government officials,” says Heather McGill of Amnesty International.

A 2012 Gorshenin Institute study showed 72 percent of those polled had negative attitudes toward sexual minorities.

Some 65 percent of Kyiv residents surveyed by the Socis Sociological Center in 2010 said homosexuality is a perversion or mental disease.

In a 2012 analysis, Nash Mir (Our World) Gay and Lesbian Center coordinator Andriy Maymulakhin warned of “increased polarization of negative attitudes towards the LGBT community.”

The mounting anti-gay fervor has generated support for homophobic groups such as Occupy Pedofilyay (Occupy Pedophilia), which began in Russia before expanding into Ukraine.

Amnesty International and other rights organizations say such groups are influencing public opinion, aided by a culture of impunity and the dissemination of false information about homosexuality.

The group films its encounters with gays on mobile phones and posts them on YouTube.

Occupy Pedofilyay has won a massive following on social media, particularly on VK.com, the Russian equivalent of Facebook. The movement’s Kyiv pages show links to dozens of regional factions.

The group uses social networks to organize and communicate and disseminate its videos of the confrontations, referred to as “safaris.”

It attracts new members by allowing them to take part. Occupy Pedofilyay Kyiv’s VK.com page says it costs $15 dollars to participate in a safari.

After initially agreeing to answer questions from GlobalPost by email, Occupy Pedophilia Kyiv leader Dmitry Mikolenko later declined. “I have read the questions and I don't like them,” he wrote.

However, Andrey Lapshuk, head of media relations for Occupy Pedofilyay Kyiv, said his faction prefers psychological tactics to physical violence. “They deserve [being attacked], I think,” he said of gay men.

This week, reports said the group staged a handful of violent assaults against young, gay men in the central Ukrainian region of Zhytomyr. No arrests have been made.

More from GlobalPost: Russia defends anti-gay law in letter to the IOC

The authorities have remained silent on the subject, to the dismay of rights activists who say police have targeted gays in some cases.

In the eastern Kalinin region near the city of Donetsk, three officers allegedly posing as gay men on dating websites recently lured closeted gays into meetings during which they blackmailed them for money, threatening to beat them and to out them to their families. The men ended up paying to the tune of $9,000, the local online news site Novosti Donbass reported.

Officials filed extortion charges against the officers, but never brought the case to trial.

The anti-gay tide appears set to grow. For now, says Olena Semenova of the NGO New Wave for the Better Future in the southern city of Kherson, “the daily lives of LGBT people in Ukraine will be governed by ‘don’t ask, don’t tell.’”