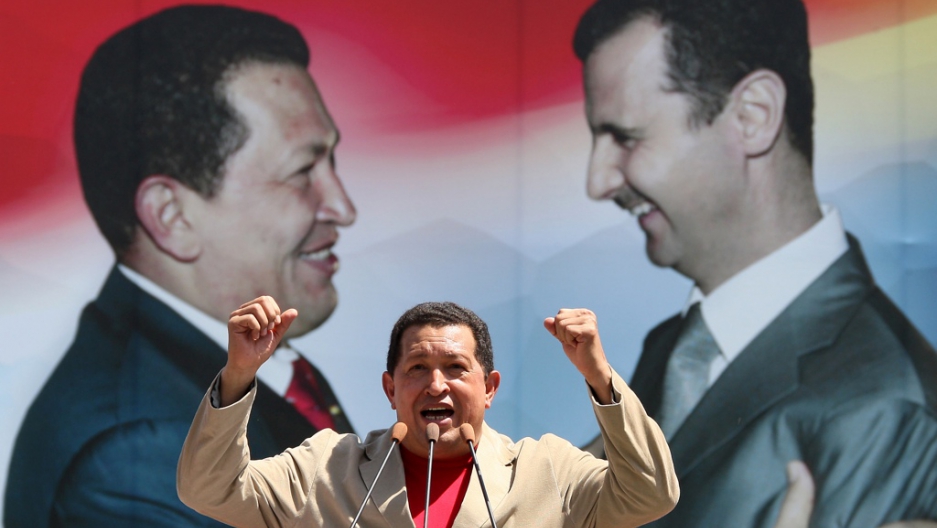 CARACAS, Venezuela — A Venezuelan congressman has requested indefinite leave from office to fight alongside the Syrian army, as Western powers debate a military attack on the nation ravaged for more than two years by civil war.

Abdel el-Zabayar, a member of the ruling socialist party who is of Syrian descent, has requested authorization from Venezuela’s National Assembly to fight against the rebels, according to Venezuelan media reports Thursday. The permission appears to have been granted.

“Syria needs full support against these criminals,” Zabayer wrote in his request, according to a fellow lawmaker speaking to state television.

Venezuelan authorities have undermined Western sanctions to supply fuel to Assad’s government during the civil war, which the United Nations says has claimed at least 100,000 lives.

"The decision of the [Venezuelan] government is to give all our support to Syria," Zabayar said last year, when Reuters revealed Venzuela's shipments of diesel fuel.

GlobalPost attempted to make contact with the congressman, who was unreachable Thursday morning.

Taking after his predecessor Hugo Chavez, President Nicolas Maduro has been vociferous in his support for the government of his Syrian counterpart, Bashar al-Assad.

President Maduro on Wednesday reaffirmed his support for the Assad regime, in line with a number of controversial relationships Caracas forged under the late Chavez — including with former Iranian President Mahmoud Ahmadinejad and Libya’s slain leader Muammar Gaddafi — and other signals defying a disapproving Washington.

Earlier this week, Maduro said his government had thwarted a planned assassination attempt against him, which he claimed involved the United States and its ally Colombia.

“You know what the Western plan is?” Maduro said. “It’s the same as in 2002, when they launched a coup against Chavez and invaded Iraq. The plan is to eliminate me as they attack Syria.”

“We’re not going to abandon the Syrian people,” he said earlier this week in Caracas, adding that Western powers must await the results of a UN investigation into an apparent chemical attack near Damascus before taking action.

The rhetoric closely echoes that of Chavez, who died in March. Before his death, he said of the West's Syria strategy: “It's the same formula [Western powers] used against Libya: inject violence, terrorism from abroad and then invoke the UN.”

“If Syria has problems, Syrians should be the ones to solve them,” Chavez added a few months later, calling the Syrian rebels “terrorists” and lambasting Western powers for supporting them.

Venezuela is home to a large community of Syrians, who even have their own popular social club in Caracas. Some have risen to prominence, including state Governor Tareck El Aissami — born in Lebanon to a Syrian family — who was Chavez's interior minister for four years.

Chavez visited Assad in Damascus in 2009, on a tour that included stops in Libya, Algeria, Iran, Belarus and Russia. A year later, Syria's president repaid Venezuela the visit.

Chavez long pricked the ears of Western diplomats with his affinity for pariah states such as Iran, one of Syria’s few allies. He welcomed Iran’s Ahmadinejad to Caracas in June last year, joking that the pair were going to the “basement now to set our sights on Washington and launch cannons and missiles.”

Some Latin American leaders share Venezuela’s views on Syria. In a letter published in Cuba’s communist newspaper Granma on Wednesday, Fidel Castro wrote: “The Empire's Navy and Air Force and their allies are preparing to begin a genocide against the Arab people.”

Overall, however, Latin America is not unified behind the region’s biggest oil exporter in favor of Assad and against the fight to topple him.

Yet many in the region are uneager for an international military response to the Syrian forces’ alleged chemical weapons attack on its own people.