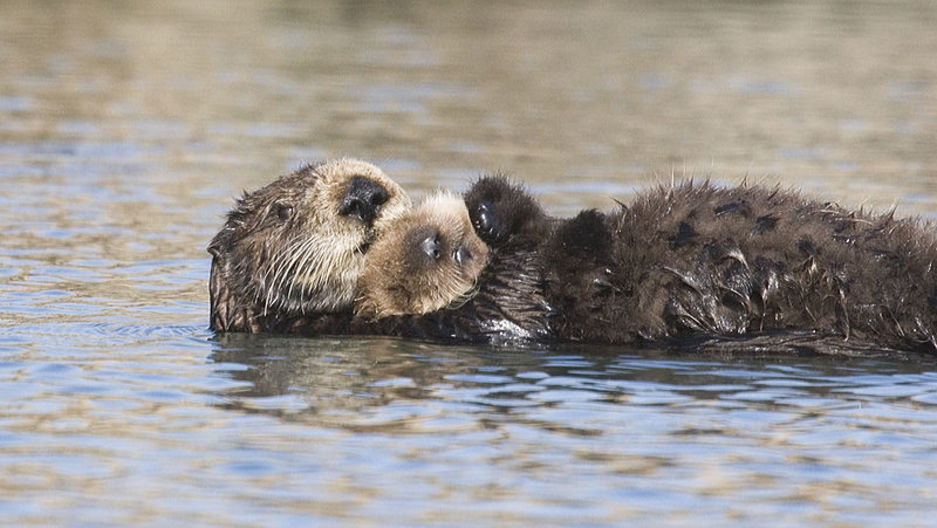 A mother sea otter floats with her pup on her chest. Sea otters, researchers believe, play a key role in allowing kelp forests to thrive. (Photo by Mike Baird via Wikimedia Commons.)

Sea otters are cuddly, cute and playful, but research from the University of California at Santa Cruz claims they could also hold one of the keys to mitigating climate disruption.

Two scientists from UCSC have demonstrated the crucial role that sea otters play in the health of one of the ocean’s great carbon sinks, kelp forests. If we want to sequester more carbon from the atmosphere, they say, we need more otters.

University of California at Santa Cruz is Chris Wilmers says over time, research has revealed that large predators can play a major role on the health of plant systems, because of their impact on plant-eating animals.

"When otters eat sea urchins, which are their main diet for instance, we see kelp forest bounce back to life," Wilmers said. "My research has also focused a bit on climate change and so I thought I wondered if there was a connection between the two."

Over the past 40 years Wilmers and co-researcher Jim Estez have been looking at the effect of sea otters on coastal ecosystems. Their research has shown that an abundance of sea otters leads to healthier sea kelp forests.

"What’s novel about this study is that we looked at how that influences carbon," Wilmers explained. "And what we found is that there’s a dramatic draw-down of carbon from the atmosphere when you have sea otters."

Their research has focused primarily on the Aleutian islands south around the coast of North America to the U.S.-Canada border — an area once home to hundreds of thousands of sea otters. Hunting, trapping and environmental changes have driven that population down dramatically.

One leading environmental factor is a shift in killer whale diets, from feeding mostly on baleen whales to feeding on sea otters — a change attributed to an increase in whaling after World War II that depleted baleen whale stocks. Killer whales shifted their diets to different kinds of seals until those were depleted and eventually to sea otters, driving the population to just a few thousand.

"There’s been a sort of chain of cascading events that initiated back in the 1950s with heavy whaling," Wilmers said.

But the surviving otter population has an outsized impact on removing carbon from the environment. According to the scientists' research, the sea kelp sequesters between $250 and $400 million worth of carbon — sequestration made possible by sea otters.

And that gives Wilmers hope for preserving and expanding sea otter populations.

"The hope would be that you could use that money to reintroduce sea otters and restore the kelp forests," Wilmers said.

But for that to happen, the nascent carbon markets will need a great deal of additional development — and that could be a few years off.