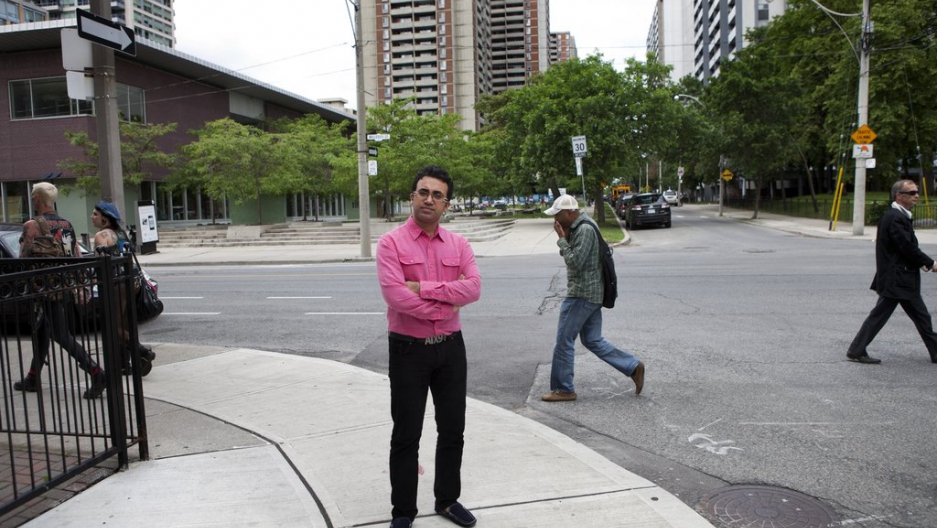 Iran is one of several countries that allows the execution of individuals for homosexual conduct. As a result, some LGBT citizens choose to leave with help from an “underground railroad” spanning from Iran to Turkey and then across the globe, from Canada and the United States to Europe and Australia. Turkey, the first stop for many on this underground railroad, is a strange limbo for refugees. Refugees don’t know how long it will be until they’re assigned a new country by the United Nations High Commissioner for Refugees (UNHCR), and they don’t know where they’ll go next. After an initial interview that grants them refugee status, they wait for a second interview. After the second they wait for a third. Finally, if all goes well, they’re assigned a new country and a date of departure. The average waiting time is 18 months.

TORONTO — Mohammad and Danial are at their new apartment in Toronto on one of the first warm days of spring. Sandals have replaced boots, and trees are redolent with blossoms. Shafts of light fall through gauzy curtains and day turns to dusk as they sit drinking tea.

This afternoon is the one-month anniversary of Mohammad and Danial’s move to Canada from Iran as LGBT refugees.

The living room has the new-home smell of a place that hasn’t yet taken on the scents of its inhabitants. Wheat grass sprouts in a small planter on the kitchen table. The sabzeh, bright and tender, is a sign of the coming Persian New Year, a symbol of rebirth.

Norooz, literally “new day,” is the most important holiday in Iran, signaling the beginning of spring. The year begins at the vernal equinox, the day when the Earth is tilted neither away nor towards the sun. The first 12 days of the holiday are marked by visits to family and friends. The 13th day, the end of the celebration, is usually spent picnicking.

The moment when the sun will cross directly over the Earth’s equator is still several days away. They both have yet to find jobs and are struggling to wrap their ears and tongues around a new language. They’ve left everything behind — families, friends, and livelihoods — in what may be one of the biggest trade-offs of their lives.

“Living in Iran was full of stress and worry,” Mohammad says. “I tried to solve the issues in order to stay because leaving all of your belongings and going into exile is not an easy thing to do. But at some point you can’t tolerate it anymore, and at that time I decided to leave.”

Back home, Mohammad, 29, lived a double life. At his job in a home-furnishings store, he feared his coworkers. At home, he worried his family would find out he was gay and turn him in to the police.

Danial, 26, has a similar story. After his second year of studying electronics at university, he was called into a meeting with the school’s security department because of rumors about his sexual orientation. Soon after, he received a letter of dismissal. A contact he had at the university told Danial he was lucky: “'They are aware of everything, maybe more than you think. They mentioned your best friend’s name as well,’” he quotes his contact saying.

On the heels of getting kicked out of school, Danial’s mom told him it was best if he moved out of their family home. Years earlier, his mom had asked him to leave but an aunt had interfered on Danial’s behalf, saying he was too young to be on his own. “I don’t feel like I belong in this society,” he says of Canada. “Everyone looks at me like I’m a stranger. But there’s one thing that makes it better: I have the right to live here.”

Danial and Mohammad both left home by way of Turkey, a country that many lesbian, gay, bisexual and transgender (LGBT) refugees first flee to after leaving Iran. They did so reluctantly and with great ambivalence.

“I love Iran,” Mohammad says. “If ever I find out that society and culture is at a stage when they can accept me as a human being and not interfere in my personal life, I wouldn’t stay away.” Once they reached Turkey, they were in limbo for a year and a half before they were granted asylum by the United Nations High Commissioner for Refugees and able to move to Canada.

“One of the good things I learned is to have patience. There were no other good things about that period,” Danial says, adding that he felt only marginally less precarious in Turkey than he did in Iran. “It is not a safe country. They pretend that it’s diverse and safe, but it’s not.”

Mohammad and Danial are two of the several hundred LGBT refugees who have left Iran in the last half dozen years with the help of the Iranian Railroad for Queer Refugees, an informal network of travel routes and safe houses that runs from Turkey to Toronto. Founded in 2006, the organization, originally under a different name, aims to provide protection and information to LGBT citizens of Iran and to help them leave, if they decide to.

Saghi Ghahraman, head of the Iranian Queer Organization, another Toronto-based organization that helps LGBT refugees, is also a refugee.

Ghahraman is at home in northern Toronto on a gray afternoon. Like Danial and Mohammad, she is preparing for the Persian New Year. Sprouts grow in shallow bowls on the bookshelf, next to a bright display of oranges. A poet and activist, Ghahraman left Iran in 1983 after sweeping arrests of Tudeh Party members and its women's organization branch. In 2006, she and Arsham Parsi joined forces to help LGBT refugees; in 2008 the two parted ways and Parsi began a separate group, pursuing the same work under a different name. Today, both groups help similar populations within Iran and the diaspora.

Even today it remains difficult for outside or alternative information to reach many people in Iran, Ghahraman says, especially outside of the country’s urban centers. An experience that demonstrated the persistent censorship within Iran occurred in 2007, when the government shut down Shargh, a leading reformist newspaper, after it published an interview with Ghahraman.

Though the interview focused primarily on poetry and literature, it also included comments by Ghahraman stressing the importance of sexual freedom — the need for people to be themselves.

“Being gay is something I am and I can’t escape,” Mohammad says. “I know some people who decided to try the alternative, to live as a heterosexual, but they weren’t successful. It doesn’t work.”

From activist to outcast