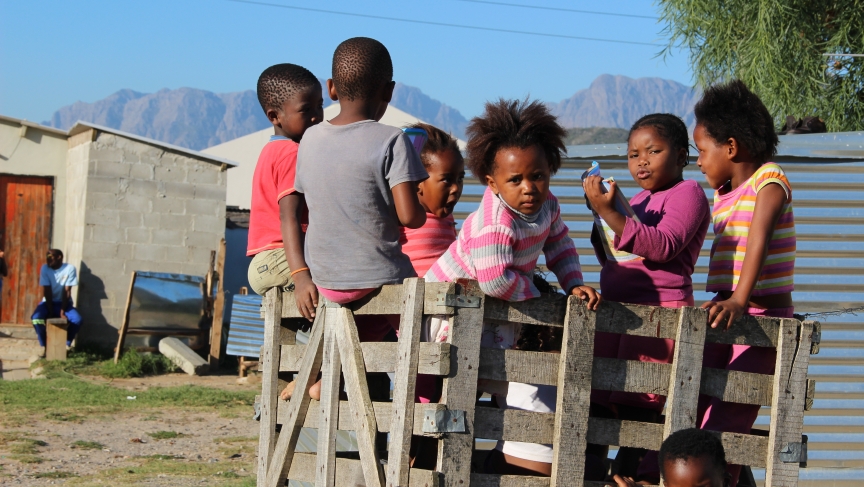 In a dusty township 30 miles outside of Cape Town, South Africa, kids seem to be everywhere.

Children play inside a large, wooden crate along the side of the road. Two boys chase each other nearby.

Just up the street, inside a small, cement home, things are much quieter. A 31-year-old woman chops onions in the kitchen, while her husband relaxes on the couch.

Thembi and Lloyd (not their real names) say that when they got married a few years ago, they immediately started trying to have kids.

“In (Xhosa) culture, when you are married, you must have children,” Thembi said.

But she and Lloyd didn’t have any luck. After more than two years of trying, they started to worry. They went to a doctor, who told Thembi she had blocked fallopian tubes and couldn’t conceive naturally.

The couple briefly considered adopting, but they didn’t think their families would approve.

“They definitely won’t be happy if you will come with an adopted child,” said Lloyd. “That means that the family name has now stopped in that line.”

That left Thembi and Lloyd facing the possibility of a childless future — something that can be especially hard in Africa.

“Infertility is associated with a lot of suffering,” said Dr. Silke Dyer, an obstetrician and a professor of reproductive medicine at the University of Cape Town.

African couples that don’t have children are often scorned, she explained. At community meetings, they may not be given the respect accorded adults with children.

“If you’re there and you want to raise your opinion, they will say, ‘Sit, sit down, you do not have children — you cannot talk,’” Dyer said.

Many infertile women in Africa are abused or abandoned by their husbands, Dyer adds, and they often end up destitute.

In the U.S. and Europe, couples that cannot conceive will often spend thousands of dollars on fertility treatment, such as in vitro fertilization. IVF is available in some parts of Africa, at private clinics — but the cost is far beyond the reach of most African couples.

Dyer and her colleagues run a public clinic at Groote Schuur Hospital in Cape Town that makes IVF affordable. One of very few clinics of its kind in Africa, it keeps costs down by using a relatively inexpensive combination of drugs. The South African government also provides subsidies. About 250 couples receive IVF treatment each year, and roughly a third end up pregnant.

Thembi and Lloyd — the couple that was unable to conceive — heard about the IVF clinic from their doctor. At first, they were skeptical.

“We heard it’s for white people, not for us,” Thembi said. But after visiting the clinic, they decided to give it a try.

The procedure cost a fraction of what it would elsewhere, but for Thembi and Lloyd it was still tough to afford. The first attempt cost the equivalent of $300 — about as much as they make in a month. It failed. They tried again. It failed, too. Their doctor then recommended a slightly different IVF procedure, which cost about $800. That really put a strain on them financially.

“Now we have to buy just rice and meat, because every (dollar) that we have, we have to save for this (procedure),” Thembi said.

And it wasn’t just the cost of the treatment that was making their lives difficult. Thembi and Lloyd were also keeping their actions a secret. Lloyd says he couldn't tell anyone in his family what they were doing.

“To them it would look like an insult and we are doing things the Western way,” he said.

The day before Thembi and Lloyd found out if the third IVF attempt had worked, their expectations were low.

After that conversation, weeks went by. Thembi and Lloyd didn’t return calls. Finally, they returned my calls and said to stop by.

At their house, Thembi was curled up on the couch with a blanket, watching TV. Lloyd sat beside her, a small heater by his feet.

What had happened at the clinic? Did the doctors say she was pregnant?

Lloyd chimed in: “I feel good.”

Thembi and Lloyd know they are incredibly fortunate. The vast majority of infertile couples in Africa do not have access to treatment, and those who do are often unsuccessful.

Dyer, the director of the IVF clinic in Cape Town, does not expect IVF facilities to start springing up around Africa. She says most doctors and governments are more focused on bringing birth rates down — not up — and on confronting more pressing health issues, like HIV and malaria.

But Dyer says when it comes to family planning in Africa, the goal shouldn’t just be to help couples have fewer children. Remember, she says, some couples need help having more.