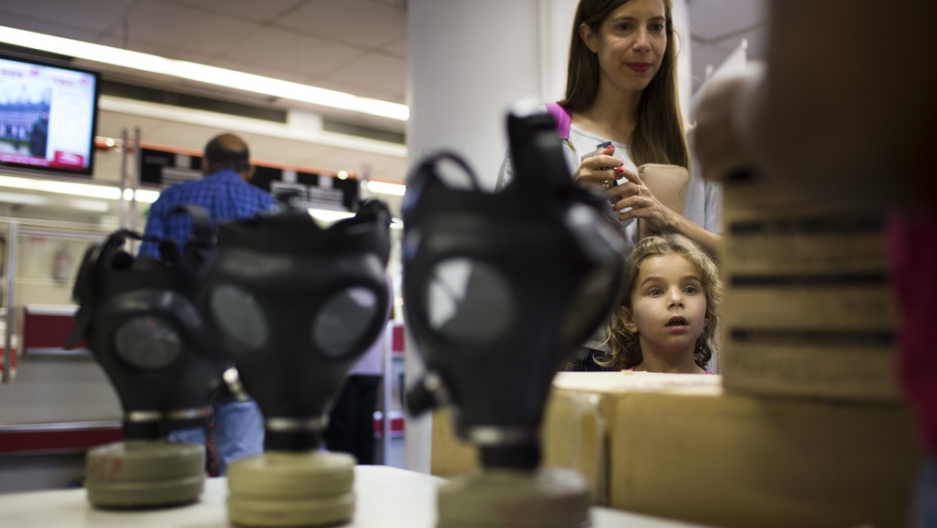 Israelis wait in line to pick their gas masks at a distribution center on Aug. 26, 2013 in Tel Aviv, Israel.
Credit: Uriel Sinai
Share

JERUSALEM — Imagine you are an average Israeli.

Average Israelis on their phones in Tel Aviv on Aug. 29, 2013. (Ilia Yefimovich/Getty Images)

Schools opened this week, and families are at the height of preparations for the Jewish New Year.

Meanwhile, US President Barack Obama seems poised to lead an attack against Syria, directly to your north.

The commander of Iran's Islamic Revolutionary Guard Corps warns that such a strike on Syria "will result in the imminent destruction of the Zionist regime of Israel.”

France, a US ally, and Russia, one of the remaining allies of Syrian President Bashar al-Assad, both dispatch warships to the Mediterranean.

What do you do?

If you are an average Israeli this week, you mob a gas mask distribution center.

In Beer Sheba on Wednesday, some people waited seven hours for the innocuous-looking small brown box with a black strap, which for many symbolizes protection from chemical or biological attack.

On Thursday morning, The New York Times described retired gentlemen sipping cappuccinos, stoic about the possibility of war, in Jerusalem's Hadar mall. That afternoon, not far away from the cafe, a throng lost patience and swarmed the counters issuing the masks, making off with the boxes in a pell-mell chaos — and causing the center's closure.

Israelis gather at the central post office in Tel-Aviv to pick up gas masks on Aug. 28, 2013 (Ilia Yefimovich/Getty Images)

A woman who had been waiting all day Thursday at a Haifa distribution center, jostled by an unruly crowd, sighed, "If we don't die in the war, we may just die in this line."

With what the daily newspaper Ha'aretz described as a "double-edged strategy," the Israeli army has been urging Israelis to stay calm but simultaneously to prepare for "the unlikely possibility" that Assad would seek reprisals against Israel.

The approach did not seem to calm the growing national hysteria.

Neither did the commentary of such august Israel observers as the Atlantic's Jeffrey Goldberg, who tweeted "I understand why Israelis have gas-mask anxiety, but a Syrian chem. weapons attack on Israel would mean the obliteration of Assad."

As the countdown turned into a national metronome with no accompanying music, Israelis were leaning more toward the skepticisms of Israel Army Radio's military analyst Tal Lev Ram, who said, "It's true that all assessments say there is very little chance of an attack. But everything is on the table. You have to prepare. I mean, who can rely on Assad's rationality?"

An Israeli mother juggles her baby and her gas masks in Tel-Aviv on Aug. 28, 2013. (Ilia Yefimovich/Getty Images)