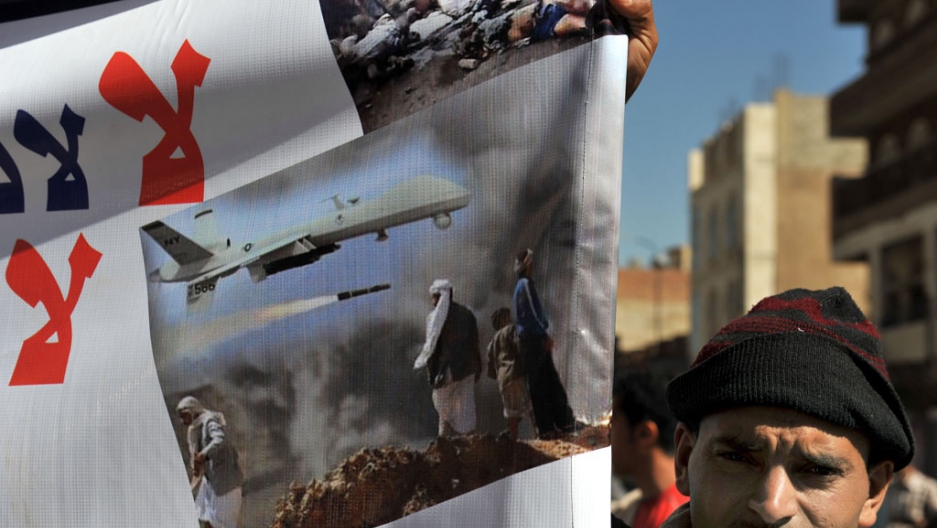 A Yemeni protests US drone attacks in the capital Sanaa, on Jan. 28, 2013.
Credit: AFP
Share

Not every bombing campaign is as well publicized as the one probably coming soon to Syria.

Here's what else the US military is up to:

The Bureau for Investigative Journalism has a wonderfully comprehensive review of the most recent US drone strikes, which appear to have been in Yemen.

On Aug. 10, US drones returned for the ninth time in 13 days, according to the Bureau, killing at least two people. The men were traveling in a vehicle through Lahj province when the drones struck.

Activist and journalist Farea Al-muslimi tweeted the names of three civilians he said were injured in the attack:

There was also an unconfirmed US drone strike on Aug. 12, in which two people were killed, according to Reuters.

Before that, but still this month, at least three people died in a US drone strike on Aug. 1, the day Yemeni President Abd Rabbuh Mansur Hadi visited the White House.

International and local media reported the dead were Al Qaeda militants, citing unnamed sources. But Haykal Bafana, a lawyer from Hadramout, said the victims were four civilians, including one child.

We are still bombing Afghanistan. According to an Aug. 26 media report, US forces bombed a police station in Afghanistan’s central province of Wardak, causing several casualties.

According to Press TV:

Attaullah Khogiani, the spokesperson of Wardak governor on Monday confirmed the US attack and told Press TV, “One policeman died and five others are badly wounded.” A team of investigators has been sent to the site of the attack.

The US military has made no comments over the issue. The attack came two days after at least two people were killed and two others wounded when US-led foreign forces carried out a raid in Goli Khel village of Wardak.

Locals identified said a woman was among the dead. US-led military forces have reportedly laid siege to the village.

On July 28, a US drone fired missiles at a home in the Shawal Valley in Pakistan, killing at least five alleged militants, with some reports suggesting eight had died. This, again, according to the Bureau of Investigative Journalism.

The militants, including Arab fighters, were having an Iftar dinner in the compound when the drone fired two missiles. Later, an hour after the drone had disappeared, a group of militants arrived and started pulling out bodies,’ tribesman Yasin Khan said. Four of the dead were Arabs, he added. The identities of those killed was not known as the attack caused a ‘huge fire’ in the building leaving the bodies ‘completely charred’.

However, a militant commander told the New York Times the drones were targeted a group of 10 fighters who had just returned from Afghanistan, where they were fighting coalition forces.