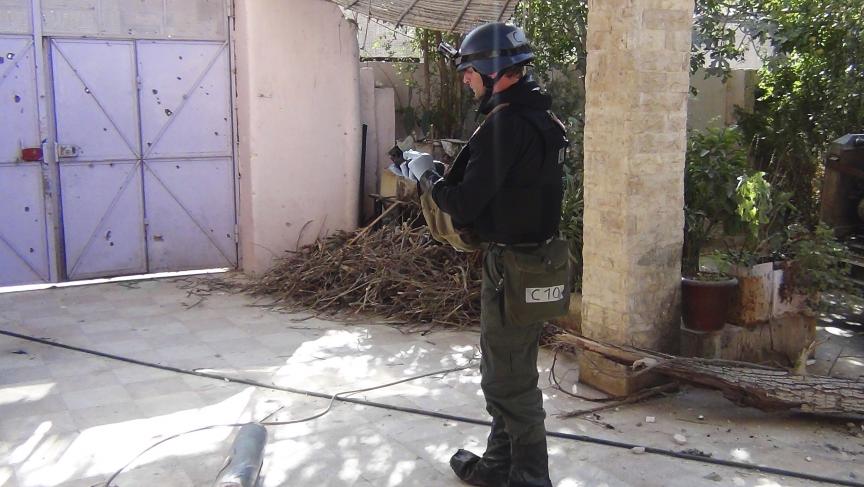 A U.N. chemical weapons expert gathers evidence at one of the sites of an alleged poison gas attack in the southwestern Damascus suburb of Mouadamiya on Aug. 26, 2013. (Photo by Ahmad Alshami/Reuters.)

The British government on Tuesday signaled its strong disapproval of the alleged chemical attack by Syrian forces last week, with United Kingdom Prime Minister David Cameron saying he would recall Parliament on Thursday to act on a "a clear government motion" and response to the incident.

The British move comes the day after U.S. Secretary of State John Kerry blasted Syria, saying there was "undeniable" evidence of Syrian government involvement in a chemical weapons attack outside Damascus last Tuesday. Outside experts say it appears the two western governments are clearing the ground for military intervention.

In a further indication of just how much pressure the west is applying, U.S. Defense Secretary Chuck Hagel told the BBC that assets have been moved into position and are ready to launch strikes immediately upon President Barack Obama's order. Hagel added that options had been presented to Obama already.

"He has seen them, we are prepared," Hagel told the BBC. "We are ready to go."

But Syrian officials remained defiant, insisting they had not used chemical weapons while promising unspecified consequences against anyone who attacks them. In a lengthy press conference Tuesday morning, Syrian Foreign Minister Walid Muallem said he "utterly and completely" denied that forces loyal to his government had carried out a chemical attack.

"There is no country in the world that uses a weapon of ultimate destruction against its own people," he said, according to media reports.

For the moment at least, Russia and China seemed to be lined up behind their Syrian clients, calling for caution and deliberation and lobbying against any military action.

It remains to be seen, however, if they can stop the momentum building in the west toward taking action.