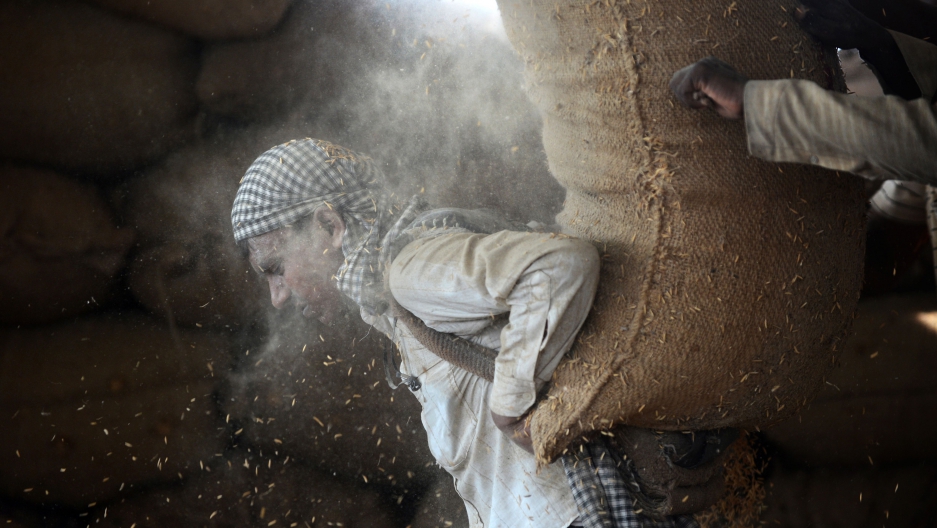 A low wage earning Indian day laborer loads a 60 kg bags of rice on his back at a grains depot near New Delhi on August 27, 2013, one day after the Indian parliament passed a flagship program to provide subsidized food to the poor that is intended to 'wipe out' endemic hunger and malnutrition in the aspiring superpower. Despite decades of fast economic growth, India still struggles to feed its 1.2-billion population adequately with more than 40 percent of children under five malnourished, according to a major survey last year.
Credit: Roberto Schmidt
Share

India’s lower house of parliament Monday approved an ambitious proposal to address child malnutrition that would provide food at a subsidized rate to nearly two-thirds of the country’s 1.2 billion people.

Congress Party chief Sonia Gandhi told legislators that approving the bill, which aims to give 11 pounds of cheap grain to poor families monthly, was a “message” to the world that India was ready to eradicate malnutrition.

The country's malnutrition rates are among the worst in the world — even worse, the World Health Organization reports, than much more economically disadvantaged countries in sub-Saharan Africa. But is the problem that India’s children don’t have access to food? Or is there more at play?

Columbia University economist Arvind Panagariya recently ignited a passionate debate about the causes of India’s high malnutrition rate with the publication of a controversial paper arguing that Indian children may be smaller than the global average, not because of poor health, but because of genetics.

In the August 24 issue of Economic & Political Weekly, several researchers published papers refuting his claims, pointing instead to behavioral causes such as female disempowerment and the widespread practice of open defecation. One point of agreement in all the back and forth: it’s not just about food.

Panagariya argues that WHO statistics exaggerate the number of malnourished children in India because they don’t account for genetic variation across race, ethnicity and culture. WHO measures malnutrition by comparing children’s height and weight to an international standard. But, Panagariya points out, studies conducted in American show that while babies of Indian descent are just as healthy, on average, as babies of European descent, they are smaller and weigh less.

“Well-nourished Indian children from within India also fail to achieve the WHO norms,” he wrote in an article for The Economic Times. “Even after we cull out a sample of a few hundred elite children belonging to families with high-school or superior parental education, car, refrigerator, telephone, color television, flush toilet and separate room for kitchen, out of a much larger sample of tens of thousands of children, they remain on average shorter than WHO norms.”

A major criticism the proposed food-subsidy program, which was launched last week by executive decree but still needs parliament's approval, has been the cost. India’s food distribution system is already the biggest in the world. If the upper house gives the go-ahead, the program is expected to bump food subsidy spending from roughly $4 billion to more than $20 billion.

“Even more importantly,” he wrote, “if a child who is healthy but is misclassified as malnourished because an erroneous standard is applied to evaluate his nutrition status, we will prescribe increased diet when such adjustment is uncalled for and, moreover, could prove harmful by turning the child obese.”

In a piece published in Economic & Political Weekly, five economists including Jean Dreze and Angus Deaton concede that genetics may play a part in stunted growth among Indian children but, they argue, “there is no direct evidence” to suggest that is the case. They instead emphasize the role of disease.

“The story of increasing longevity, and of people growing taller over time cannot be told in terms of income and food alone; it is as much or more a story of the understanding of the conquest of disease,” the economists wrote. “It could take many generations for previously malnourished populations to reach the heights of which they are capable, so it is not surprising that populations or sub-populations that are well-nourished today are still shorter than populations or sub-populations where the food and disease environments were improved long ago.”

Africa may have lower rates of malnutrition than India because it is plagued by different diseases, they wrote. Malaria and HIV/AIDS, which are more prevalent in Africa, are far more likely to kill a child than to affect his or her nutrition. Meanwhile children in India, where 53 percent of people don’t use toilets or latrines, are more likely to be exposed to diarrheal disease, which affects a child’s ability to absorb nutrients.

A World Bank Study released this month underscores the economists’ point. Researchers noted a statistically significant increase in the heights of children whose villages in Maharashtra, India, participated in a sanitation improvement program. However, while the children in the experimental group were taller than those in the control group, they still did not quite measure up to WHO’s international height standards.

Scott Gillespie, a senior researcher with the International Food Policy Research Institute, agreed that poor sanitation practices account for “much” of India’s malnutrition problem but also tacked women’s health and empowerment onto the list of drivers.

The health and nutrition of Indian women is generally poor, he wrote in a paper for Economic & Political Weekly. When they get pregnant, they pass that disadvantage on to their babies, one-third of whom are born underweight.

“Often uneducated and often still teenagers, many Indian mothers have little control over decisions and resources within households,” he wrote. By comparison, “African women tend to have more control over household budgets.”

Along those lines, economists Seema Jayachandran and Rohini Pande added that, in India, stunting varies between siblings living in the same household.

Parents may feed one child more than another, according to preference (often dependent on the gender of the child), they wrote. Indians don’t get richer as they age, so resources get diluted as they have more children. Women consume fewer calories with each pregnancy. When the babies are born, they get less supervision than their older siblings, and are more likely to get sick because of environmental conditions such as poor sanitation.

“The within-family patterns cast doubt on simple access to services (such as healthcare or sanitation infrastructure) as the explanation for variations in child height,” they wrote. “The apparent explanation is take-up of services.”