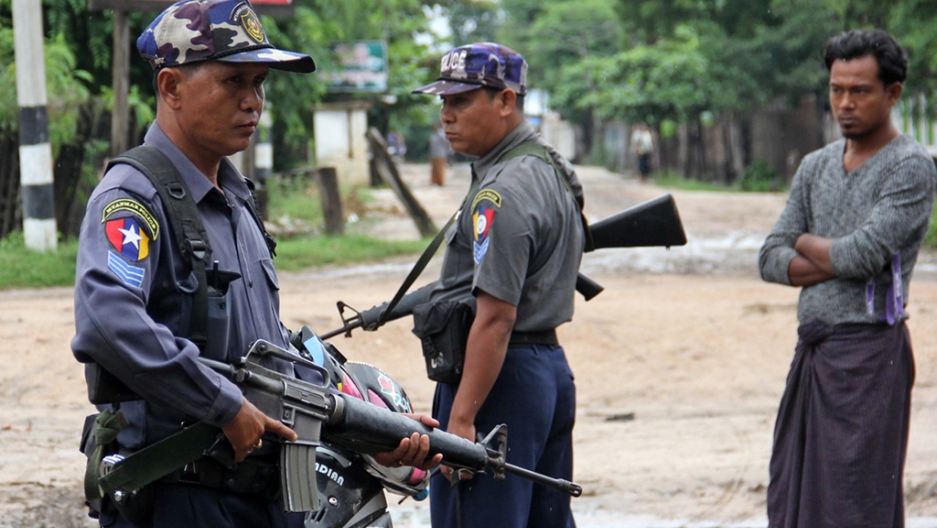 Armed Myanmar policemen stand on alert in the streets of Htan Gone village on August 26 after some 1,000 anti-Muslim rioters rampaged through villages in Kanbalu township, in the central region of Sagaing, setting fire to property and attacking rescue vehicles on August 24.
Share

BANGKOK, Thailand — It has become a near-monthly occurrence in Myanmar: a Buddhist is aggrieved, a Muslim is incriminated and a rampaging mob sets a Muslim neighborhood alight.

So far this year, many far-flung corners of Myanmar have seen explosions of anti-Muslim mob violence from the tropical shoreline to peaks nearing the border with China. But on the night of Aug. 24, a new region was added to the list: the foothills of central Sagaing state, where a village near the whistle-stop factory town of Kanbalu was rocked by vigilantes.

Their grievance: a Muslim man allegedly tried to rape a Buddhist woman as she walked home from work, according to Myanmar’s government, which estimates that 1,000 rioters stormed the city’s Muslim-majority quarter. A detailed account published by Myanmar’s The Irrawaddy news outlet describes gangs of men armed with swords shouting the national anthem as they torched homes. Via Facebook, Myanmar’s deputy information minister circulated photos from the scene of a mosque’s minarets swallowed by a tall inferno.

From each episode of mob violence, an origin tale emerges in the Myanmar press to explain how it all started: a Buddhist was defrauded by a Muslim-owned gold shop (Meikhtila in March), a Muslim woman bumped into a novice monk (Okkan in April), a Muslim man doused a Buddhist lady with gas and set her aflame (Lashio in May). All ended in torched Muslim quarters, families sent fleeing and killings.

In sum, the riots are estimated to have killed hundreds and displaced roughly 150,000, after entire Muslim-majority neighborhoods are leveled to pay for the alleged sins of one or a few fellow Muslims. But the narrative purported to explain the latest riots also furthers a refrain from Myanmar’s anti-Muslim rhetoric: Muslim men are out to prey on Buddhist women.

No public figure has done more to propagate this belief than Wirathu, 48, a popular Mandalay-based monk famous for his screeds against Myanmar’s Muslims.

Though only about 5 percent of Myanmar’s inhabitants are Muslim, Wirathu has captivated the predominately Buddhist population with fears that they will soon be outbred and overrun by Muslims secretly funded by moneyed Arab oil states. Muslims are like the African carp,” Wirathu told GlobalPost in June. “They breed quickly and they are very violent and they eat their own kind.”

He is fond of portraying Muslim men as inherently rapacious. In June, he told freelance journalist Francis Wade that, in Myanmar, “100 percent of rape cases are by Muslims.” In April, he told London’s The Guardian that Buddhists are “bring raped in every town, being sexually harassed in every town.”

The monk is also the face of an apartheid-style economic campaign known as the 969 movement, which urges Buddhists to shop only at Buddhist-owned shops to sap cash from Muslim merchants. The movement’s emblem — a rainbow-colored flag bearing the numerals 969 — is commonly fixed to storefronts, street vendors’ pushcarts and even public buses in Myanmar’s cities.

Rancor along religious lines has been laid bare as Myanmar reels from social and political change. Only two years have passed since a totalitarian military government ended five decades of direct control by ceding power to a parliament under its sway. With the backing of a longstanding former foe, the United States, Myanmar’s government is urging its deeply impoverished, segmented population to join hands and race towards modernization.

But unforeseen bursts of religious violence have blackened Myanmar’s success story. Most trace the crisis back to the May 2012 rape and murder of a Buddhist woman named Thida Htwe by three Muslim men in Rakhine State, a coastal province adjacent to Bangladesh where Islam and Buddhism coexist uneasily.

Most Muslims in the region belong to a largely destitute and stateless ethnicity known as Rohingya; many Muslims outside the region descend from Indian Muslims brought over during British rule as second-tier administrators. This woman’s killing, which set off escalating waves of tit-for-tat violence, is still evoked by Buddhist factions with an anti-Muslim agenda.

Graphic photos of her corpse circulating on social media — a relatively new phenomenon in the once heavily censored nation — have fueled Buddhist anger.

As the monk network’s chairman Aung Myaing told the outlet Democratic Voice of Burma in June: “Our Buddhist women are not intelligent enough to protect themselves.”