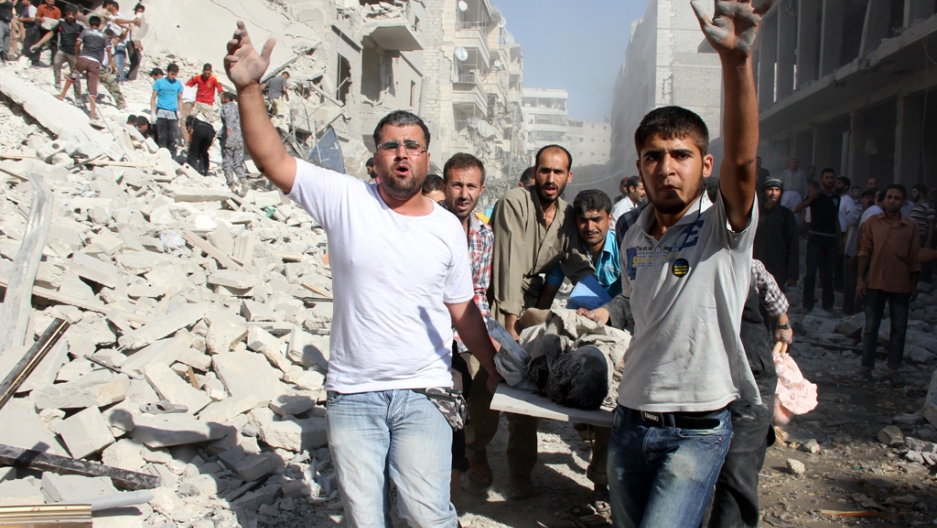 Speaking in Damascus, he said he rejected "utterly and completely" what Kerry had said the previous day.

On Monday, Kerry called the alleged use of chemical weapons in Syria "undeniable" and a "moral obscenity," in the strongest remarks yet from the Obama administration.

Speaking on Monday afternoon, Kerry said the significance of the attack that left hundreds dead went beyond Syria itself. "This is about the large-scale, indiscriminate use of weapons that the civilized world, long ago, decided must never be used at all," he said.

"What is before us today is real. And it is compelling," Kerry continued, adding that President Barack Obama was determined to hold Syria accountable.

Kerry accused Syrian President Bashar al-Assad's regime of failing to cooperate with chemical weapons inspectors from the UN "at every turn" and destroying evidence of the attack through shelling. "That is not the behavior of a government that has nothing to hide," Kerry said.

"Our sense of basic humanity is offended, not only by this cowardly crime, but also by the cynical attempt to cover it up," he added.

Kerry said that the Syrian government's delayed decision to allow a team of UN inspectors near the site was "too late."

They met with and took samples from victims of the attack in the eastern Ghouta region, which reportedly killed hundreds of Syrian civilians, according to a doctor who spoke to Reuters.

UN Secretary-General Ban Ki-moon said the team's vehicle "was attacked by an unknown sniper, but despite such very difficult circumstances, our team returned to Damascus and replaced their car and proceeded to a suburb of Damascus to carry on their investigation."

No injuries were reported, but the lead car was damaged, causing investigators to return to a government checkpoint where they obtained a new vehicle and return to the site.

"They visited two hospitals, they interviewed witnesses, survivors and doctors, they also collected some samples," Ban said, noting that the UN would "register a strong complaint to the Syrian Government and authorities of opposition forces" so that an attack like that on the UN convoy would not happen again.

The UN quickly released a statement, asking that rebels and the forces of President Bashar al-Assad allow investigators to safely enter the area and do their job.

In its daily press briefing, the White House echoed Kerry's remarks that use of chemical agents in Syria was "undeniable." Spokesman Jay Carney stressed that Syria needs a political solution, not a military one.

Syrian state media claimed an unknown source had told them "armed terrorist groups opened fire on members of the UN team" as they were entering the al-Muadamiya area.

The UN inspection team entered the country on Aug. 18 with the government's approval to visit three sites suspected of being subjected to chemical weapons attacks.

Another incident occurred on Aug. 21, while the UN team was in Syria, with doctors and activists claiming an unidentified nerve agent had killed hundreds of innocent civilians. The Syrian government delayed granting access to the site outside Damascus.

Even if the team were to reach the area, the United States said evidence from the attack has likely deteriorated or been destroyed by heavy government shelling.

However, experts said evidence of any nerve agent would remain traceable in hair and tissue from victims of the alleged attack.

Britain, France, Turkey and Germany have all said they would support some sort of international response to the alleged chemical attacks, even if the UN Security Council remains split along its usual political lines, with Russia — Assad's stalwart ally — attempting to block military intervention.

The Syrian opposition said Monday that the Geneva talks, an effort to engage both sides of the Syrian conflict backed by the United States and Russia, were off the table.

Also on Monday, Chancellor Angela Merkel's spokesman Steffen Seibert said Germany would back a military response in Syria if it were somehow proven that Assad's forces had used chemical weapons.

"Germany would be among those who consider consequences to be appropriate," said Foreign Minister Guido Westerwelle in a statement on Monday.

Merkel spoke with France's President Francois Hollande and Britain's Prime Minister David Cameron and said any alleged use of chemical weapons in Syria breaks a taboo and requires an international response.

The United States and its allies believe Syria has stockpiles of sarin and mustard gas, though the regime has never admitted to possessing chemical weapons.

This video, provided by activists, allegedly shows UN inspectors talking to victims at the site of the attack on Monday: