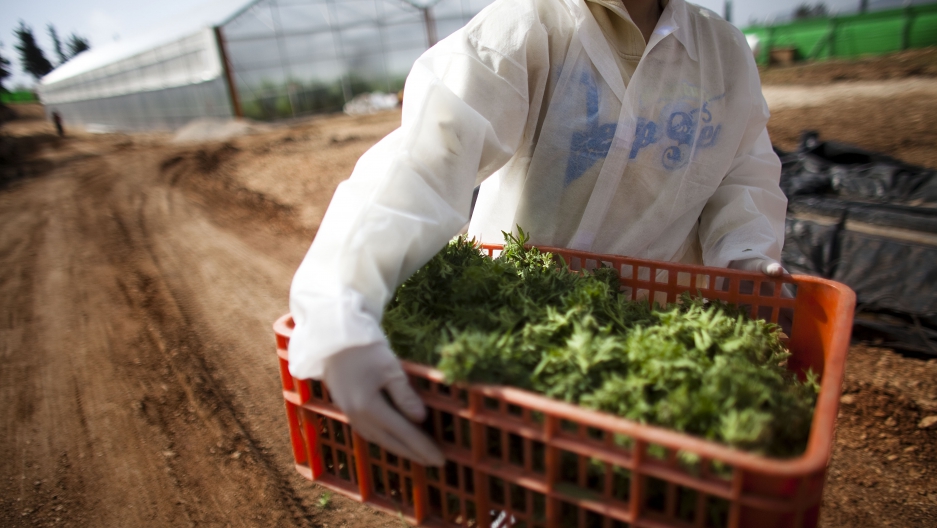 A worker carries medical marijuana at the growing facility of the Tikun Olam company on March 9, 2011 near Safed, Israel. The country has long been a pioneer of cannabis research.
Credit: Uriel Sinai
Share

JERUSALEM — An award-winning professor of medicinal chemistry and natural products at the Hebrew University of Jerusalem, Raphael Mechoulam is a trim gentleman who wears tweed jackets and silk scarves.

He is no slacker. At 82, he still works full-time.

Despite Mechoulam's respectability, his greatest fame stems from two scientific breakthroughs that may earn him a warm welcome among denizens of /r/trees.

In 1964, he was the first person to synthesize THC, tetrahydrocannabinol, the principal active ingredient in weed. That leap is what has enabled the scientific study of cannabis.

Before him it was all myths and smoke.

Mechoulam is almost universally referred to as the father of research on cannabinoids. (But no, he has never partaken in the stuff, he says.)

In fact, CNN's Sanjay Gupta spent a few days in Mechoulam's lab while researching what became his very public about-face this month on the usefulness of medical marijuana.

In 1992, almost three decades after synthesizing THC, Mechoulam identified anandamide, a naturally occurring human cannabinoid neurotransmitter, (translation: the stuff that makes you feel high when you haven't ingested anything.)

Given the opportunity to name it, Mechoulam turned to the Sanskrit word ananda, meaning supreme bliss.

Parallel to these achievements, Mechoulam has spent the better part of a lifetime trying to secure approval for scientific experiments — only to crash into the disapproval of officialdom. "An academic lab is an open place," he says, "and to have young people in the lab working with illegal stuff… How can the head of a lab determine whether the kid who is working on it isn't taking a bit under the table?"

When just starting his research, in the early 1960s, Mechoulam found some unlikely allies: the narcs. He had a few friends who were cops: "Someone would say 'hey, could you give him 5 kilos of hash? I know the guy.'"

Et voila: his career was launched.

Mechoulam is still fighting. He recently helped save Israel's groundbreaking medical cannabis program from yet another assault by Health Ministry bureaucrats, who tried in late June to limit the forms and varieties of medical cannabis available at legal clinics.

Among other things, the ministry threatened (but failed) to ban Avidekel, a locally developed strain of cannabis containing less than 1 percent THC, the element that gets you high, and 16 percent CBD, a palliative cannabinoid that has no side effects. In other words, it doesn’t get you high.

The ministry's principal concern was that CBD has yet to be isolated and tested in laboratory conditions, in the way that paracetamol, for example, was tested. "Scientists do not like to work with an unidentified mélange when evaluating a compound," Mechoulam explains.

Dr. Boaz Lev, the ministry's Associate Director General, says "remember that what we all want is the best for these patients, a medication that we know and understand and can responsibly prescribe them."

It is easy to giggle about a bum subspecies of weed like the Israeli-developed Avidekel, but for a child undergoing chemotherapy who hopes to keep going to school, non-narcotic cannabis is no laughing matter.

One medical professional said the ministry was thwarted "because Mechoulam stood beside us and never budged, and in the end they couldn't say no to him."

By any measure, he is one of Israel's most renowned scientists.

His groundbreaking article on the synthesis of THC was published almost 50 years ago, in the Journal of the American Chemical Society. Since then, he has been a recipient of numerous research grants awarded by the National Institutes of Health, in Washington, DC.

An experiment he supervised 15 years ago at Jerusalem's Sha'arey Tzedek Hospital had the remarkable result of diminishing the side effects of chemotherapy on "every single child" who was given TCH in drops, under the tongue. "The nausea and vomiting simply stopped. And when the chemo ended, we stopped the treatment," he recalls.

Despite this, legal complications stemming from illicit nature of marijuana have almost completely prevented ongoing research on the effects of THC on cancer patients.

Mechoulam says this is "tragic." Others in Israel are calling it criminal.

The beneficial effects of cannabis for pain relief and in combating chemotherapy's side effects have long been documented. But now, experiments on cancerous growths themselves, conducted by the Spanish researcher Manuel Guzmán, show outstanding results in reducing the size of tumors in human beings.

Professor Avinoam Reches, a Hadassah Hospital professor of neurology, who as chairperson of the ethics committee of the Israel Medical Association has presided over numerous discussions on the use of medical cannabis, prescribes cannabis to patients with diagnoses known to benefit from its palliative treatments such as Parkinson's Disease and Tourette's Syndrome.

Asked to name any colleagues in the world of Israeli medicine who oppose this use of cannabis, Reches replied "no one comes to mind. I can't think of anyone."

"I use cannabis in routine ways in my patients, according to the directives that are part of the medical consensus," he said, underscoring his practice of prescribing cannabis to long-term patients whose case histories he knows well, and mentioning the wariness he feels towards "people who I have never before met, who come in with specific complaints, asking for cannabis. These people do not always tell the truth," he says, "and have a tendency towards over-use or abuse of the drug."

Reches said he found it "astonishing" that questions presented to the NIH regarding scientific research on medical marijuana are directed to the National Institute on Drug Abuse.

Mechoulam is looking ahead. "Governments," he says, "should set aside the recreational aspects and find a way to allow scientific research to advance."