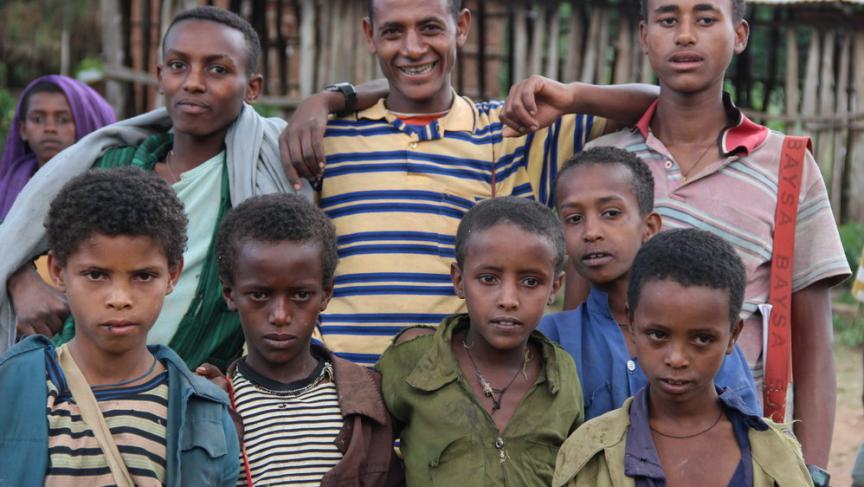 Children in the village of Addis Zemen, Ethiopia The country has one of the highest birth rates in the world. (Photo: Anders Kelto/PRI's The World)

In northern Ethiopia, near a village called Addis Zemen, boys herd cows across an open pasture. Barley and wheat fields surround them, and mountains rise up in the distance.

For centuries, farming has been a way of life here. And having lots of children – to herd cows and plow fields – has been the norm.

But some people are trying to change that.

"Christianity is not opposed to contraception. It's opposed to killing and lying - not to birth control,” says Teguna Asmara, a priest with Ethiopia's Orthodox Christian church. Standing in an open field, he wears a dusty white robe and speaks to a group seated in a circle.

Behind Teguna are two government health workers in white medical coats. When Teguna finishes speaking, one of the women, Argorye Kulueymehken, steps up to address the group. She says that having too many kids, and not spacing pregnancies, increases the risk of illness and death for mother and child.

These kinds of meetings – called “community conversations” – are happening all over Ethiopia. The government has organized them because it is concerned about the country's birth rate and wants to change public attitudes about family size.

Health worker Argorye Kulueymehken says she targets women who are having a lot of children.

"We approach them as sisters, and we say, ‘Look, you are pregnant and you already have two babies – look at how you are struggling,’” Argorye says.

That message is getting through to a lot of women. One is Neya Gosh.

Outside her wooden hut, Neya crushes corn meal with a heavy stone, while chickens peck in the dirt around her. She and her husband are farmers, and they sell traditional beer. Neya says when she first got married, she wanted a lot of children.

"We wanted at least five. But then we met with the health workers, and they changed our mind,” Neya says.

She and her husband decided to have just two kids. Neya began using a contraceptive injection, which she gets from the government for free. The couple was publicly praised by the government and received a certificate, which hangs on the wall of their hut, recognizing them as a “model family.”

Neya says she has noticed a shift in attitude in her village. "Large families used to be admired,” she says. “Now, it's people who use birth control and only have a few children who are respected. Families with a lot of children are criticized."

Neya credits that change in attitude to the government health workers.

Role of the Government

The Ethiopian government decided to tackle the issue of family size for economic reasons.

Ethiopia's foreign minister, Dr. Tedros Adhanom, says the country has an unhealthy age structure – too many kids, and not enough breadwinners. Tedros says that puts a big financial strain on the country, and it needs to change.

“Having a healthy age structure, more workforce, is really important,” he says.

One way to improve that age structure is for the country to have fewer children. But Tedros says the government never tells couples how many kids they should have because that is, ultimately, a personal choice.

“We don't put a number, saying, this number is good,” Tedros says. Instead, the government teaches families about the benefits of having fewer children, and it lets parents decide for themselves.

International health organizations often praise Ethiopia for its non-coercive approach to family planning, and for making free contraception widely available. Over the past decade, the country’s fertility rate has fallen, at least a little.

But how low should that number go? What is a proper family size in a country where having six, seven, or eight kids has long been common?

Teguna Asmara, the Orthodox priest, told me families should have five children. I asked him if that was a lot.

"We're farmers,” Teguna said. “We need children to help with the cows, and to farm and clean. Five is a good number.”

A woman in the village told me she had seven children – and she thought that was a good amount.

So what is a small family in Ethiopia these days? It depends on whom you ask.