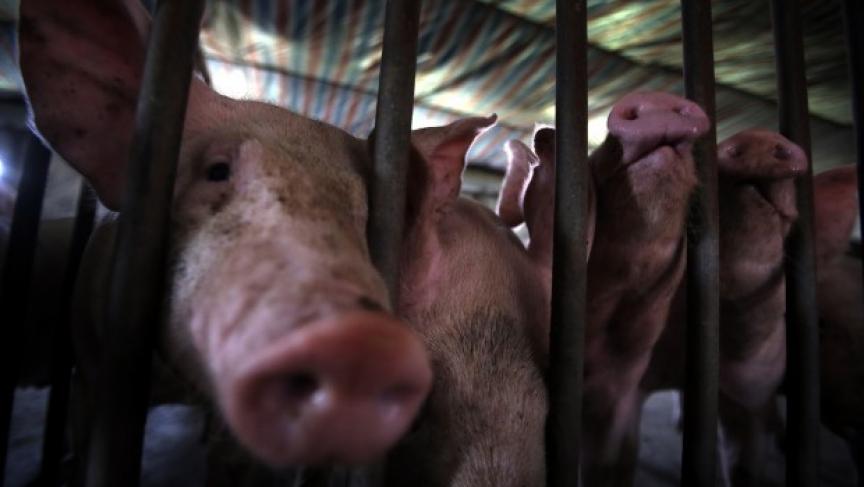 Pigs can be seen standing in their pens at a farm located on the outskirts of Beijing September 7, 2012. To match Analysis CHINA-ECONOMY/PORK Picture taken September 7, 2012. REUTERS/David Gray (CHINA - Tags: BUSINESS EMPLOYMENT SOCIETY) - RTR37QON

Cheap meat is a cornerstone of the American diet. Think cheeseburgers and t-bones and ribs.

It’s the same in China. Only there, the meat of choice is pork and demand is going through the roof.

Check out the menu at just about any Shanghai restaurant and you’ll find plenty of pork offerings: mu shu pork, braised pork pancakes, and pork soup dumplings. Pork is big in China. In fact, half of the world’s pigs are raised in the country.

China is also a huge producer and consumer of antibiotics.

About 70 miles southwest of Shanghai is Jiaxing. It’s home to dozens of pig farms. Along its roads, veterinary pharmacies are slotted between feed stores. China doesn’t require farmers to report the antibiotics they use but one recent study estimated that nearly half of China’s antibiotics are fed to livestock.

The feeding operation takes place in a big confined building that looks more like a factory than a farm.

The manager of the farm wouldn’t agree to an interview. But another employee did, even though she wasn’t authorized. She said visitors have to change their clothes and shoes before entering so as not to bring in any bacteria.

A big, crowded confinement farm like this one can be a hothouse for infection and disease. This is where the antibiotics come in and Concentrated Animal Feeding Operation (CAFO) operators often counter the threat of disease with daily doses of the drugs. They also say steady, low-dose antibiotics promote growth, which boosts efficiency and profits. It’s a practice that began in the United States.

“It takes a few months here for the pigs to grow big enough for sale. The pigs are fed really good materials,” said the unidentified employee.

But a rising tide of science around the world, and here in China, suggests otherwise. That’s because feeding antibiotics to livestock day in and day out has a perverse effect. It pushes the evolution of bacteria that are resistant to the drugs.

“Antibiotic resistance is of course a strong selective force in the microbial world because if an organism doesn’t develop a resistance it will die,” said Michigan state microbiologist James Tiedje.

Tiedje and a group of Chinese scientists recently analyzed hog manure from three commercial farms in China and discovered the drug resistant bacteria were abundant.

That’s no surprise. The phenomenon of growing drug-resistance on such farms has been known for years. It’s also well known that the genes for drug resistance can hop from one kind of microbe to another, causing the resistance to spread.

What was surprising in the study was the degree to which different genes for resistance to different drugs tended to cluster and hop around together.

“This is what leads to the multiple drug-resistance-problem pathogens,” Tiedje said. He stresses the kind of pork production on these farms is not unique to China. But with 1.3 billion mouths to feed and a growing appetite for meat, China is taking it to a new scale.

And many scientists say that means there’s also a growing risk here of multiple antibiotic resistant pathogens spreading to humans-through groundwater, on dust particles, or on produce that’s been grown using animal waste as fertilizer.

“The big problem is the resistance can be transferred to human beings and also could be transferred globally by food export or import,” said Dr. Xiao Yonghong, the project coordinator at the Antibacterial Resistance Investigation Unit of China’s Health Ministry.

Scientists have already identified a strain of staph known as “livestock-associated MRSA” (1) (2) that can infect humans and is resistant to several common antibiotics. Xiao says he’d like to see the Chinese government phase out antibiotics, at least as growth promoters. He’d like to see farmers switch to vaccines to prevent disease. And, he stressed that other countries need to do the same, or the future could look like the past.

“That means before the 1940s, before the introduction of penicillin, we couldn’t treat patients infected with bacteria,” he said.

Professor Tiedje of Michigan State says there are precious few new antibiotics in the pipeline to replace those compromised by antibiotic resistance. And he thinks this could spell big trouble.

“I consider it one of the major problems for humans in the future. Along the lines of climate change, for example.”

And it’s a concern that’s shared at least somewhat by some of China’s smallest farmers.

Not far from the big factory farm in Jiaxing, Sun Zhi Geng raises about 60 pigs on a small lot tucked between rows of yellow rapeseed. He gives his animals a high-protein commercial feed but he leaves out a dose of antibiotics that the producer says should be mixed in.

Still, Sun worries about what other farmers feed their pigs. Enough that he tries not to eat anyone else’s pork.

“Of course I’m worried,” he says. “When we buy meat from the butcher, we wait until they kill our pigs.”

Sun at least knows what he’s eating. But antibiotic resistant bacteria cooked up in another nearby farm could still be in the fertilizer of a neighbor’s field, or floating by on a dust particle.

As Dr. Xiao of China’s health ministry points out, antibiotic resistance affects all of us, regardless of where we live, or what we eat.