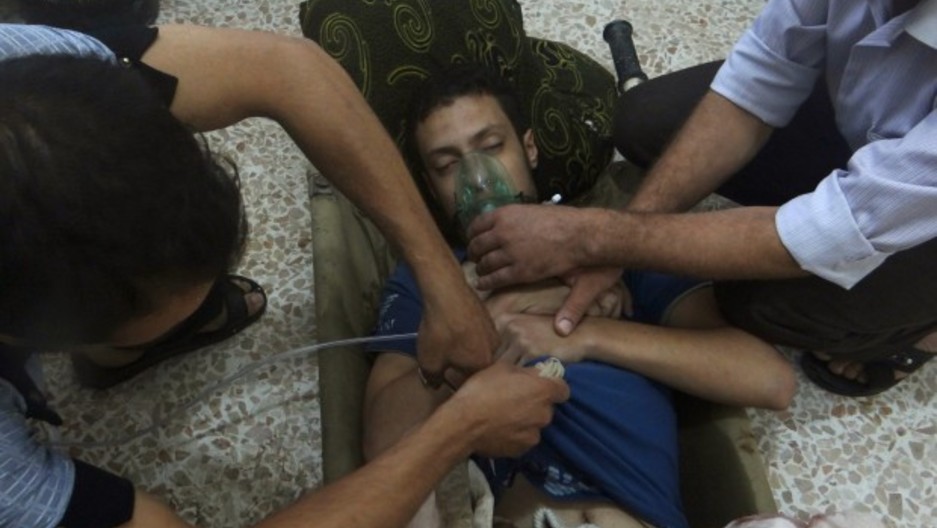 A man, affected by what activists say is nerve gas, breathes through an oxygen mask in the Damascus suburbs of Jesreen August 21, 2013. Syrian activists accused President Bashar al-Assad's forces of launching a gas attack that killed nearly 500 people on Wednesday, in what would, if confirmed, be by far the worst reported use of chemical arms in the two-year-old civil war. The Syrian armed forces strongly denied using chemical weapons. Syrian state television said the accusations were fabricated to distract a team of U.N. chemical weapons experts which arrived three days ago. REUTERS/Ammar Dar (SYRIA - Tags: CONFLICT POLITICS CIVIL UNREST) - RTX12SC9

Share
If you've been following what's going on in Syria and you're confused, you're not alone. On Wednesday night, there was an alleged chemical weapons attack outside Damascus. Hundreds of people were reported killed and thousands affected. If you can stomach them, take a look at some of the videos and pictures on social media. But also remember, those images may not be real. The opponents of President Bashar al-Assad say he ordered the strikes. Assad's government says the rebels launched chemical weapons. In the meantime, the west and the international community wait for verification before, just what exactly? Well, before doing anything, including issuing another warning about not using chemical weapons. They don't add up to a smoking gun. But the videos posted online are difficult to watch. People can be seen convulsing and struggling to breathe. Bodies of the dead are wrapped in white sheets and lined up in rows. Many of the victims are children. Swiss chemical weapons expert, Stefan Mogl has reviewed many of the videos. And he takes note of certain symptoms: the gasping for air, contracted pupils, secretions of the eyes and nose, and muscles spasms. Mogl told the BBC today that they all point to one thing. "My conclusion is–and I have to be very careful with this–the symptoms, in my view, are consistent with the exposure to a nerve agent," Mogl said. Mogl suspects the specific nerve agent was sarin gas. The Syrian military is thought to have stockpiles of the chemical. But definitive proof that sarin was used would require taking blood or urine samples from the victims, or environmental samples from the site of the incident. Mogl said "the sooner that happens, the better." Early this morning, opposition activists said the body count from Wednesday night's alleged chemical attack was still climbing. Spokesman for the Syrian National Coalition, Khaled Saleh said the group had documented 1,360 casualties. But he added, "we just discovered a neighborhood in Zamalka, where there are houses full of dead people." "So, you'd expect the numbers to grow," Saleh said. "It's quite heartbreaking when you talk to activists who are going from one house to the next and they're just pulling dead bodies, you know, one dead body after the next." The United Nations wants its inspectors to be able to investigate the site without delay. A group of 20 UN weapons inspectors arrived in Damascus on Sunday. The hotel where they are staying is only a 15 minute drive from the neighborhood where the reported incident took place. But it's not clear if the Syrian government will comply. What's also not clear is how Washington might respond. If Wednesday's attack is verified–and some see mounting evidence that it will be–it could turn out to be the most egregious violation yet of President Obama's own red line on the use of chemical weapons. US Ambassador to the United Nations Susan Rice responded to early reports of the attack on Twitter. But the Obama administration has shown no willingness to live up to such promises. Charles Duelfer led the American search for weapons of mass destruction in Iraq back in 2004. He said the prospect that the Syrian government might be allowed to use chemical weapons and get away with it, is terrifying. "I feel very sorry for those weapons inspectors because everything is going to turn on what they say," Duelfer said. "It's almost [as if] their finger is on the trigger of what the international community is going to do." For people like Khaled Erksoussi though, the endless debates about what to do in Syria sound more and more irrelevant. He's the head of operations for the Syrian Red Crescent in Damascus. "It's frustrating," he said. "When you see all those pictures and you see all this suffering in those areas," Erksoussi said. "You scratch your head, ' …did they see the same picture I saw?' Because what I saw in those pictures is that people need help." Erksoussi said his ambulances are on standby. They are sitting only a few miles from the site of Wednesday's alleged attacks. And all they need is a green light to get to work.