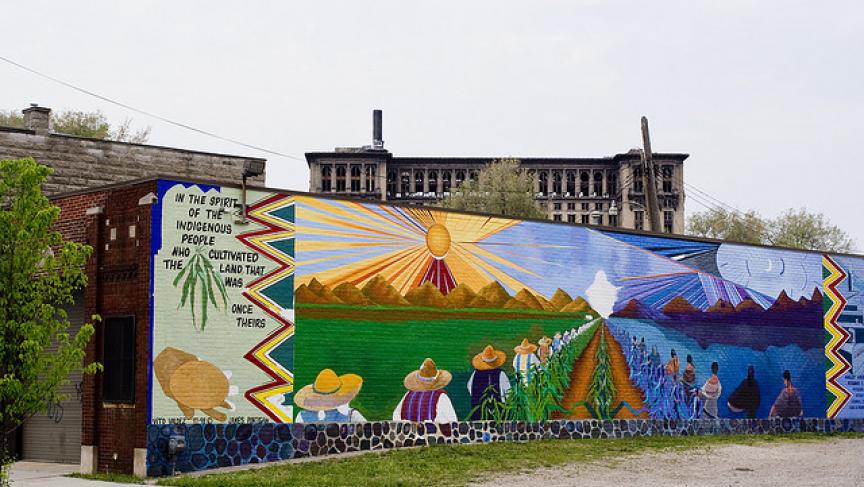 NEW YORK -- Since Detroit filed for the largest municipal bankruptcy in American history last month, ethnic media publishers and editors have found a common thread among their communities: despite the dire economic challenges, ethnic communities remain resilient and hopeful, looking for opportunities amid the turmoil.

Detroit's bankruptcy has brought huge disruptions -- a spike in unemployment in a city that already has a jobless rate that is more than double the national average of 7.6 percent; plummeting property values; cutbacks in city services such as dispatch system for fire, police and ambulance; and an uncertain business climate that could hamper future investments.

But, despite the woes, ethnic media journalists and publishers said that many immigrants see opportunities in the city, and that they are pursuing their American Dream, while helping to revitalize the city.

"Everyone could feel the pain," said Tack Yong Kim, publisher and executive editor of the Michigan Korean Weekly. "And yet if we flip the coin, we see an opportunity for investments."

Kim's newspaper has reported on the impact of bankruptcy on small- to medium-size Korean businesses in Detroit, looking at how they have found creative ways to survive. The paper, for example, ran a story on Korean-owned wig and beauty shops expanding their clientele to other ethnic groups, as African Americans, who make up their customer base, are leaving the city.

Most Korean business owners -- about 300 of them in the Detroit metropolitan area -- would like to stay and turn the crisis into new ventures, Kim said.

"They live here; they are not going anywhere," he added. "There are many abandoned areas, but that opens the door to create a business zone, with cheap land and labor. We definitely have room for improvement."

Gutierrez said that Latinos, many of whom work in surrounding plants and factories, are part of "the solution" to the future of Detroit. And, with the growing Latino population, he noted, his community has a significant voting bloc to potentially change Detroit's political landscape.

While Detroit's population has gone down by about 26 percent, the Latino population, particularly in the southeast side of the city, known as the "Mexicantown," continues to rise, along with Latino-owned businesses.

Over the last two decades, according to census data, Detroit's Latino population nearly doubled to 50,000 in 2010. Latinos in the city are also fairly young, with a median age of 24.

According to an Associated Press report, more than $200 million in the past 15 years has been invested in "Mexicantown," a few miles from downtown Detroit. This investment has attracted more restaurants, retail stores, and new residential buildings, including an $11 million condominium development.

Gutierrez regretted that Latinos, despite their growing population, still do not have a political voice in the city. "We don't even have a Hispanic representative in the council, and they [officials] don't even [see] that as an option."

A boon in a time of bankruptcy

In the Arab-American community, some view the city's bankruptcy filing as the right time to acquire properties, as real estate prices have plummeted in recent years.

"I have seen Arab immigrants buying houses," said Rasheed Alnozili, publisher of the monthly Yemeni American News. "You can get a house for $10,000. I have friends and relatives who even bought four houses and lots."

Arab Americans make up at least 200,000 of metro Detroit's population, and produces almost $8 billion in salaries and earnings, according to a 2007 Wayne State University study.

Over the last decade, an influx of Arab immigrants into Detroit has boosted businesses such as gas stations, liquor stores, apparel and convenience shops. A 2010 report of the American Arab Chamber of Commerce found that more than 15,000 businesses in metro Detroit are owned by Arab Americans.

"Those kind of investments that immigrants are doing here would help Detroit's fast recovery," Alnozili added. "The abandoned lots could be turned into a more decent housing or commercial space."

Gina Steward, publisher and editor of the Telegram, a weekly publication that serves the African American community, said that in the black community, many are coming back to Detroit.

"Although bankruptcy seems so final, there are training opportunities out there, and African Americans are taking advantage of them," said Steward. "They are now taking classes to improve their chance of getting a job."

The Telegram has been covering "the reactions and thoughts in the black community and what can be done" in the time of bankruptcy. Many African Americans, according to Steward, do not agree that the last resort for the city was to file for Chapter 9.

"A lot [of people] in the [African American] community are not working because they just don't have the skill set that is required. Now they are taking classes," Steward said. "I just hope that companies here would stop bringing their own workers with them when they set up their business and would start offering it to local residents."