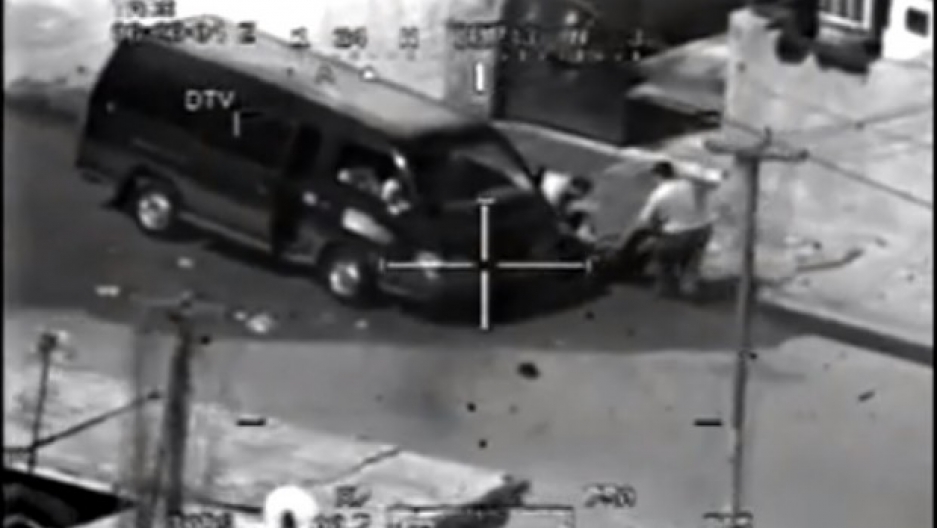 Screen grab from video leaked by Bradley Manning to Wikileaks, showing a US helicopter attack in Baghdad, Iraq in 2007. (Photo: Wikileaks)

Share
Three years after the Wikileaks saga began, there will still be plenty to talk about beyond the fate of convicted US soldier Bradley Manning. After all, this was a trove of hundreds of thousands of previously classified US diplomatic and military cables. "Cablegate," as it's come to be known, was the third and by far most extensive set of disclosures from Wikileaks. It consisted of a massive pile of official communications from US personnel based abroad, hundreds of thousands of documents in all, mostly written for colleagues and officials back home in America. "What makes Wikileaks unique is that it literally touched on just about every relationship the United States had with every other government around the world," said P.J. Crowley, former Assistant Secretary of State for Public Affairs. Crowley resigned his position after making public comments about the mistreatment of Bradley Manning. In an interview with The World today, Crowley conceded that the information revealed by Manning will be part of the global conversation for years to come. But he said what is most remarkable, is that there is so little in the cables that is truly remarkable. "For the most part, they show due diligence on behalf of US diplomats around the world doing the nation's business day in, day out," he said. "Obviously, a handful of cables led to awkward moments." Those moments included blunt assessments from American diplomats referring to world leaders as vain, corrupt, or even crazy, which "can make dealing with that particular government very, very difficult. And that's what we found," Crowley said. But for experts like Derek Scissors of the Heritage Foundation, where he covers the Chinese economy, "cablegate" has been, at times, a gold mine. For example, there was an often-cited quote from Chinese official Le Keqiang. "He says, 'Oh, Chinese economic statistics are man-made,' in this dismissive fashion. 'I don't pay attention to them,'" Scissors recalled. Li's comments were made prior to him taking on his current job as China's premier. But they were revealed by Wikileaks, "after we find out that he's going to be running the Chinese economy," said Scissors. "It was extremely embarrassing," Scissors said. The comments have received, "a tremendous amount of play, [and] I grabbed it myself as soon as I saw it because it was wonderful." Of course, some of the details exposed by Wikileaks about US foreign policy are far from wonderful. There was the infamous video of an American helicopter attack in Baghdad, showing the deaths of innocents. "It was always shocking and disgusting to read fresh details of innocent civilians that were killed by US troops or US air power [in Iraq and Afghanistan]," said Greg Mitchell, who spent months pouring through Wikileaks cables researching his book about Bradley Manning. "There was a whole [US] program in effect where family members and survivors were paid small sums of money to go away." In general though, the Wikileaks cables have tended to confirm things many analysts already knew. "They're like gossip," said Barbara Slavin, an expert on Iran who writes for Al-Monitor, a website that covers the Middle East. She is also the author of a book about US-Iranian relations. Slavin said the cables didn't teach her much new about Iran or US policy toward Iran. But they did reveal something about the American diplomats who authored them. "They were extremely well-written," Slavin said. "I've known many fine foreign service officers, of course, but I didn't really know how well they could or couldn't write." "These cables are rather good and would stand up pretty well in journalistic circles." But these were official communications there were meant to be classified. Former State Department official P.J. Crowley pointed out that in many instances the cables contained the phrase "strictly protect." That means they contained information that could put people in danger if they were released publicly. "That's exactly what happened," Crowely said. "People have had their careers turned upside down, their lives turned upside down, who've been intimidated, jailed and in some cases killed." Crowley said he cannot definitively point anyone who was killed because of a specific Wikileaks cable. But he said that neither can Julian Assange, the head of Wikileaks, argue that none of Bradley Mannings disclosures led to any deaths.