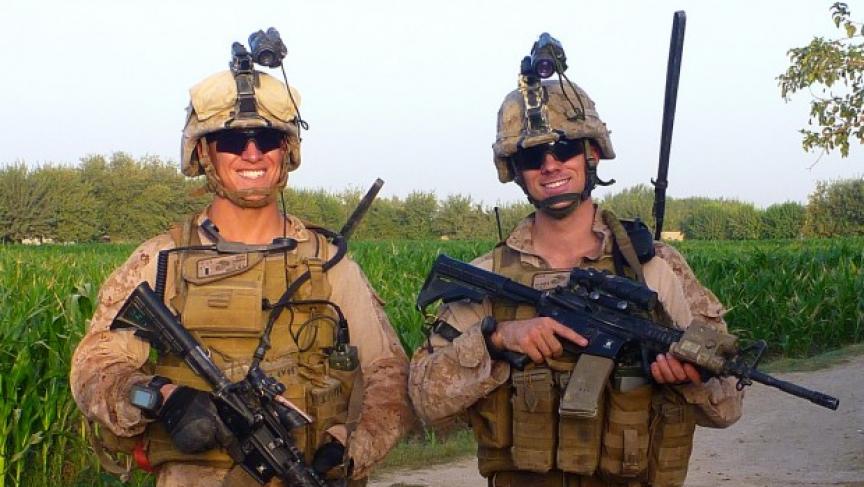 Lts. Haft (L) and Suarez (R) after a raid in Afghanistan. (Photo: courtesy of Michael Haft and Harrison Suarez)

American soldiers have – through the years – gone to extreme lengths to make it.

Take the Battle of Bulge during World War II. It's the winter of 1944-45, one of the coldest ever recorded in Europe. American troops are dug in around the Belgian town of Bastogne, surrounded by Germans.

And freezing in his foxhole, awake for God knows how many hours guarding the line, is Corporal Forrest Guth, who just wants a damn cup of coffee. But he'd have to heat it up, and that means starting a fire. The problem is that Guth's superiors have explicit orders for him. No fires.

"Don't start any kind of fire, the Germans have this area zeroed, if they see smoke coming up, they'll drop a mortar in your foxhole," says military historian Martin King, who heard the story first-hand from Guth himself.

King, author of a new book called The "Tigers of Bastogne," says Guth would go for another two weeks before he could get a cup of coffee. Guth told him he didn't get any joe until after the Americans took the pivotal town of Foy from the Germans.

"He said the main motivation for getting stuck into these Germans was so he could brew up," King says. "Which he did, as soon as they surrounded the town. The fight took about four hours, and as soon as they had the Germans surrounded, he got the billycan going and got the coffee made."

"He said that was the best cup of coffee he'd ever had in his life. If anything that was proof you were still alive."

Now, a new generation of American military personnel are, well, addicted to idea of a cup of coffee. Take a look at Michael Haft and Harrison Suarez in the picture at the top of this post.

"We had no idea going into this, how closely interwoven the history is between coffee and the military. In hindsight, it makes perfect sense that we would become obsessed with brewing coffee," says Haft.

Suarez says they first got the coffee bug during officer training class at Quantico.

"There would be a 10 minute coffee break, and all these young lieutenants would file out of the classroom, drop a dollar in the tin, fill up their styro-foam with awful black coffee, and hope the caffeine would keep them stimulated for the next hour of class," Suarez says.

"It wasn't until later that we realized, okay, there's a lot more to coffee than just the caffeine."

Both Suarez and Haft deployed to Afghanistan, where they were stationed in Helmand province, just several miles apart.

On patrol, Suarez says, there were constant reminders of how important coffee is to a Marine.

"Several times we observed our Marines taking coffee grounds, and putting them between their teeth and their lips, like chewing tobacco, to kind of extract some of the caffeine in that way. Not the best recipe for good coffee, but certainly effective."

When they could, though, Suarez and Haft would get together to make a proper cup of coffee and talk. They used a Vietnamese coffee set and some beans that one of Haft's friends had sent in a care package.

Haft says he even tried to make a cup for some of the Afghan officers he was training.

"We spent many hours drinking tea together. So, I brought my little coffee set-up over to their side of the base. And made them a coffee with a little sweetened condensed milk, and they took one sip, and said, 'No, this is not what we drink. But, you can keep drinking tea with us though.'"

Haft and Suarez brought their growing appreciation for good coffee back to the US from Afghanistan.

Even before they finished their stint in the Marine Corps earlier this year, they were already planning to write a book about coffee.

Their new e-book, "Perfect Coffee at Home," is out now.

Harrison Suarez says that along the way, they heard some … enlightening … stories.

"Vietnam vets told us they would take their helmets, flip them over, and fill it with water and coffee grounds. And then they would heat that, and that's how they would make our coffee and share it communally."

Oh, and how would they heat it up?

"They would take small bits of C-4 from Claymore mines, and they would use that as a campfire stove," Haft says.

"If you use too much of it, the whole thing just explodes and you blow up your coffee setup and hopefully not yourself. But if you can get the right amount of C-4, and burn just a little bit of it, you can get great coffee so we're told."

So maybe it's not ALL "just about the grind."

In the course of reporting this story, we received some great responses from vets and their families about the lengths to which they would go to get some coffee.

Here are some of my favorites:

"Pull that packet of instant Joe from the MRE pour in to my mouth then rinse down with water from canteen sometimes adding a sugar packet." – Travis Neece, Ukiah, CA.

"Energy drinks like Monster and Rip It are very popular. Coffee is what the older/senior guys drink." – Glenn Babst, Tuscaloosa, AL.

"Make a stove out of the bottom of two soda cans. Use hand sanitizer for propellant. Boil water and pour slowly over grounds into a Nalgene bottle. Worked for me." – Paul Vermillion, Tyler, TX.

"During Operation Desert Storm we usually just had the instant coffee from our MREs, but we did get real coffee once and ended up using our gunner's sock as a filter boiling it in an ammo can on the back of our tank." – Jason Bruce, Cape Girardeau, MO.