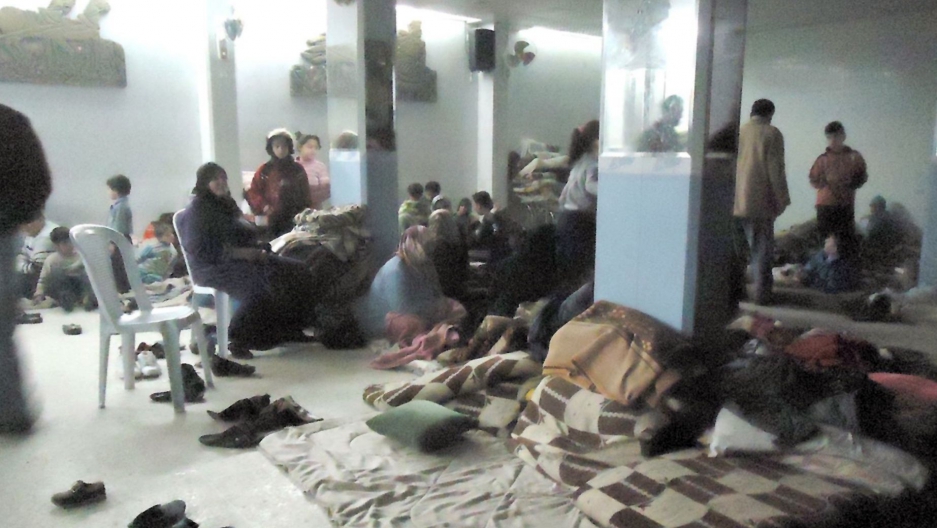 Syrian families hide in a shelter near Baba Amr neighbourhood in the beleaguered city of Homs. The city has been under constant fire from government forces for weeks.
Credit: -/Stringer
Share

Whether Wednesday's attack near Damascus involved chemical weapons remains to be seen. What is certain is that upwards of 800 people are dead near the capital. The images circulating are horrific.

Activists say the attack is one of the worst atrocities in Syria's civil war — a conflict that every day brings new reports of shootings and deaths.

Reports of casualties are hard to verify, since most figures come from government and opposition forces. But here's a look at battles that stand out against the already bloody backdrop, with the most recent listed first:

May 2013: The massacres of Baniyas and al-Bayda

These two widely reported massacres occurred in the Sunni village of Bayda and in the Sunni portion of the city of Baniyas. Troops loyal to Syrian President Bashar al-Assad, supported by paramilitaries, are believed to have killed at least 100 people. Some put that number closer to 400.

This photo from a clash with riot police in Baniyas on May 27, 2011. (AFP/Getty Images)

The Battle of al-Qusayr included two main battles, one in April and the second in May. The Syrian Army and the Lebanese militia Hezbollah launched the offensive, aiming to capture the villages around the rebel-held town of al-Qusayr. They ultimately launched an attack on the town itself. According to opposition sources, as many as 500 rebels were killed. The Syrian government says 1,257 rebels were killed.

An image grab taken from a video uploaded on Youtube by Al-Qusayr Media Centre on May 26, 2013. (AFP/Getty Images)

April 2013: The Battle of Jdaidet al-Fadl

The Syrian Army took control of Jdaidet al-Fadl and Artouz in the Damascus countryside in April. Opposition sources accused the Syrian Army of massacring up to 500 people (including fighters). The Syrian Army, for its part, accused rebels of killing supporters of the government.

Homs, which links Syria's north, south and Mediterranean coast, has been one of the worst-hit regions. In January 2013, the Syrian Observatory for Human Rights, a UK-based monitoring group, said that pro-Assad forces killed 106 people in the city. BBC News also visited the scene and said it found evidence that at least 100 people were killed and burned in their homes. In May 2012, Homs province was the scene of the killing of 108 people, including nine children and 34 women, in the town of Houla, which UN monitors blamed on the army and pro-Assad militia.

A mother holds the body of her 5-year-old son during his funeral after he was killed by a sniper outside the city of Homs. (AFP/Getty Images)

The Syrian Army defeated the rebel forces and took control of Daraya, a suburb of Damascus, in August 2012. An estimated 500 people were found dead, with rebels and the government accusing each other of being responsible for the massacre.

The Battle of Aleppo began in July 2012 and continues today. The battle's scale and importance led combatants to name it the "mother of all battles". >Warning this is graphic video:

The Battle of Idlib, located in the north of Syria, started on March 10, 2012, and is ongoing. After three days of fighting in March 2012, the army recaptured the city from rebels. Dozens died. Fighting spiked in Idlib again in January 2013.

Human rights and opposition activists say some 200 people were killed by Syrian security forces in the hills and villages of the northwestern province of Idlib on December 19 and 20, 2011. Most of those killed in the Jabal al-Zawiya area were reportedly army defectors.

Aber al-Ghareed, 11, lays in bed recovering after a projectile exploded in front of her house in Idlib province. (D. Leal Olivas/Getty Images)

The Syrian government announced that 120 security personnel had been killed in the northwestern town of Jisr al-Shughour.

April 2011: Attacks on Deraa and Damascus

The Syrian uprising was only a month old in April 2011, when 72 protesters were killed by security forces firing on crowds. Many of the dead were in the southern village of Ezra, near Deraa and in a suburb of Damascus.