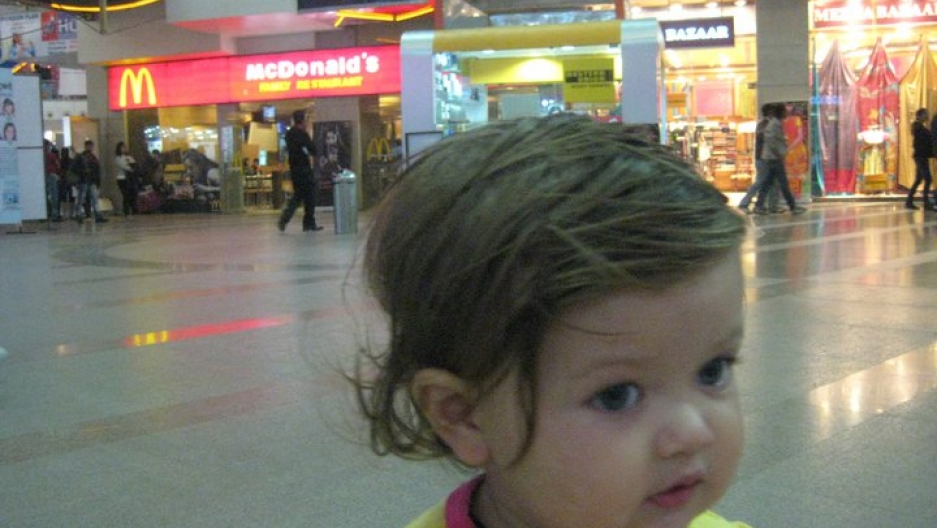 My Virginia-born daughter got tired of Indian food at her grandparents' home in Lucknow, and asked for a burger. So I took her to McDonald's in an American-style mall.

As we sat there nibbling on our Maharaja Mac, a bony, shirtless boy, who looked to be about 6, pressed his face against the window. He was looking longingly at our food. I kept eating, but my daughter locked eyes with him.

The kid started making gestures that he was hungry. She asked me, "What is he saying, Papa?"

I told her the boy wanted food. Since my daughter is almost 4-years-old, I prepared to answer the cascade of questions that was sure to follow.

She asked, "Why doesn't he have any money?"

I tried to come up with an answer. Having grown up in India, I'm sometimes oblivious to the poverty around me, but my daughter always points out the differences between America and India.

On the way out, I handed the hungry boy a 10-rupee note. Even though it's worth less than 20 cents that would be enough for him to buy a cheap meal, though not at McDonald's.

As we went back to my parents house, my daughter asked me more questions about why I gave him the money and why he didn't have his own.

The concerned look on her face made me sad. But it got me thinking about a program the Indian government just launched to subsidize food for hundreds of millions of poor people–well over half of India's population. That could do a lot more than my 10-rupee note. But then I thought about how some in the US government want to make it harder for poor Americans to get food stamps.

I didn't share this with my daughter. I thought it would be too much for her to understand.