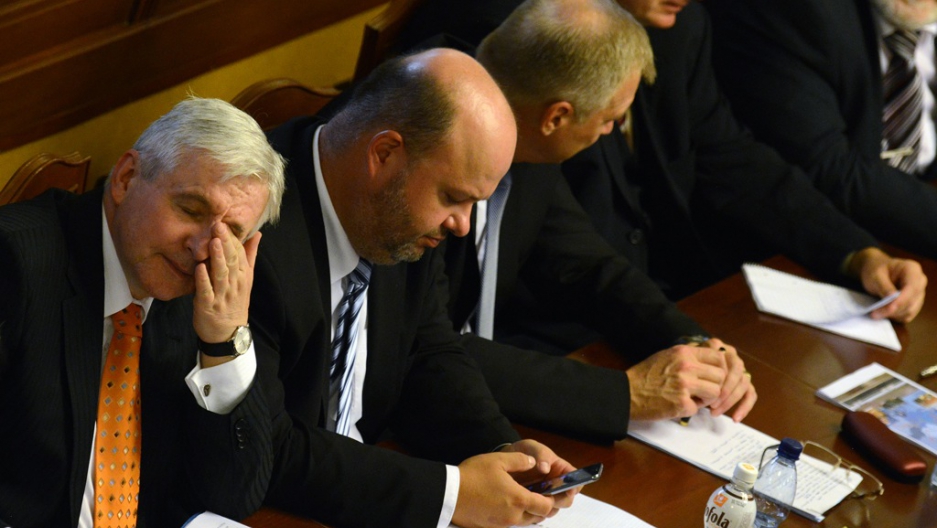 Czech Prime minister Jiri Rusnok (L) with members of his technocrat cabinet at a session in the Czech Parliament on August 7, 2013, ahead of a confidence vote on the new technocrat government.
Credit: MICHAL CIZEK
Share

Czech MPs voted to dissolve parliament on Tuesday, triggering early elections that could put an end to months of political turmoil.

The Czech Republic has been in political crisis ever since former Prime Minister Petr Necas stepped down two months ago due to a bribery scandal involving his top aide and lover.

The proposal to dissolve parliament was tabled by three of the country's major parties — the far-left Communists, the center-left Social Democrats and the right-wing TOP 09 — and needed at least 120 votes in the 200-seat parliament to pass. A total of 140 MPs backed the decision.

A technocratic government formed by President Milos Zeman in July resigned last week, and new elections are expected in October. They were previously scheduled for May 2014.

Opinion polls have shown that the center-left Social Democrats are likely to be the most popular party, but that they will need support from others in order to govern. The party's leader said he plans to talk to the Communist party about becoming partners.

Social Democrat chairman Bohuslav Sobotka, who is likely to become the next Czech prime minister, called the outcome "a clear decision that everyone should respect."

"We are giving citizens room to decide about the future of the Czech Republic."