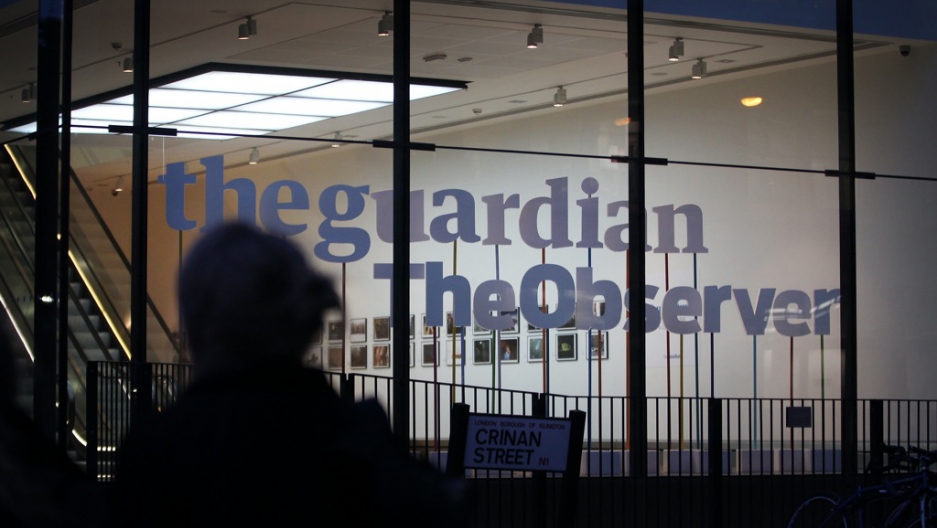 The Guardian and Observer newspaper office, situated near King's Cross in London, England. The Guardian's editor-in-chief says that the UK spy agency sent its officials to force the paper to destroy its records relating to NSA whistleblower Edward Snowden.
Credit: Peter Macdiarmid
Share

LONDON — How far would the UK government go to stem the National Security Agency leaks?

Far enough to detain a journalist’s partner under counterterrorism laws and order a leading news organization to destroy its own hard drives, according to the editor of the Guardian newspaper, who on Monday revealed the lengths the government has gone to halt the paper’s investigations into confidential files leaked by former intelligence analyst Edward Snowden.

“You’ve had your fun. Now we want the stuff back,” Guardian editor Alan Rusbridger said he was told in a “phone call from the centre of government” last month.

In a series of increasingly ominous meetings, the paper was handed a blunt ultimatum from the government: Hand over the documents or destroy them.

Given that other copies of the documents were stored abroad, the paper chose the latter. In what reads like a scene from a noir film — or ‘Zoolander’ — Rusbridger describes how officials from Britain’s top spy agency ordered his staff to smash to bits computer hard drives containing digital copies of leaked documents in the Guardian’s basement.

From a technical standpoint, it’s unclear what UK authorities hoped to achieve by having destroyed the devices on which digital copies of the NSA documents were stored.

“I explained to the man from Whitehall about the nature of international collaborations and the way in which, these days, media organisations could take advantage of the most permissive legal environments,” Rusbridger wrote.

“Bluntly, we did not have to do our reporting from London. Already most of the NSA stories were being reported and edited out of New York. And had it occurred to him that [Guardian journalist Glenn] Greenwald lived in Brazil?”

Despite the UK press’s reputation for outspoken iconoclasm, there is no free speech law protecting the press in the UK, as US journalists have in the First Amendment.

“Using the threat of legal action to force a newspaper into destroying material is a direct attack on press freedom in the UK,” said Kirsty Hughes, chief executive of Index on Censorship, in a statement.

Rusbridger’s revelations came shortly after it was revealed that police had subjected Greenwald’s partner, David Miranda, to nine hours of questioning at London’s Heathrow airport on Sunday.

“Coming on the back of the detention of David Miranda, it seems that the UK government is using, and quite likely misusing, laws to intimidate journalists and silence its critics,” Hughes said.

More from GlobalPost: US outsourced spy work to the UK, new documents reveal

David Miranda, 28, traveled to Berlin to exchange documents with Greenwald’s reporting partner Laura Poitras, Greenwald told the New York Times. He was carrying encrypted digital files of documents leaked by Edward Snowden when he was stopped at Heathrow under a UK anti-terror law.

UK authorities confiscated Miranda’s computer, mobile phone, hard drives and other electronic equipment during his nine-hour detention. On Tuesday, Miranda announced that he was launching civil legal action against the UK Home Office — Britain’s interior ministry — to get the items back and stop their further examination.

Britain’s independent reviewer of terrorism laws is investigating Miranda’s detention. The Home Office has refused to comment on specifics of the case, saying that it is an ongoing investigation.

“The government and the police have a duty to protect the public and our national security,” it said in a statement. “If the police believe that an individual is in possession of highly sensitive stolen information that would help terrorism, then they should act and the law provides them with a framework to do that.

“Those who oppose this sort of action need to think about what they are condoning,” the Home Office said.

While a source at 10 Downing Street told Agence France-Presse there was no political involvement in Miranda's detention, the Guardian's Washington bureau chief said:

Brit govt confirms Cameron approved effort to get Snowden docs from Guardian, claiming terrorists could have hacked into its IT system.