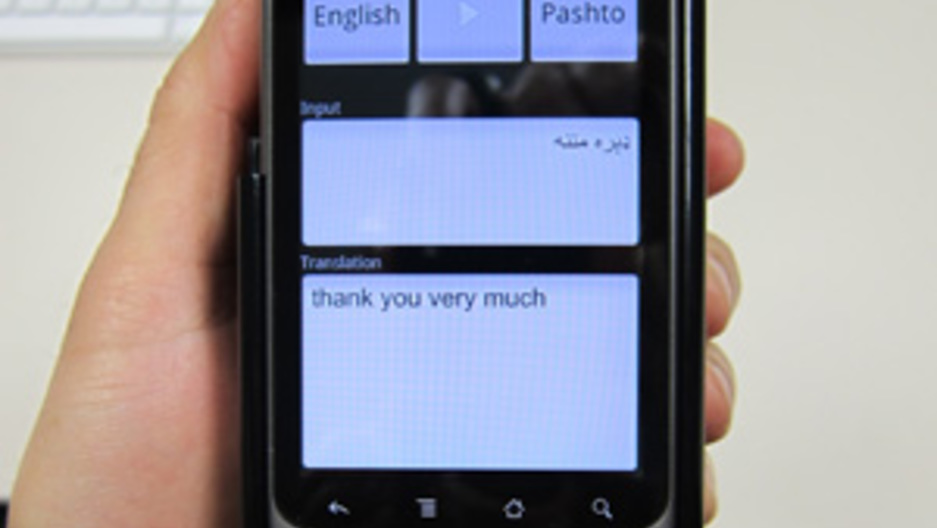 The demand for translating online data into multiple languages is growing fast. Computer-based translations help, but they're still far from perfect.

Two Silicon Valley teams are making progress on machine translation, but they're learning that replacing multilingual humans is easier said, than done.

At the Google headquarters in Silicon Valley, a team works on translation software. Senior Communications Associate Roya Soleimani demonstrates how it works.

With a single click, she can access web pages in over 70 languages, and get instant translations on her smartphone of text, speech, and even photos she's taken of menus and street signs.

"You can have access to the world's languages right in your pocket," she says. "The goal is to become that ultimate Star Trek computer."

She explains how instant webpage translation is becoming a crucial tool for online users to reach multicultural communities and global markets.

Josh Estelle leads the Google translate team for mobile. He says its mission is to organize the world's information to make it universally accessible and useful.

So, how does Google do it?

"Right, so it's not bilingual elves, as much as people might think," says Estelle. "Our system is built off example data. We use what's called 'statistical machine translation.'"

Remarkably, there's not one linguist on Google's core team: they're all engineers or statisticians, using computers to analyze billions of translations every day. But there are countless examples of translation bloopers by Google and other competing services.

So why is it so hard? Google's Roya Soleimani explains that it is a very deep computer science problem.

"There are so many idioms, nuances within language," she says.

Not to mention dialects, accents and ambiguities. Spanish words like "gordito," which means "chubby," can have several shades of meaning, from insults to terms of endearment. Google's translation team tackles such snags.

"We can use those mathematical algorithms to process all this data and make sure we pull out the nuggets of truth, the good pieces of translation," says Estelle.

So Google translations are only as good as the translated data it finds online.

Researchers at Silicon Valley's SRI International–which invented Apple's SIRI–have a different approach. Kristin Precoda leads SRI's translation team and shows a smartphone app they've developed for the US military. It can translate live between people speaking in English and Pashto, a main language in Afghanistan.

Precoda says they're working on getting computers to learn from mistakes and ask for clarification. So what's the Holy Grail of translation? For Precoda, it's sticking to the sentiment of the Hippocratic oath.

"First do no harm," she says. "In military situations, medical situations, a poor translation can really do a lot of damage."

"Human translation and machine translation are kind of like 'frenemies,'" says translation expert Nataly Kelly. "They live alongside each other, but not without a lot of tension."

Sometimes, machine translations are so atrocious, human translators prefer to start from scratch.

And it's that need for accuracy that keeps the human translation business growing–it's about a $34 billion market. That dwarfs machine translation's $200 million.

Meanwhile, the market for all translation is still growing fast.

"Demand for translation is booming because content creation is exploding," says Kelly. "And since much of that content is created, and demanded, in multiple languages, human translators alone can't keep up. They need machine translations to improve–and fast."

For now, the experts have this advice for using online translations: Trust, but verify.