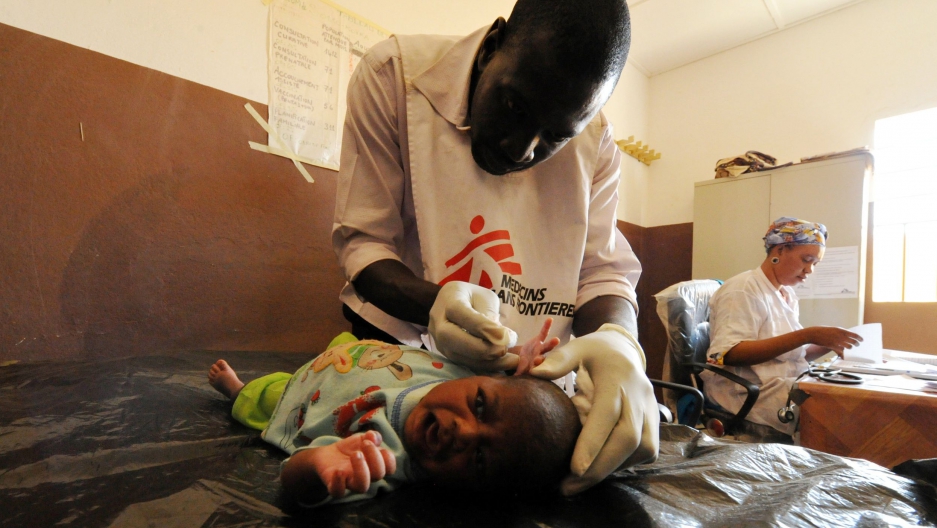 A worker from the NGO Doctors Without Borders examines a sick baby in Gao, in the north of Mali, on February 4, 2013.
Credit: Sia Kambou
Share

“What can you tell me about diarrhea in your country?”

It should have been a simple question for an official at Mali’s Ministry of Health, but when researchers backed by the Bill & Melinda Gates Foundation first asked it of Dr. Samba Sow a few years ago, his immediate thought, he said, was, “Not much.”

International organizations like UNICEF and the World Health Organization estimate diarrhea is the second most common cause of death for children under 5 in Mali. But, on a local level, the only hard data Sow had to work with at the time was an annual report of the number of children who checked into hospitals showing symptoms of diarrhea.

“If I was just looking at the numbers and considering nothing else, I didn’t know enough to say for sure that we even had a problem,” he said by phone.

The Ministry of Health agreed to make Mali one of seven sites in the Global Enterics Multi-center Study (GEMS), the largest and most in-depth research project examining diarrheal disease in the developing world to date. Sow used the resulting statistics to secure funding for a vaccine against diarrheal disease — among other things. But the findings, recently published in The Lancet, aren’t just helpful to Mali. They’re illuminating for the global health community as a whole.

Diarrhea is a tough problem to solve because it is caused by more than 40 different viruses, bacteria and parasites. GEMS found, though, that just four pathogens are responsible for the majority of moderate-to-severe diarrhea cases. The virus that topped the list — rotavirus — has long been regarded as a formidable foe. But the second most common contributor to diarrheal disease was a parasite called cryptosporidium, which has, up to this point, been considered more of a nuisance than a lethal threat to all but the severely immune compromised. While there is a vaccine for rotavirus, a weapon against cryptosporidium isn’t even in the pipeline.

“Cryptosporidium hasn’t received a lot of attention,” said Thomas Brewer, who heads up efforts to eradicate diarrheal disease at the Bill & Melinda Gates Foundation.“We thought it was kind of an oddball that might affect certain types of populations. It turns out it’s pretty common — and pretty deadly.”

In Mali, doctors often don’t have the resources to properly diagnose the cause of the diarrhea, Sow said. The only lab Mali has that’s capable of analyzing which pathogen is responsible for a child’s diarrhea was installed as part of the GEMS project.

Rotavirus presents as loose stools, vomiting, anorexia and fever. Cryptosporidium has the same symptoms. Because rotavirus is the most common cause of diarrhea, treatment for rotavirus is the go-to plan in clinics, he said.

Rotavirus kills children through dehydration and — as long as a child gets help in a timely manner — is relatively simple to treat, said Myron M. Levine, a professor at the Center for Vaccine Development at the University of Maryland and principal investigator on the GEMS project. Doctors administer oral rehydration therapy to replace fluids and lost minerals. For a particularly bad case, a child may be rehydrated intravenously.

“If the child has rotavirus and they make it to the health center in time, we have a very good chance of saving them,” Levine said.

But if the child has cryptosporidium, the chances aren’t as good.

Children infected with cryptosporidium, Levine said, don’t die from dehydration. Instead, the parasite attaches to the child’s insides like glue, damaging the intestines. Children appeared to get better, but their intestines ware so pathologically changed that they experience adverse nutritional consequences for days, weeks and months after the initial illness.

When researchers followed up two months later, children who had suffered — and recovered from — a moderate to severe bout of diarrhea were almost nine times more likely to have died than children who had not, he said. Those who survived weren’t growing as quickly as their peers.

“The probability of that being unrelated is minuscule,” Levine said. “There is obviously a clear, strong relationship.”

Because children with cryptosporidium don’t die until weeks or months after their diarrhea is gone, Levine said the parasite’s deadly nature has been largely overlooked.

The research is so sparse that the World Health Organization’s Initiative for Vaccine Research, while it tracks progress toward a vaccine for all three of the other top killers, doesn’t mention cryptosporidium.  There is only one approved drug to treat it and it does not work well on infants, who represent the lion’s share of diarrhea deaths. That drug, called Alinia, was approved more than a decade ago.

“We’re pretty naked in terms of tools to fight this,” Levine said. “We have one lousy drug.”

Research into solutions for rotavirus and the other two most common pathogens, shigella and enterotoxigenic E. coli, are much further along.

Since 2006, the GAVI Alliance, a US-supported nonprofit that aims to increase global vaccination, has introduced the rotavirus vaccine into 14 of the world’s poorest countries. GlycoVaxyn AG secured a grant last month to conduct human trials on a promising vaccine to protect against shigella. Vaccines for enterotoxigenic E. coli are also in the pipeline.

Still, there are hurdles to overcome.

Many diarrhea deaths occur, not because of a lack of science, but because children don’t have access to existing medical solutions. More than half of the children who died during the GEMS study died at home.

So few people bring their children to health clinics that, when Levine and Sow started the project in Mali, they struggled to find cases to analyze until they reached out into the community. Diarrhea is accepted as a normal part of childhood.

“Mothers say, ‘Oh, no. It is fine. His teeth are coming in,’” Sow said. It’s common to “treat” the problem by depriving children of water, which makes the child sicker.

“You only take the child to the doctor if he’s almost in a coma,” he said. Even then, the first line of defense is to consult a traditional healer. The hospital is a last resort.

Changing that culture could be as tough a battle as finding a medical solution.

“We are just getting started,” Sow said. “I would say before GEMS we were seeing the eyes and the nose of the hippopotamus. Now, the head is sticking out of the water, but there is still the rest of the body.”