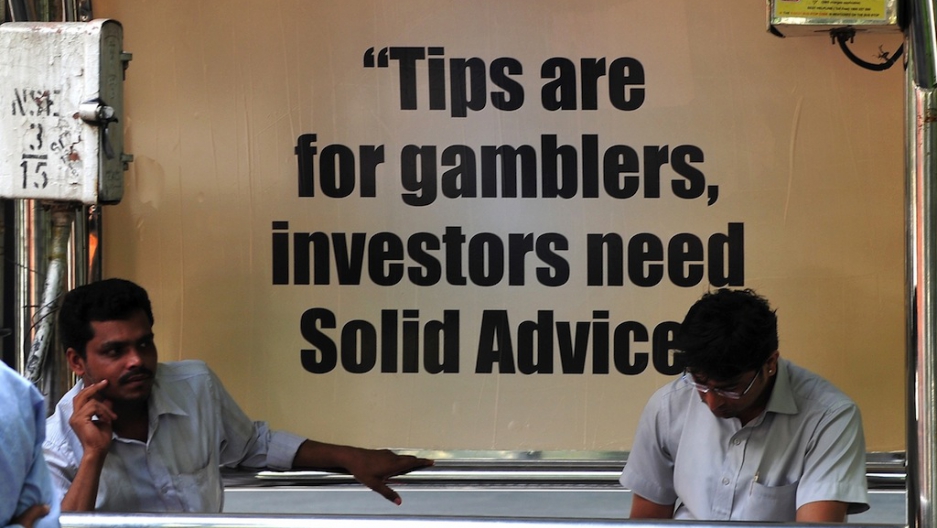 Commuters sit next to a brokerage firm advertisement in Mumbai. India's rupee and stock exchanges have been plunging in recent days, as foreign investors pull money from an economy beset by bureaucracy and a current account deficit.
Credit: Indranil Mukherjee
Share

NEW DELHI, India — As recently as 2010, when the economy was growing at 9 percent, India was slated to be the next China.

Now, growth has dipped below 5 percent, and Indian policy makers are fiddling as the rupee burns and foreign investors flee.

Stock indexes are plummeting while bond yields skyrocket, dramatically increasing the cost of the credit needed to grow the economy.

Worst of all, virtually nobody has much faith in India's ability to bring down its current account deficit — the excess of money it’s sending out (to pay for oil, for example) versus taking in (from export earnings). When the country faced this problem in 1991, the government was forced to fly 67 tons of gold to Europe as collateral for an emergency loan from the International Monetary Fund.

On Tuesday, the rupee fell to a new record low of 64.12 against the dollar before the central bank intervened. That's a drop of nearly 14 percent since January. Yields on government bonds hovered near Monday's five-year high of 9.26 percent, while the Bombay Stock Exchange's benchmark Sensex closed at 18246 and the National Stock Exchange's Nifty closed at 5,401. That's a 10 percent fall in the Sensex since July, and a 12 percent drop for the Nifty since May.

So is India totally screwed?

GlobalPost's Jason Overdorf spoke separately with Franklin Templeton's Mark Mobius and Crisil's Dharmakirti Joshi to find out. The interviews were compiled, condensed and edited by GlobalPost.

Mobius: There's a possibility of a downgrade [of India's sovereign debt], which would not be very good. It's getting pretty urgent, but the surprising thing is the government doesn't seem to be acting with any degree of urgency.

Joshi: [Because of the soaring government deficit, the rising interest rate and plummeting rupee, the government doesn’t] have any policy instrument to fire growth. You don't have interest rate leverage, nor do you have fiscal leverage. On the external front, you have very high current account deficit and your ability to attract capital has diminished. In this scenario, what happens to global liquidity and global risk appetite matters a lot.

India's exports are notoriously low, making it hard for the country to benefit from a falling exchange rate. Are there any bright spots?

Mobius: There are some companies that are benefiting from the cheaper rupees. Outsourcing firms are in pretty good shape in that regard. There are winners. It's not all losers. But for the country in general, the prognosis is not good.

Critics have blasted the government for tinkering with import duties on gold and TVs. What's a step that could have more impact?

Mobius: One of the issues they have is the inability to get money into the country because of the various restrictions they have. We've had this experience with clients who have hundreds of millions of dollars they want to put into India, [and the government turns them down]. They can't overcome the incredible bureaucracy and restrictions they have. This is putting the whole country in jeopardy in the capital markets around the world.

Joshi: You need a burst of reforms. You have to look at the most binding constraints to the economy. One is decision making. Even in these poor conditions there are some projects that are stalled because clearances are not coming ahead.

Second... is sorting out the mining problem. A lot of iron ore is below the ground but the factors above the ground are not favorable. As a result you are importing iron ore and worsening the current account deficit.

The third is the very tight liquidity. You need to wind that down.

If India isn't able to arrest the fall of the rupee and the flight of foreign capital, could it be facing a situation similar to the Asian financial crisis of 1997 or its own balance of payments crisis of 1991?

Mobius: I think it's quite different. You don't have the kind of debts in India that you had during the Asian financial crisis. The balance of payments problem may be similar, but it's a different scenario. It's a matter of losing an opportunity, rather than being hit by incredible debt that you can't pay. In that sense, it's less serious, provided that they're able to avoid this downgrading.

Joshi: The very fact that you're comparing it with 1991 means that things are not looking good at all. Today the sovereign debt is not at risk, but the corporate sector is more at risk. Corporations have gone out and borrowed, but the government has refrained. That means more stress on the corporate sector.

What would be the impact of a downgrade of India's sovereign debt rating?

Mobius: The immediate effect would be interest rates going up and the availability of credit going down. In this environment, with money going to the US and away from emerging markets, that would not be very good for the country.

The real question is, how is Delhi going to respond to these new challenges? It's not a matter of getting a new central banker and having him do some manipulations. It's a fundamental reform issue.

Does the prospect of elections in May 2014 hold out hope, or is there a risk that the new government may be even less stable, and thus less able to push for important economic reforms?

Mobius: The hope is that you're going to have a much more viable situation (after the election). Whether that's going to work out is a big question mark. I think the general opinion is we may get a better and more active government.

But whether that's going to be the case is another story. The right strategy now is wait and see. Stay in those companies that are benefiting from the depreciation of the rupee. But other than that wait and see.