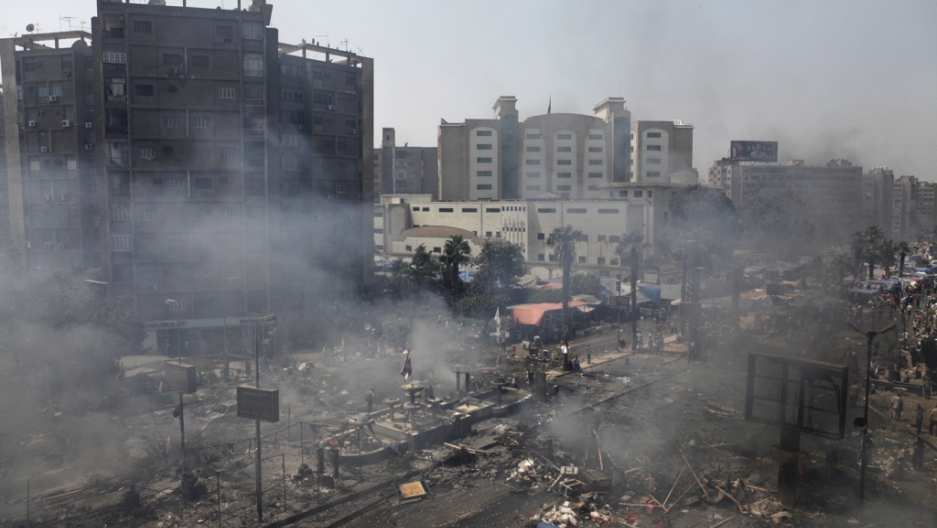 Plumes of smoke rise from the site of a protest in support of deposed Egyptian President Mohammed Morsi during a violent crackdown by Egyptian Security Forces on a pro-Morsi sit-in demonstration at the Rabaa al-Adweya Mosque in the Nasr City district on August 14, 2013 in Cairo, Egypt.
Credit: Ed Giles/Getty Images
Share

NASR CITY, Egypt — It was a combination of the stinging smell of tear gas wafting through my window and the sound of continuous gunfire that woke me up around 6:30 a.m. on Aug. 14, a day that would turn out to be one of the bloodiest in Egypt’s modern history.

Two plumes of both black and white smoke from burning tires and tear gas rose over Rabaa al-Adaweya Square, just meters from my home and where thousands of supporters of deposed president and Islamist leader Mohamed Morsi had been camped out for weeks.

I joined my neighbors on Nasr Road — which runs alongside the square, in the middle class northeast Cairo suburb of Nasr City — to observe the police and army operation to disperse the sit-in. It was something we all knew was coming as the country's political crisis deepened.

To our right, police and army troops had surrounded and were attacking the sit-in. On the left, there was another battle between security forces and pro-Morsi protesters toward Abbas al-Akkad Street.

At the beginning of what would be an hours-long operation, and that would eventually remove protesters from the square, some security forces actually appeared to be in a state of panic.

A group of police officers nervously walked back and forth in front of us as we stood outside our buildings, warning us to stay off the streets. They said by 9 a.m., at least six of their men had been shot with live ammunition.

It’s true that some Morsi supporters were armed and firing on troops from Abbas al-Akkad Street — about a block from Rabaa al-Adaweya — sending bullets careening haphazardly in our direction.

“You do not see what we see!” one officer screamed at us. “We are risking our lives for your safety!”

A few minutes later, the same officer responded to a man on the street who claimed he was a journalist with blows to the head. “Journalists? There are no journalists here!” he yelled.

We watched security forces violently detain men on a whim, capturing and beating anyone they suspected of having been at the sit-in.

Our eyes widened as one bystander with a beard — which some Islamists grow to emulate the Muslim Prophet Muhammad — was repeatedly kicked in the head, punched and dragged across the street to be loaded into a police van. Security forces said they believed he was at the protest.

In one instance, a local shopkeeper took a razor from his store and frantically shaved off his own beard on the street, after police officers singled him out from a group of bystanders.

Others, including a young teenager, were detained for chanting against the interior ministry. One male onlooker yelled at a police officer, "May God forgive you for shedding all of this blood!" He was also bundled up and carted away by security forces.

In addition to threatening and detaining those milling around on the side streets around the sit-in, security forces also appeared to be shooting indiscriminately at protesters both inside the sit-in and in the clashes on Abbas al-Akkad street.

Some five hours into the operation, the bodies of 13 protesters with gunshot wounds to their heads were lined up outside a neighboring building. Apparently they had been clashing with police in an alleyway adjacent to Rabaa Square.

Next to them, police laid out a range of weapons — from guns to Molotov cocktails — they said were confiscated from demonstrators inside the sit-in, prompting hushed whispers of concern from spectators. Whom should they side with? If these dead men were armed, did they deserve sympathy?

Police left the bodies in plain sight until an ambulance retrieved them when the operation was over more than seven hours later.

But as the gunbattle raged around us, many remained trapped inside the sit-in. In recent weeks, it was transformed into a mini-city of several thousand people. We saw dozens of distressed people who came to rescue family members still inside.

"My two daughters want to leave the sit-in, but they are worried they will be shot,” one man said. Another, attempting to get inside to reach his sister, broke down in tears after failing to breach the sit-in due to the heavy gunfire.

We saw some police officers personally escort women, children and the elderly through so-called “safe exits” for those unarmed protesters that wanted to leave the demonstration. But the same cannot be said for the men, who were rounded up upon leaving the square.

In the chaos, nobody knew which avenues were safe.

But as the casualties mounted, I also saw empathy and resilience.

With the protest under siege, and until ambulances arrived, four teenage boys dodged bullets as they transported the injured from the sit-in to nearby hospitals and mosques on a trolley.

Despite their shock at the violence, shopkeepers distributed food and water to police officers.

Once the violence stopped, residents helped remove the bodies of those killed inside the demonstration, but that were left as security forces stormed the square.
Hundreds would be killed that day and thousands other injured. But for me, what I saw will never be summed up in simple numbers.

No matter high how the death toll, it would fail to capture what I saw: stories of struggle, dehumanization but also compassion playing out on the streets of Cairo.