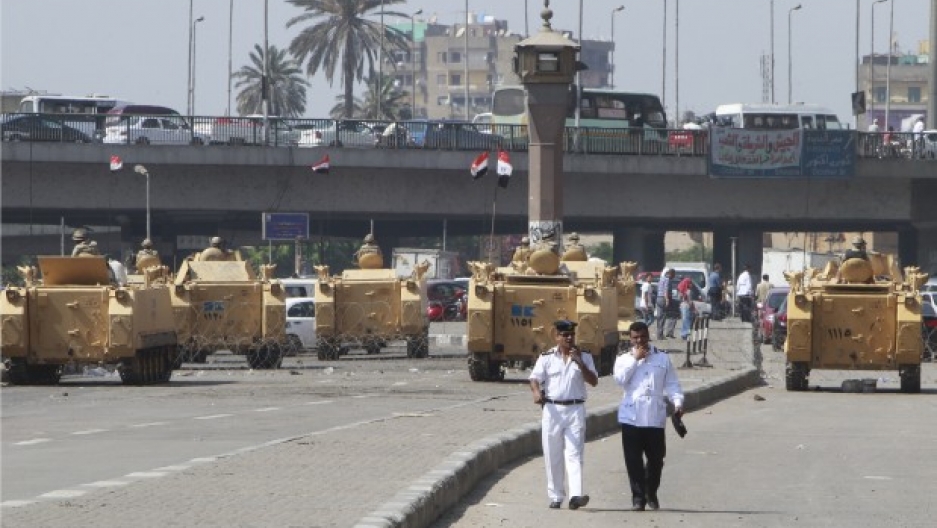 Share
As the political turmoil in Egypt continues play out, one thing has been clear for some time. The Egyptian economy is in deep trouble. A gruesome anti-Muslim Brotherhood video making the rounds online shows images of bloody street battles, horrific injuries and shocking acts of violence–including young people being thrown off a roof. Such images have become the public face of Egypt around the world. They are hardly the kind of thing that would inspire people to go and book an Egyptian vacation. And that is enormously bad news for a vital sector of Egypt's economy. "Businesses are closing up, tour guides are sitting at home. The tourism sites [and] the pyramids are empty," explained Ahmed Elemam in a phone interview. The 31 year-old CEO of Tour Egypt said the family business got off to a fantastic start in 2010, and it even managed to regain some lost ground after the 2011 revolution. "But protests are one thing," Elemam said. "Violence is something else." The events of recent weeks have essentially killed off the company's business. Tourists are canceling all of their Egypt travel plans, he said. "We have laid off most of our employees," he said. "I am headed to a complete shutdown and there's not much we can change. I would actually advise tourists to wait until things get more stable." No time is good for a collapse in business, obviously. But Elemam said this particular moment is especially worrisome. Elemam described the domino effect that could send a painful economic shock wave across Egypt. It would start with the tour companies and spread to the hotels, resorts, Nile river boats, bus lines, gift shops and so on. Egypt's tourism sector has long been a vital source of revenue and it is certainly being hit hard. On top of that, the country's foreign currency reserves have been depleted. And the government is under pressure from the west to implement reforms or face the prospect of losing economic aid. So, can Egypt muddle through? "Yes, Egypt will probably muddle through," said Mirette Mabrouk of the Rafik Hariri Center for the Middle East at the Atlantic Council. "It's just that it is going to be a long and difficult and fairly unpleasant slog." Mabrouk said the loss of tourism revenue will hurt the Egyptian economy badly. But there are two other sources of foreign currency that have remained steady. Despite two and a half years of political turmoil, ships continue to pass through the Suez Canal–for a fee. And the flow of remittances–that's money from Egyptians living outside the country–has continued as well. "Those have been stable and in fact, during various times of the revolution have gone up," Mabrouk pointed out. That is thanks to feelings of Egyptian pride and patriotism, she said. Persian Gulf states, including Saudi Arabia, have given billions of dollars to Egypt already and they are pledging to make up the difference if donor states such as the US cut off economic aid. But the big picture remains dire. Egypt is a net food importer. That means it cannot feed its own people without foreign help. Many foreign investors have fled Egypt since the start of the revolution. And those tourists are not likely to start returning for trips to the pyramids, Nile River or Luxor until things start to calm down in the streets.