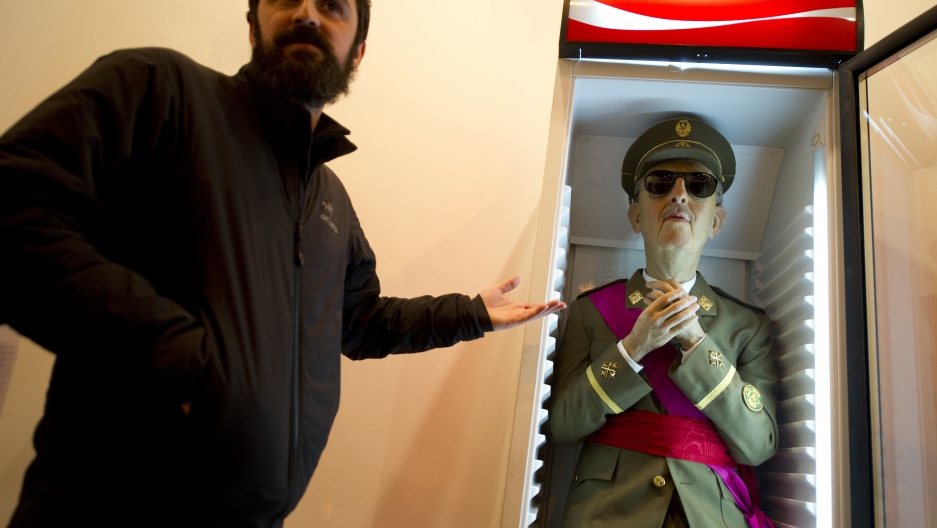 MADRID, Spain — The face is slightly obscured behind a pair of dark sunglasses, but it’s all too familiar to millions here. So, too, are the officer’s peaked cap and military uniform.

It is, without a doubt, Francisco Franco, the right-wing dictator who ruled Spain for nearly four decades. But you’ve never seen him like this before: fashioned out of silicon, crouching comically inside a Coca-Cola refrigerator.

Eugenio Merino, the 37-year-old artist who created the sculpture, says his aim was to represent Franco’s presence among Spaniards. “I put him inside a fridge because I thought he’s still fresh, still present in our society,” he says in his studio in downtown Madrid.

The work, which Merino called “Always Franco,” has generated no small amount of controversy and helped show just how much the dictator remains an issue here nearly 40 years after his death.

The dispute over the sculpture began last year, when it was put on display in a major Madrid art show. The Francisco Franco Foundation, which seeks to glorify the late dictator’s memory, took legal action against the artist, arguing he had insulted the honor of a former head of state.

A judge shelved the case last month, ruling that the artwork was a legitimate form of expression and not a political statement. Fellow artists organized a series of events ahead of the decision to express support for Merino and contempt for Franco.

Merino says the ruling wasn’t about Franco. “It doesn’t matter whether you like a work of art or not — that’s one thing,” he says. “But freedom of expression is quite another matter.”

Pointing to other works in his studio, he says no public figures — least of all dictators — should be protected from the artist’s brush.

A small sculpture of Cuba’s Fidel Castro as a zombie stands on a shelf. While he’s talking, workmen cart away a crate containing “Always Mao” — a depiction of the Chinese communist chairman in a refrigerator.

Across town, the atmosphere inside the Francisco Franco Foundation’s offices couldn’t be more different from the Merino’s studio’s irreverence.

On entering its discreet building, visitors are greeted by an array of Franco-related memorabilia: wall tiles, cellphone holsters, T-shirts and coffee cups all emblazoned with the Francoist eagle, the symbol beloved of Spain’s far right.

Books about the dictator and the 1936-39 civil war he won after defeating a legitimately elected Socialist government surround the foundation’s vice-president Jaime Alonso.

“I understand art as something creative, something beautiful,” he says of Merino’s sculpture. “But all this is trying to do is denigrate the past. These [artists] need a psychiatrist, they don’t need to express themselves. They need to be treated for an illness that is called hate or resentment.”

The foundation, which is headed by Franco’s daughter, is appealing against the judge’s dismissal of the case and expects a response in September.

Alonso disputes the claims of mainstream historians that pro-Franco forces killed upward of 150,000 civilians during and after the civil war (leftist Republican forces are blamed for around 50,000 deaths). He praises the dictatorship as a period of progress and prosperity.

More than an unusual case pitting subversive art against far-right politics, the standoff over the sculpture is highlighting the difficulty Spaniards have had in resolving the legacy of Franco and the civil war.

After Spain embraced democracy in the late 1970s, no reprisals or truth commissions followed, as in post-war Germany and South Africa after apartheid. The newly legalized political left and the post-Franco right worked together to draw up a new constitution and modernize the country. Leaving the past behind was a crucial part of that process.

“There was a very clear pact of not using the past as a political weapon, not asking for responsibilities for crimes committed during the civil war or Francoism,” says historian Jose Alvarez Junco.

Three decades later, in 2007, Alvarez Junco advised the Socialist government then in power on the creation of a historical memory law that sought to revisit the violent past for the first time in order to provide closure for its victims.

It included gestures such as “moral reparation” for victims and the removal of symbols of the dictatorship, such as statues of Franco and street signs bearing his name.

However, Alvarez Junco believes the law was heavily watered down to avoid angering a substantial minority of Spaniards who looked back on the Franco era with nostalgia, or those who simply thought the legislation risked needlessly stirring up the past.

Nevertheless, critics such as congressman Eduardo Zaplana of the conservative Popular Party (PP), described the law as “divisive and conflictive” and likely to re-open old wounds.

Despite the legislation, reminders of Franco remain. In Madrid, a street is still named after the Blue Division, the Spanish troops who fought under Hitler during World War II.

The PP has successfully resisted name changes in many other towns.

Attempts by a well-known activist judge, Baltasar Garzon, to investigate the Franco era’s human-rights crimes proved unsuccessful. He was suspended from practicing law in 2010 after being found guilty of abusing his position trying to do so.

Three-quarters of a century after the civil war ended and nearly four decades after the dictator’s death, rectifying Spain’s historical memory remains a low priority for the judiciary and politicians, especially as the economic crisis continues to bite.

For artists such as Merino, however, it’s impossible to avoid.

“However much we might want to look to the future, we can’t,” he says, “because we haven’t properly closed the door on the past.”