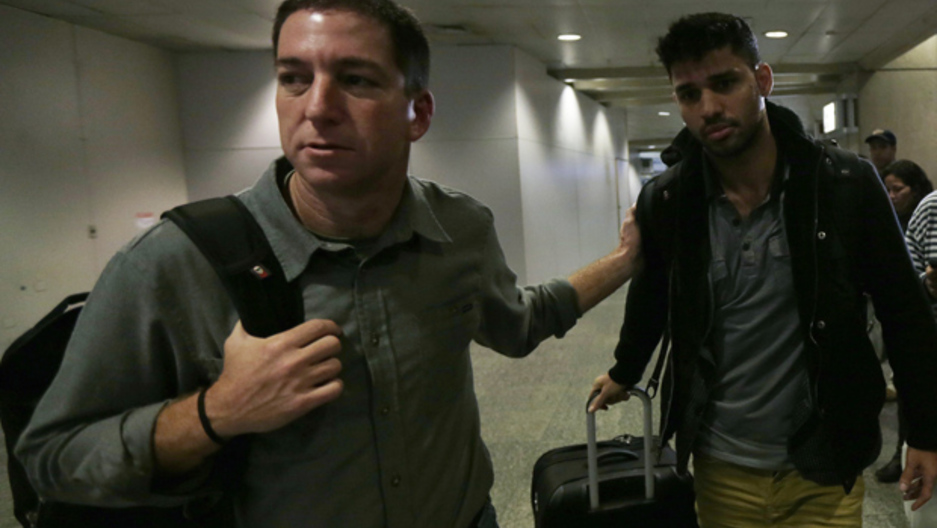 U.S. journalist Glenn Greenwald (L) walks with his partner David Miranda in Rio de Janeiro's International Airport August 19, 2013. British authorities used anti-terrorism powers on Sunday to detain Miranda, the partner of Greenwald, who has close links to Edward Snowden, the former U.S. spy agency contractor who has been granted asylum by Russia, as he passed through London's Heathrow airport. The 28-year-old Miranda, a Brazilian citizen and partner of Greenwald who writes for Britain's Guardian newspaper, was questioned for nine hours before being released without charge, a report on the Guardian website said. REUTERS/Ricardo Moraes (BRAZIL - Tags: POLITICS CRIME LAW TPX IMAGES OF THE DAY MEDIA) - RTX12QL6

Share
This past weekend, British authorities held the partner of journalist Glenn Greenwald for nearly nine hours at London's Heathrow Airport. Greenwald is the Guardian journalist who broke the story on Edward Snowden's NSA leaks. His Brazilian partner David Miranda was detained and questioned under a UK terrorism law. Although Miranda was released and allowed to continue on to Brazil, British authorities seized his electronic equipment. Wikileaks founder Julian Assange calls Miranda's temporary detention a "disgrace." Anchor Marco Werman talks to David Anderson QC, a British official reviewer of terrorism legalization. He's the lawyer tasked with ensuring that the balance between security and civil rights is maintained. And after Miranda's detainment, he's seeking to clarify the law.