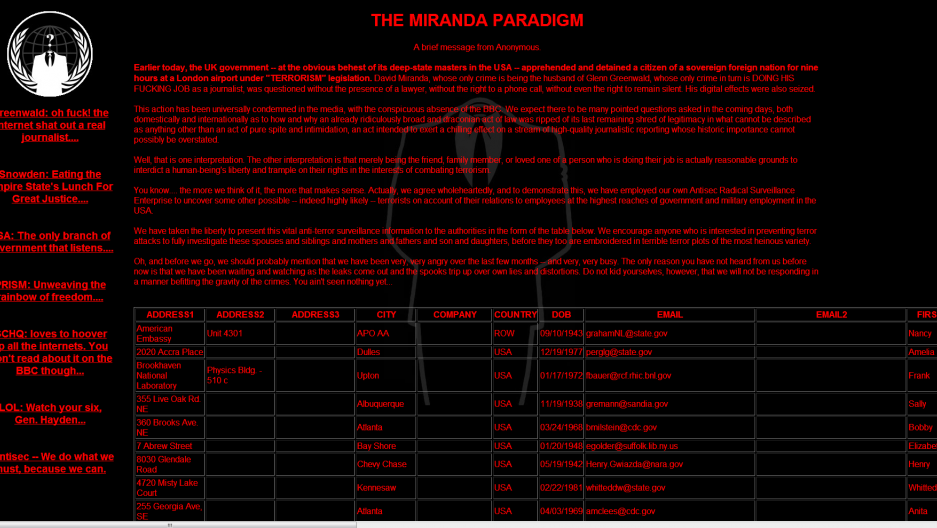 A screengrab of the message posted by Anonymous to hacked websites www.molevalley.gov.uk and www.ptzfcg.gov.cn/CFIDE/zomg_everyone_is_a_terrorist.html
Credit: Screengrab
Share

Miranda was held by British authorities under a counterterrorism law after visiting documentary filmmaker Laura Poitras in Berlin. Poitras and Greenwald are both involved with publishing classified information leaked by former NSA contractor Edward Snowden.

The hackers gained access to molevalley.gov.uk, a site used by the local government district in Surrey, a county in southeastern England.

In an effort to satirize Miranda's detention under counterterrorism law, the Anons described the "d0x," or leaked personal information, of US military and diplomatic personnel they then posted as containing “vital, anti-terror surveillance information.” Declaring their outrage over the targeting of Greenwald’s loved ones, the hackers also posted what appears to be personal information belonging to the officials’ family members.

After several hours, the hacked molevalley.gov.uk domain was taken down, presumably by the system’s administrators. The d0x was then reposted to ptzfcg.gov.cn, the top-level domain for mainland China. The .cn domain is managed through a branch of the Chinese Ministry of Information Industry.

“…site down, now rehosted at http://www.ptzfcg.gov.cn/CFIDE/zomg_everyone_is_a_terrorist.html because the chinese govt are [sic] more cool on sharing things from their sites.”

The @OpLastResort account had remained dormant for several months before the publishing of classified information leaked by Edward Snowden. OpLastResort is responsible for a number of high-profile hacks against the US government, the Federal Reserve and financial institutions that took place earlier this year.

“We expect there to be many pointed questions asked in the coming days, both domestically and internationally as to how and why an already ridiculously broad and draconian act of law was ripped of its last remaining shred of legitimacy in what cannot be described as anything other than an act of pure spite and intimidation, an act intended to exert a chilling effect on a stream of high-quality journalistic reporting whose historic importance cannot possibly be overstated,” read a message posted to the molvevalley.gov.uk domain by OpLastResort Anons.

“We encourage anyone who is interested in preventing terror attacks to fully investigate these spouses and siblings and mothers and fathers and son and daughters, before they too are embroidered [sic] in terrible terror plots of the most heinous variety,” read the message.

The personal information includes addresses, dates of birth and email addresses hosted at various US government domains including state.gov and army.mil. The information also includes work and personal phone numbers and ZIP codes of spouses, siblings and children.

Before Miranda was released on Monday, UK authorities seized a number of his personal effects, including his laptop, cellphone, various video game consoles, DVDs and portable USB drives.

“This was obviously designed to send a message of intimidation to those of us working journalistically on reporting on the NSA and its British counterpart, the GCHQ,” wrote Greenwald following Miranda’s detention.

“But the last thing it will do is intimidate or deter us in any way from doing our job as journalists. Quite the contrary: it will only embolden us more to continue to report aggressively."