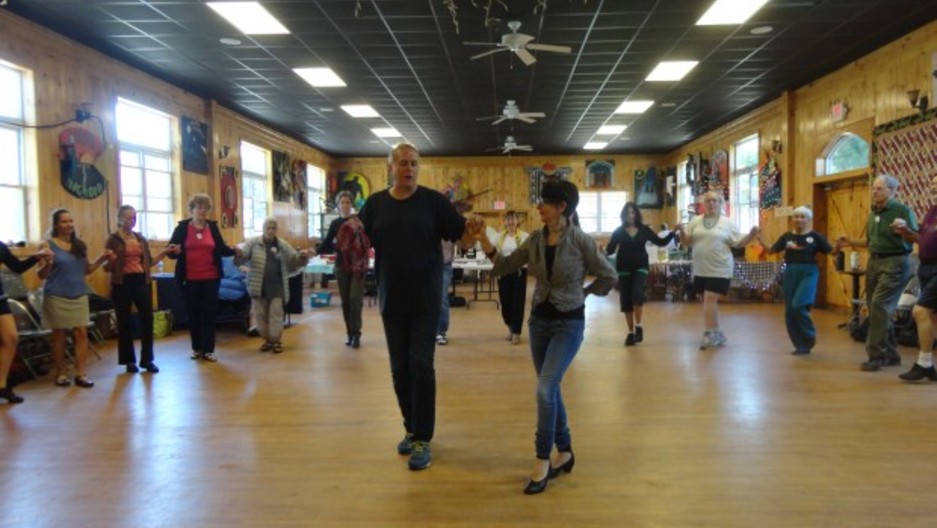 Share
Teenagers to seniors, hand-in-hand, form a circle and dance to the music of a live brass band. As they move, the dance hall vibrates. Welcome to the Balkan dance and music camp. It's 10 p.m., and the party is just starting. The camp, in upstate New York, started 30 years ago by an ethnomusicologist Mark Levy. His wife, Carol Silverman, is teaching Romani singing this year. "His vision was to have a place where people, Americans, could learn about Balkan music, dance, culture," she says of the camp. As the band winds down, people make their way to the kafana, a café. It's open all night, with Balkan food and drink, like plum brandy. Alan Zemel is working the grill, making cevapcici. "They are a mixture of pork, beef and lamb with all sorts of spicing," says Zemel. "It's the national fruit of Serbia." Zemel's been a Balkan camp regular from the start. What brings him back? The Balkan oasis that's created at camp, and seeing people like Dan Mullen. "We have this village that we create," says Mullen "And we just keep coming back to it over and over. It's the best part of our whole lives." Mullen's a fishmonger from Pennsylvania with Irish heritage. But he's a Balkan dance aficionado. "I love the Greek, I love the Serbian, I love the Croatian, I love the Turkish," he says. "It's the movement. It's the thrill of being with other people, doing the same thing." Campers spend a week sampling more than 40 folk music and dance classes from countries like Greece, Romania, Bulgaria, Macedonia and Serbia. Ljubomir Zivkov teaches a popular singing class on Serbian love tunes. Zivkov lives in Belgrade, Serbia's capital. In the camp's early days, teachers from the Balkans were rare. But when Communism fell, some emigrated–and some come just to teach classes. Zivkov says he enjoys sharing his knowledge with Americans. He says everyone here is extremely friendly, they have a great appreciation of the Balkans, and they are eager to learn instruments like the tapan, a Balkan drum that gives off a rich bass sound. Stacey Sternberg says it's almost impossible not to move when you listen to it. "The beats are so strong, and then they have all these funky melodies and interesting meters. It's really cool. I really like it," she says. Sternberg has come to camp with her parents since she was two years old. She's now in youth band here, plays the violin, and teaches younger kids. These melodies also attract newcomers, like Michelle Weller, who was born in Greece. She was nervous about being new here. But with circle dancing, she says, it's easy to feel part of the community. "You're just all doing something together," she says. "Even if it's your first time, you can learn it the first time and become a part of this smiling group of people enjoying themselves." And when the week is done, the campers wrap things up in true Balkan style: a lamb roast and a party goes into the wee hours of the morning.