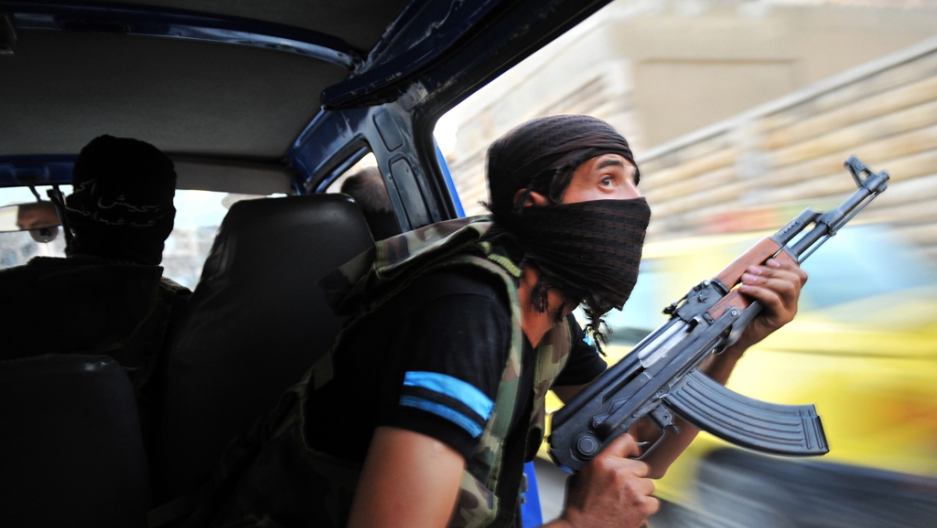 Syrian rebels hunt for snipers after attacking the municipality building in the city center of Selehattin, near Aleppo, on July 23, 2012, during fights between rebels and Syrian troops. Syrian rebels "liberated" several districts of the northern city of Aleppo on Monday, a Free Syrian Army spokesman in the country's commercial hub said.
Credit: BULENT KILIC
Share

A team of United Nations arms experts arrived Sunday in Damascus ready to begin their long-awaited investigation into the alleged use of chemical weapons in Syria's increasingly brutal civil war.

The 20-member team, led by Swedish scientist Ake Sellstrom, will over an unspecified period of time look for evidence of chemical arms use at three locations.

Inspectors will only attempt to determine if chemical weapons were used, not whether the regime of President Bashar al-Assad or the various factions of the rebel opposition used them.

However, for months during negotiations, while the team of inspectors waited on standby, the Syrian government attempted to limit the scope of the probe, which they succeeded in doing.

Inspectors will visit Khan al-Assal and two more unspecified sites, though there are areas near Damascus that some say should also be investigated. UN Mideast envoy Robert Serry has said there are 13 reports of alleged chemical weapons use in Syria.

On June 13 the United States announced it had a "broad range" of conclusive evidence, including "physiological samples" of sarin gas that proved Assad's government had used chemical weapons on a small scale.

Russia, Assad's stalwart ally and weapons supplier, claimed in July to have evidence that showed rebels had used chemical weapons near Aleppo in March.

Syria, along with Angola, Egypt, North Korea and South Sudan, has not signed the 1997 convention banning chemical weapons. Some western nations believe the Syrian government has stockpiles of nerve agents, such as mustard gas, sarin and VX gas.