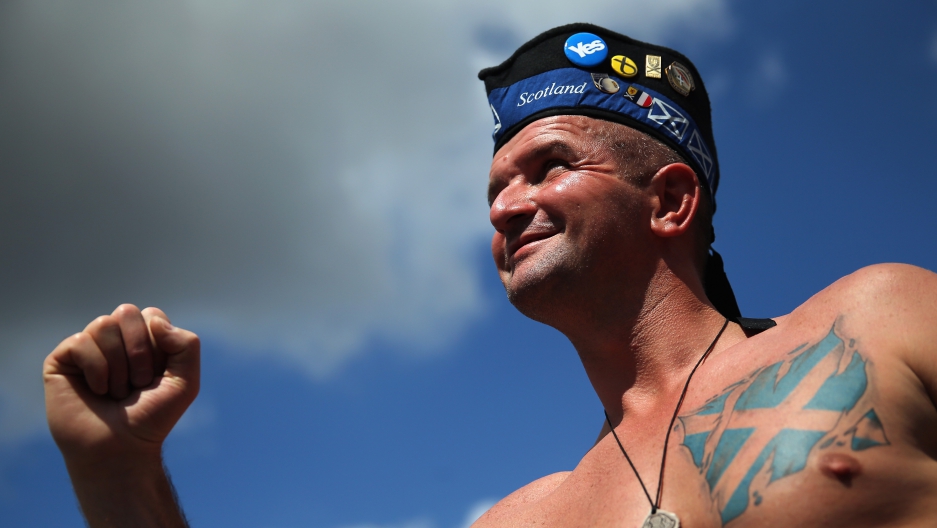 Scotland fans gather in Trafalgar Square ahead of their friendly match against England on August 14, 2013 in London, England.
Credit: Dan Kitwood
Share

Twenty-five thousand Scots descended on London this week to support their national soccer team in the first match between Scotland and England in fourteen years. It may be the last time the two nations meet as part of the same country.

Or not — a referendum a year from now will decide whether Scotland decides to breaks its 300 year-old union with England and leave the United Kingdom.

It’s unclear how much that mattered to the fans, many of whom appeared heavily inebriated.

The “Tartan army” — the loyal supporters of Scotland’s national squad — gathered in Trafalgar Square before the game. They draped the two Scottish flags — the yellow and red Lion Rampant and white on blue Saltire — around Nelson’s column, that iconic symbol of London, and poured detergent into its fountains, which spewed foamy water on the revelers.

But if Londoners found the invasion of one of their city’s main squares off-putting, they would have done well to remember the display was relatively tame. Annual British Home Championship matches between England and Scotland were canceled in the late 1980s due violence incited by zealous Scotland fans.

“The behavior of fans has improved enormously,” England coach Roy Hodgson told the Associated Press. “An awful lot has been done and fans are more responsible.”

Facing the “Auld Enemy,” as Scots call the English, at Wembley Stadium was good symbolic timing for the leading Scottish National Party (SNP), which has spearheaded the push for independence.

Scotland defeated a World Cup-winning English side at Wembley in 1967 to become the self-proclaimed “champions of the world” the same year the SNP broke into the political mainstream by sending its second elected member to the British parliament.

Independence supporters believe they have the wind at their back.

"More and more people are moving toward a yes vote as they become more informed about the choice Scotland faces and the historic opportunity offered by next year's referendum,” said Stuart Nicolson, spokesman for Scotland’s leader and SNP chief Alex Salmond. “Which is why we’re confident of securing a successful result."

Independence may not be as perilous as it may seem. Politically, Scotland could exist as a small, independent state inside the European Union.

Energy could help sustain its economy: Scotland is a leader in offshore wind production, and the SNP believes that revenue from North Sea oil reserves would provide enough to establish a sovereign wealth fund such as Norway’s.

Scottish culture is another global commodity. People around the world recognize kilts, Scotch and golf as Scottish, and traditional Scottish designs are currently in vogue.

Nicolson presents the choice for independence as a vote for democracy. "We believe it’s fundamentally better that decisions affecting Scotland are taken by the people who live and work in Scotland."

Independence opponents are no less optimistic, however, especially since the champion statistician Nate Silver earlier this week predicted that the referendum has “virtually no chance” of success.

Among the critics, British Prime Minister David Cameron has pledged to fight independence "head, heart, body and soul." Speaking at a conference of his Conservative Party earlier this year, he said the argument for maintaining the UK in its current form is "unquestionable".

Unionists argue that most of Scotland’s renewable energy resources can’t be viably exploited without subsidies from London.

How Scotland would join the European Union presents another sticking point. European Commission President Jose Manuel Barroso has said an independent Scotland would have to apply to become a new member.

Salmond proposes keeping the queen as head of state and allowing the UK to oversee foreign affairs and fiscal policy. But he says he’d send the British nuclear submarine fleet packing, which would jeopardize not only Scotland’s possible membership in NATO, but also Britain’s.

More from GlobalPost: Down and out in Tottenham

One recent Scottish poll found 44 percent of Scots remain undecided about the referendum.

Whatever the outcome next year, the looming referendum has prompted important debate about how much independence Scotland really needs, amid growing support for the argument that Scotland should be granted more powers — such as giving parliament more authority to raise revenue — on top of the broad autonomy the region already enjoys.

Back in Trafalgar Square, there were plenty of signs of the separatist campaign, including pro-independence “Yes” stickers plastered on the bronze lion statues.

If the soccer was an omen for the campaign’s chances, however, it wasn’t good: England won 3-2.