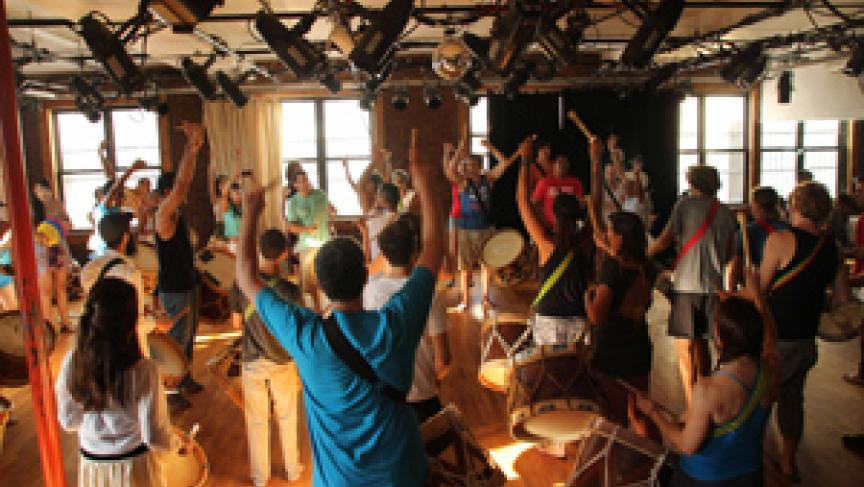 A collaboration between a group from Brazil and a drummer from Brooklyn is part of a rebirth of music with roots in Afro-Brazilian slave culture.

Maracatu is a musical and performance style that comes from the northeastern part of Brazil. Its rhythms come from Africa, and its pageantry has origins in an elaborate crowning ceremony performed by slaves back in colonial times.

The music is experiencing a resurgence these days, thanks in part to a collaboration between the Brazilian group Estrela Brilhante and the Brooklyn-based band Nation Beat. The groups kicked off a US tour recently in New York City, and also held a series of workshops on the basics of the music.

Forty people with drums slung around their necks are packed into the third floor of the Gowanus Arts Building in an old industrial part of Brooklyn. One cluster is playing the shallow caixa snare drum, another group pounds on the deeper alfaia. One person counts triplets on the oversized congue cowbell.

Walter Ferreira de França strides through the middle, marking the beat with two drumsticks, playfully urging drummers on, and leaning in close to check their call-and-response singing.

During one break he gently suggests, in Portuguese and somewhat enigmatically, "A bull lying down is not a cow."

The group is a mix of musicians from Mestre Walter's group Estrela Brilhante, and people studying maracatu with Brooklyn-based percussionist Scott Kettner.

Kettner first heard about maracatu from a drum instructor in New York. He spent time in Brazil in the early 2000s studying with Estrela Brilhante, and he started noticing some familiar things in maracatu.

There were rhythmic similarities, and similarities in how the music was performed–the costumes, the pageantry. And the musical styles each have their roots in the culture of African slaves in the New World.

Kettner formed a group called Nation Beat to explore these connections. The connection was made explicit on an album that they and Estrela Brilhante recorded together in 2005. You can hear some of the collaboration here.

This partnership has grown–and maracatu is enjoying a resurgence in Brazil and elsewhere.

It nearly disappeared in the mid-60s. Brazil's economy was in decline and it was hard to maintain the sprawling groups–sometimes numbering over 100 members. Dona Marivalda Maria dos Santos, the Queen and President of Estrela Brilhante, says the music was also looked down on.

"Maracatu used to be thought of as black-people music, black-people dancing," she explains, speaking in Portuguese. "It was seen as negative thing, with drunk people falling in middle of street."

But maracatu groups are now proliferating in the northeastern state of Pernambuco. This rebirth was sparked in part by popular musicians incorporating maracatu into their work in the 1990s, including Chico Science and his mangue movement. Groups are now getting some state support, too. And, Dona Marivalda says, the music has transcended racial boundaries. She says the majority of her group is now white.

Estrela Brilhante kicked off a tour with Kettner's Nation Beat recently at Lincoln Center in New York City. It's their first US tour.

Walter Ferreira de França was psyched to see the crowd's enthusiastic response, and says he thought there was some of the feel of the big carnival parades his group marches in in their native Pernambuco.

This wasn't totally unexpected. A doll that used to accompany Estrela Brilhante in all their parades actually spent decades in the US. The doll, named Joventina, came here when the group went dormant for a while in the late 60s.

Walter thinks Joventina's decades in the US prepared the way for the group. As the courtly procession made its way on stage at Lincoln Center, Joventina was held high, protecting them still.