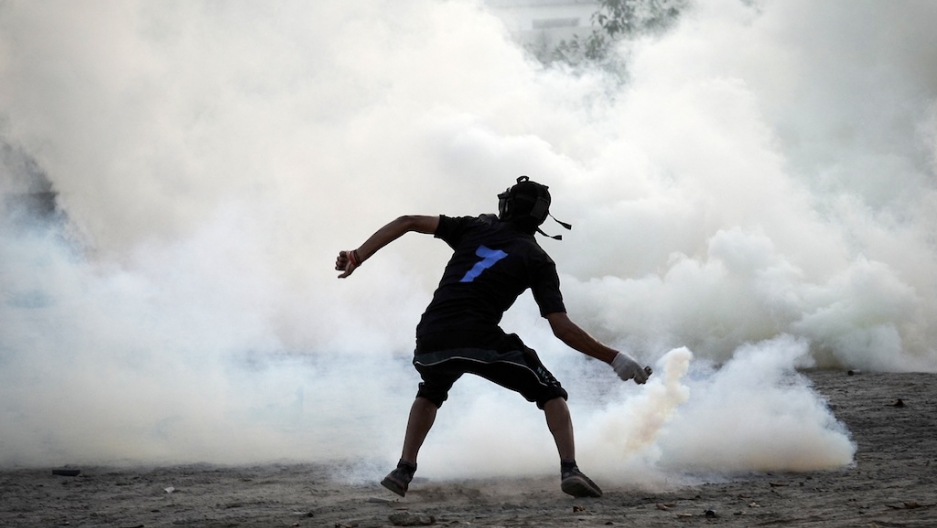 A Bahraini protestor throws back a tear gas canister fired by riot police during clashes following an anti-regime protest in the village of Abu Saiba, west of Manama, on August 15, 2013.
Credit: MOHAMMED AL-SHAIKH/AFP/Getty Images
Share

The Bahraini government is arresting journalists in an attempt to quell media coverage of increasing civil unrest in the nation, The Independent reported Tuesday.

Citizens of Bahrain have been taking to the streets in mass demonstrations against the government, demanding democratic rights and better treatment under the law — with a new push in recent weeks.

"The renewed drive to get protesters on the streets is being led by a group called 'Tamarod' or 'Rebellion,' named after the Egyptian movement that helped organize huge protests leading to the military ousting of democratically-elected President Mohamed Morsi last month," reported Voice of America on Thursday.

Paris-based Reporters without Borders said, “The authorities plan to impose a news blackout on the 14 August demonstration.” At least one foreign journalist has been denied access to Bahrain, and the organization added that the authorities “have no hesitation about arbitrarily arresting news providers and denying them access to lawyers.”

In addition to threatening journalists of all types of media, including photographers, print journalists and bloggers, the government also issued a vague warning to potential protestors.

“The government will forcefully confront suspect calls to violate law and order and those who stand behind them through decisive measures,” Sheikh Khalifa bin Salman Al Khalifa was quoted by the official Bahrain news agency as saying.

The mostly Shia population is ruled exclusively by the Sunni monarchy in the island kingdom, and tensions between the people and the government have remained high since the beginning of the Arab Spring.

Sectarian divides between Sunnis and Shiites in Islam further complicate an already delicate political and cultural landscape in the Middle East and other nations with substantial Muslim populations. GlobalPost has reported extensively on how this rift is currently transforming the geopolitics of the region and its relationship to US political decisions.

Allegations of torture and brutal crackdowns of protests have not impelled the US or the UK to condemn the Bahraini government as forcefully as they denounced similar human rights abuses in Syria and Libya.

A spokeswoman for the Bahraini embassy in London said: "The Government of the Kingdom of Bahrain has a zero tolerance policy for torture and takes any allegations in this regard very seriously. There are no journalists that are in detention for violating the press law in Bahrain."