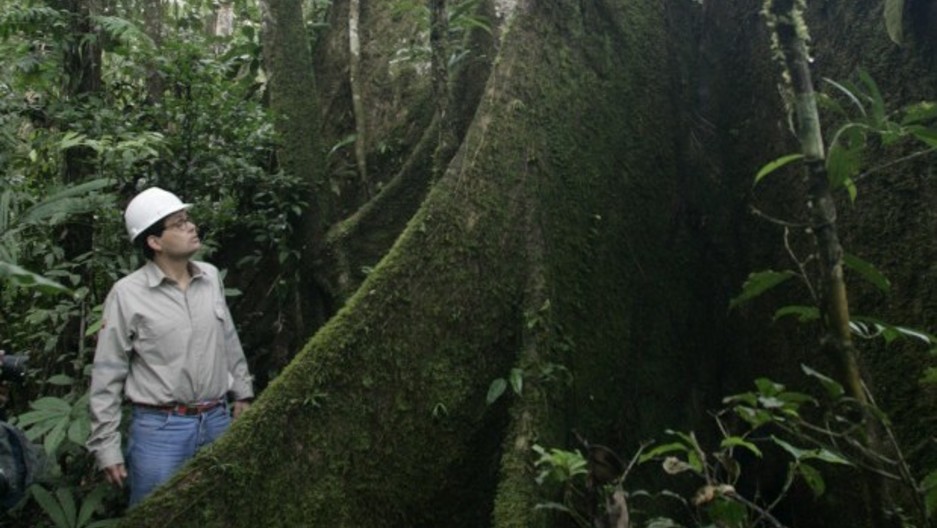 A petroleum engineer looks at a tree in Yasuni Park in this file photo taken May 15, 2007. Under pressure to preserve the environment while at the same time ease the poverty of his people, Ecuadorean President Rafael Correa has come up with an unusual solution. Correa wants wealthy nations to pay Ecuador $350 million a year in exchange for leaving an estimated 1 billion barrels of oil under the ground in the pristine Yasuni rainforest. Picture taken May 15, 2007. To match feature ECUADOR-OIL/CONSERVATION REUTERS/Guillermo Granja (ECUADOR) - RTR1S5N8

Three summers ago, in August of 2010, we reported on a groundbreaking new plan in Ecuador to protect a key part of the Amazon rainforest from oil drilling.

Well, there's news today on how that plan worked out. And unless you're in the oil business, it's not so good.

The plan was bold but essentially simple: pay us not to drill for oil.

As Ecuador's UN ambassador Francisco Carreon explained it at the time. He said the idea is that countries, enterprises, NGO's and people, citizens of the world, as we call them, can put their money in a trust fund to pay to protect part of Ecuador's Yasuni National Park.

Ecuador figured the oil beneath the tract of Amazon forest was worth about $7.5 billion, so it asked donors from around the world to pitch in half that amount to pay Ecuador not to pump it out.

The area is said to be one of the most biologically rich landscapes on the planet and is also home to several groups of indigenous people. Meanwhile, it were pumped out, the oil there would produce more than 400 million tons of greenhouse gas pollution.

So, supporters argued, the trust fund plan would help protect the land, the people and the climate.

"The idea is keep the oil underground," said former Quito mayor Roque Sevilla, who was appointed to sign up donors. "Receive the compensation by the developed world. Put all that money back in a trust fund. Invest the totality of that fund in environmental friendly energy systems, hydro, solar, wind."

But now, three years later, Ecuador has pulled the plug on the plan.

President Rafael Correa made the announcement in a speech that drew a loud crown of protesters outside the presidential palace.

The president said he made the decision "with deep sadness but also with absolute responsibility to our people and history."

He also said it one of the hardest decisions of his time in office.

At the time the plan was hailed by many as an innovative way to put an economic value on intact ecosystems and avoided pollution.

Others denounced it as akin to ecological blackmail.

The president said yesterday that Ecuador hadn't sought charity but instead was asking the world to take "co-responsibility in the face of climate change."

But global donors failed to step up. Actual contributions so far were just a tiny fraction of Ecuador's goal, and Correa said the country couldn't wait any longer to generate badly-needed income from the region.

All of which leaves a rhetorical question asked three years ago by Biologist Kelly Swing still hanging in the air:

"If we can't justify saving a place that has more species per square kilometer than any other place on the planet," Swing asked, "what are we going to decide to keep?"