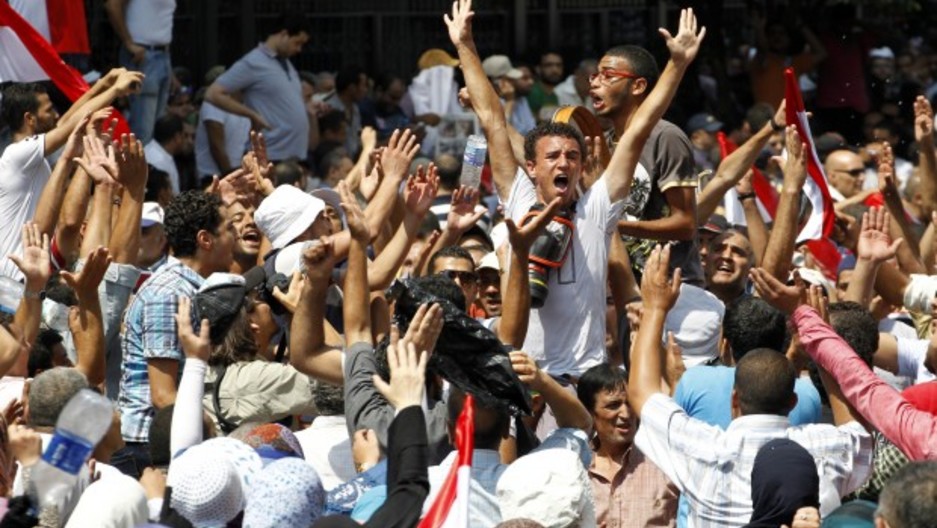 Supporters of deposed Egyptian President Mohamed Mursi shout slogans and wave Egyptian flags during a protest outside Al-Fath Mosque in Ramses Square, in Cairo August 16, 2013. Thousands of supporters of Mursi took to the streets on Friday, urging a "Day of Rage" to denounce this week's assault by security forces on Muslim Brotherhood protesters that killed hundreds. The army deployed dozens of armored vehicles on major roads in Cairo, and the Interior Ministry has said police will use live ammunition against anyone threatening state installations. REUTERS/Muhammad Hamed (EGYPT - Tags: POLITICS CIVIL UNREST) - RTX12NL5

Share
There is fresh violence in Egypt today. Several deaths have been reported as supporters of the Muslim Brotherhood and ousted President Mohammed Morsi took to the streets. Anchor Marco Werman speaks with Sara Aboubakr, political editor for the English-language newspaper Daily News in Egypt. Meanwhile, one reason the death toll has been so high in Egypt is that security forces were given a green light to use live ammunition to disperse crowds. Sid Heal has served in nearly every US law enforcement capacity–as well as advised foreign governments. And he's studied crowd dynamics and the evolution of mobs and riots. Heal says the Egyptian authorities have left the protestors few options.