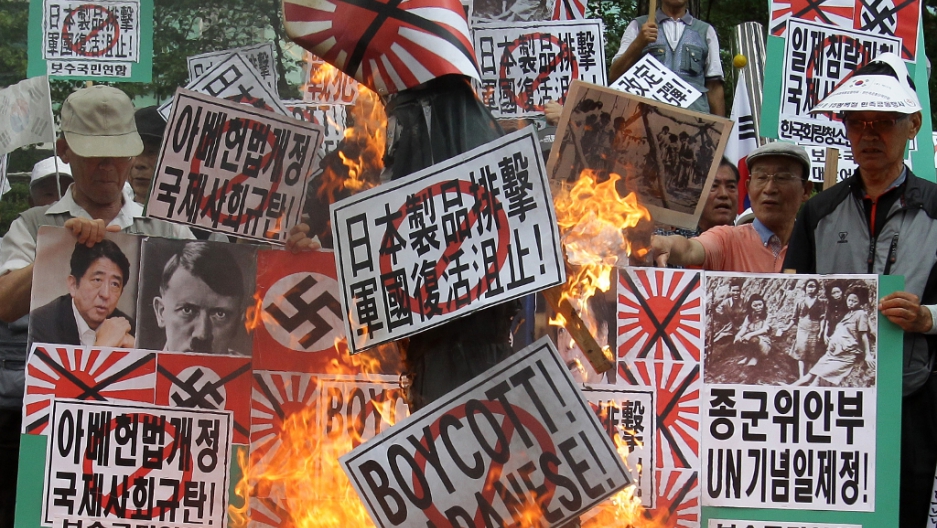 SEOUL, South Korea — As if tensions in Asia weren't bad enough, right wingers in Japan and South Korea are now trading insults over which country is worse.

But if there’s an upside, the ruckus has kindled discussion of the more dreadful offenses committed by the two countries in living memory — such as South Korea’s largely unrepented Vietnam War atrocities, which include a slew of civilian slaughters that dwarf America’s My Lai massacre.

The current mudslinging is rooted in historical resentment. From 1910 to 1945, Japan occupied the impoverished Korean peninsula. A ham-handed attempt at modernization led to brutal subjugation — including hard labor, forced sex and a ban on the use of the Korean language in schools.

As such, many are livid over unconfirmed reports this month that the Japanese government may soon condone the use of the wartime rising-sun flag — considered by Koreans to be an offensive World War II symbol, akin to Germany’s swastika. Koreans also resent the Japanese far right’s predilection for downplaying Tokyo’s history of atrocities against Koreans and other Asian nations.

Some online Korean commentators, frustrated with Tokyo, write that the US should not have halted its air campaign at the atomic bombings of Hiroshima and Nagasaki in 1945, which killed some 200,000 people (ironically, many of them Korean).

After years of bitter diplomacy, in the 1960s Japan paid millions of dollars in reparations to the Korean government and, in 1993, issued a formal apology to the 200,000 “comfort women” — mostly Korean, Chinese and Filipinas that its military forced into sexual slavery.

Now, far-right Japanese nationalists are trying to put the onus back on Seoul. They accuse the nation of hypocrisy, pointing to its unwillingness to apologize over its own brutal past.

In the 1960s and 1970s, South Korea dispatched 300,000 combat troops, the second largest foreign force, to the American effort in South Vietnam. Although international reporters tended to focus on US atrocities, among the Vietnamese, Korea’s soldiers earned a reputation as the war’s most ruthless.

Korean forces massacred inhabitants of several villages in the central highlands in the mid- to late 1960s, the height of foreign intervention. Under orders from commanders, the young conscripts followed a take-no-prisoners playbook. In one massacre, in Binh Tai, they warned all inhabitants to flee the hamlet, then set homes ablaze and opened fire indiscriminately on the residents who tried to escape, according to Korean veterans and Vietnamese survivors. In other instances, such as in Son Tinh and Tay Vinh, villagers were rounded up and executed.

Japanese nationalists also accuse troops of carrying out a systematic rape campaign that resembled Tokyo’s own history of sex slavery. (Historians agree that Korean troops fathered a large number of mixed Korean-Vietnamese children called Lai Dai Han. But it remains unclear the extent to which this was battlefield rape versus prostitution.)

The vicious tactics kept the troops safe from Communist insurgents, who, dressed like civilians, could launch sneak attacks and secretly influence entire villages. Tens to hundreds of villagers perished in each episode.

The scale of the violence was nowhere near that of Japan’s during World War II. Yet it was undeniably brutal, and some Korean civil society groups have called for greater recognition of these events.

Still, unlike Japan, the South Korean government has not formally recognized this chapter of its history as regrettable. “Such intentional, organized and systemized civilian massacres by the Korean army is impossible,” defense ministry spokesman Kwon Kihyeon told GlobalPost. “If such an incident did exist, it would have been exposed and made public a long time ago.”

“The [Republic of Korea] fought in Vietnam to stop the communization of a free South Vietnam. Since our army executed our mission under strict rules, there was no sexual exploitation of Vietnamese women,” he added.

Part of the problem, say experts, is that a dearth of historical documentation means Korean involvement tends to get scant recognition. American and Vietnamese researchers vigorously pursued revelations of the My Lai massacre and Washington’s misuse of toxic defoliants. But Korea was a dictatorship until the 1980s, and critical reporting was censored.

“Since nobody was covering the Koreans, and activists weren't interested in them either, the Koreans have no problem not acknowledging or recognizing what happened,” explained Don Kirk, a former Vietnam War correspondent who has authored multiple books on Vietnam and South Korea.

“A Korean who once served as a young officer in Vietnam, a lieutenant, once proudly told me that he had killed 300 people. He seemed to have maintained his own body count,” he said.

Today, Hanoi and Seoul are tethered economically, and neither government sees a point in digging up the shared war legacy. South Korea is Vietnam’s fourth largest investor and second largest bilateral aid donor. Vietnamese Prime Minister Nguyen Tan Dung wants to draw on the lessons of the South Korean chaebol, or conglomerates like Samsung and Hyundai, which drove Korea’s economic success story in the 1960s and 1970s.

Even outside of bureaucratic circles, the Vietnam War doesn’t seem to be a priority. In Seoul, it is difficult to find an academic or politician who is willing to comment on whether South Korea should recognize or apologize for the targeting of civilians.

One Korean university student, who asked to remain anonymous for fear of attracting the ire of nationalists, explains that the Vietnam War is a sideshow, an event that doesn’t factor into how her nation sees its current place in the world. “It comes down to racism,” she said, adding that some in Seoul see Vietnam as an inconsequential nation and not worth taking seriously.

Japan, on the other hand, “really gets under our skin,” she said. Decades of occupation and a fractious rivalry have left a trail of embitterment in South Korea, where exposing the crimes of a former aggressor is a matter of defending national integrity.