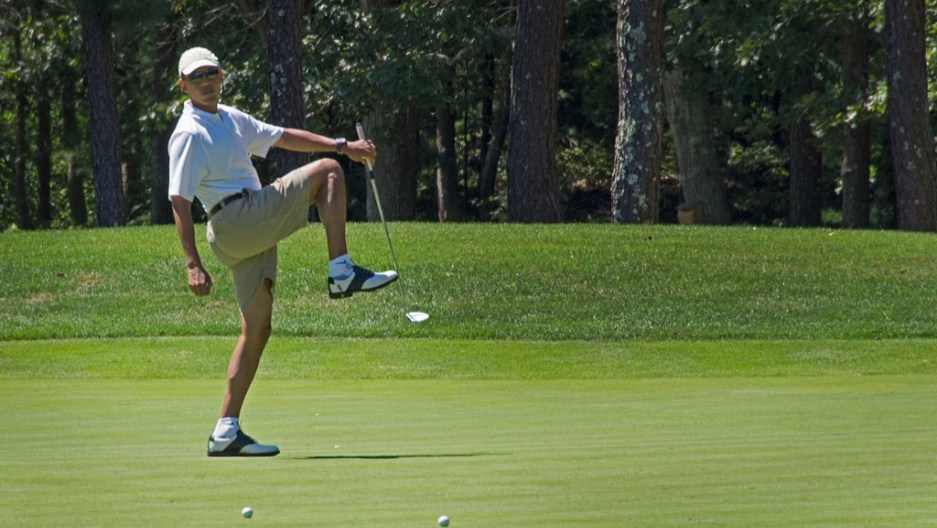 While the world watches, aghast, at the scenes of carnage unfolding in Egypt, many in the American heartland are equally appalled by Washington’s lack of an effective response to the tragedy.

It is, they say, part of a dangerous pattern of passivity in the face of crisis that has robbed the Obama administration of the moral high ground and made it less likely that any real action can or will be taken in other hot spots such as Syria.

The optics were dismal: scenes of open warfare on the streets of Cairo alternated with shots of President Barack Obama golfing on Martha’s Vineyard. His deputy press secretary earnestly assured reporters that “The United States strongly condemns the use of violence against protestors in Egypt.”

When the president did break off from his vacation to issue a response to the deaths of more than 600 people in clashes between the military and supporters of ousted Egyptian President Mohamed Morsi, it was a bit of an anti-climax.

“While we want to sustain our relationship with Egypt, our traditional cooperation cannot continue as usual when civilians are being killed in the streets and rights are being rolled back,” said the president. “As a result, this morning we notified the Egyptian government that we are canceling our biannual joint military exercise, which was scheduled for next month.”

This, according to Shadi Hamid, director of research at the Brookings Doha Center, was “a very weak response.”

“Canceling the Bright Star exercises is symbolic and little else,” he told NPR. “(I)t's also worth noting that Obama didn't even so much as mention the possibility of suspending military aid, and that's $1.3 billion a year.”

Military aid to Egypt is becoming more and more of a sore point across the political spectrum. Figures as diverse as Tea Party favorite Senator Rand Paul, a Republican from Kentucky, and Democratic Senator Patrick Leahy of Vermont have called for a suspension of aid.

“Our law is clear: U.S. aid is cut off when a democratically elected government is deposed by military coup or decree,” said Leahy in a statement.

Apparently not as clear as all that. John Kerry, speaking in Pakistan just two weeks ago, denied that a coup had taken place in Egypt, saying that the military was simply “restoring democracy” when it removed the elected president from power by force.

He almost immediately tried to walk back his statement, but the mixed messages have made the United States a punching bag for both sides in the Egyptian conflict.

Obama acknowledged this in his statement Thursday:

According to Reuters, the Egyptian government lost no time in jumping on Obama’s statement, saying that the president’s remarks were “not based on ‘facts’ and will strengthen and encourage violent groups.”

The Egyptian government’s pugnacious response suggests that it either does not fear losing its $1.3 billion military package or does not much care if it does.

This, say experts, is because the aid actually benefits the United States military industrial complex more than it does the Egyptian military.

“Every year, the U.S. Congress appropriates more than $1 billion in military aid to Egypt. But that money never gets to Egypt. It goes to the Federal Reserve Bank of New York, then to a trust fund at the Treasury and, finally, out to U.S. military contractors that make the tanks and fighter jets that ultimately get sent to Egypt,” begins an illuminating report aired on NPR last week.

Many of the M1A1 Abrams tanks that the United States sends to Egypt never make it out of the warehouse, insists Shana Marshall of the Institute of Middle East Studies at George Washington University.

“There’s no conceivable scenario in which they’d need all those tanks short of an alien invasion,” she told NPR.

The program that is causing so much heartburn in the corridors of power these days is little more than a major toys-for-boys program but, as former Republican congressman Jim Kolbe told NPR, "Big toys are things that generals and military people like to have around."

As Obama dithers, the region is spinning out of control. The civil war in Syria continues to exact an enormous cost in lives lost or disrupted, and economies shattered. More than 100,000 people have been killed, and another 1.6 million displaced, straining resources in neighboring countries like Jordan.

Michael Morrell, recently retired deputy director of the CIA, called Syria the number one threat to US national security in an interview with the Wall Street Journal.

But as Bloomberg’s Marc Champion points out, the president has failed to deal with it. While the administration, after a long period of indecision, did approve sending small-scale weapons to the rebels, the rebels themselves called the assistance “late and inadequate.”

“Obama's handling of the conflict in Syria will be seen as his largest foreign policy failure,” wrote Champion.

That’s a tall order, given some of the administration’s other shortcomings. From Libya to Yemen right up to Egypt, the president has consistently refused to take decisive action.

“(I)n foreign policy, Obama is a president of half-measures, of endless internal debates followed by split-the-difference presidential decisions that serve no one’s strategy,” writes Jackson Diehl, deputy editorial page editor of The Washington Post. “Instead of an intervention in Syria that might make a difference, token shipments of arms are being sent to the rebels; instead of a decisive break with Egypt’s out-of-control generals, a pointless exercise is called off.”

All of this has eroded much of the moral authority with which Obama began his first term, when he traveled to Cairo for his first major foreign policy speech, promising “a new beginning between the United States and Muslims around the world.”

But the new beginning has all too quickly become business as usual, say experts. In the process of trying to please everyone, the president has managed to do the exact opposite. In Egypt and across the region, US influence and prestige is at rock bottom.

Instead of fruitless attempts to keep lines of communication open, says Marc Lynch, director of George Washington University’s Institute for Middle East Studies, Obama has to take a firm stand.

“Cairo has made it very clear that it doesn't care what Washington thinks and the Gulf states will happily replace whatever cash stops flowing from U.S. coffers,” he wrote in Foreign Policy.

“The hard truth is that the United States has no real influence to lose right now anyway. … Taking a (much belated) stand is the only way for the United States to regain any credibility — with Cairo, with the region, and with its own tattered democratic rhetoric.”