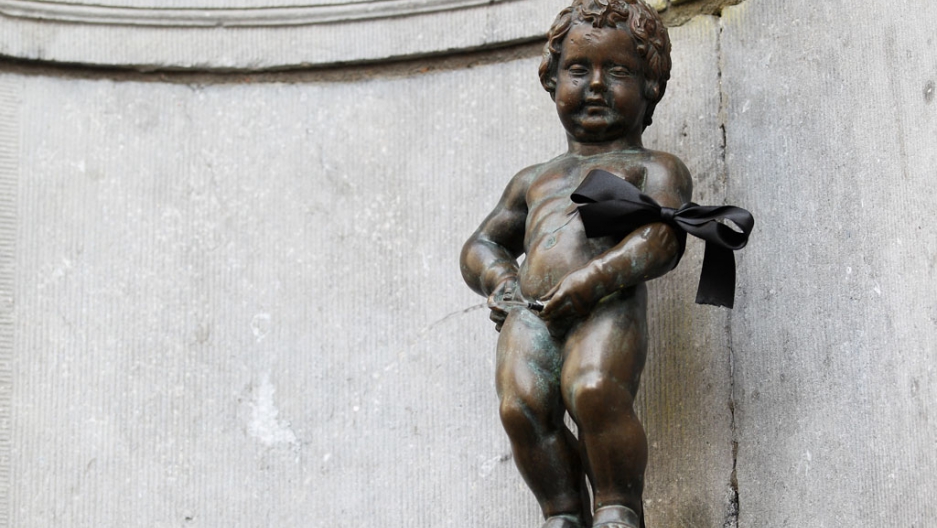 The Manneken Pis statue wears a black arm band in the city centre during a national day of mourning on March 16, 2012 in Heverlee, Belgium.
Credit: Dean Mouhtaropoulos
Share

If you've been to Brussels, chances are you've seen Manneken Pis, the bronze fountain statue of a little boy peeing into a basin. It's an icon in the Belgian capital and probably the most visited tourist attraction, along with Grand Place, the central square in Brussels.

But Manneken Pis is not alone. Not as many people know about the at least two other pee-pee themed statues in Brussels. Luckily, GlobalPost has its senior correspondent, Paul Ames, to do a full investigation.

"All of them are seen as representing the down to earth, irreverent and surreal spirit of the Bruxellois," Ames said.

Designed by Hiëronymus Duquesnoy the Elder, Manneken Pis has been happily peeing in Brussels for more than 400 years. His name translates to "Little Man Pee" in Marols, a Dutch dialect spoken in Brussles.

There are many legends as to how the fountain came to be and what it signifies, most of which involve a little boy peeing on something (opposing troops, a burning fuse) that then proceeds to save the entire city.

The little guy has been stolen so many times that in 1965, officials decided to swap out the original for a replica. The original is now kept at the Maison du Roi on the Grand Place.

The little girl below, "Jeanneke-Pis," is a more recent addition to the city, from the 1980s.

Local lore has it that a local restaurant owner was eager to establish equality between the sexes, and so set about creating a counterpart to Manneken Pis. Though, cynics suggest it was just a stunt to attract visitors to the restaurant.

Either way, the restaurant is no more and Jeanneke-Pis still squats. Her alley is now home to one of Brussels most popular bars, which claims to serve more than 2,000 beers from around the world.

The pissing dog statue, "Zinneke Pis," is static; it's not a fountain like the others. It was installed on the corner of one of the trendiest shopping streets downtown in 1998. Zinneke is Brussels dialect for a real local of the city, and also for a stray dog.