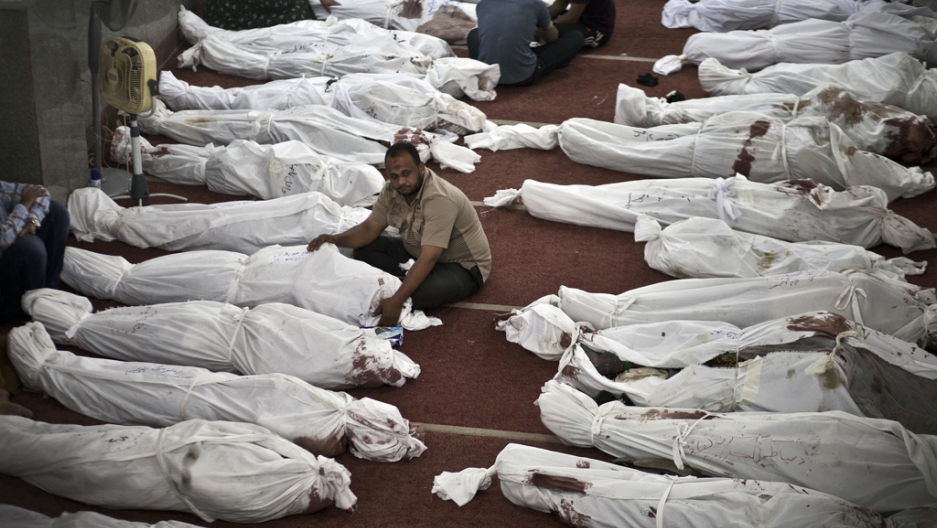 Egyptians mourn over bodies wrapped in shrouds at a mosque in Cairo on August 15, 2013, following a crackdown on the protest camps of supporters of ousted Islamist president Mohamed Morsi the previous day.
Credit: MAHMOUD KHALED
Share

CAIRO, Egypt — Egypt reeled Thursday from the shocking massacre of hundreds of Muslim Brotherhood supporters in the heart of the Egyptian capital the day before, grappling with widespread international condemnation and a mounting death toll.

At least 635 and possibly 700 people — the majority civilians — were killed Wednesday in a bloody crackdown by security forces on Islamist protesters, according to separate reports quoting the health ministry.

Rights activists monitoring the carnage, which marked the bloodiest day here in decades, said the figure is likely to rise. More than 200 corpses still held in al-Iman mosque near the Brotherhood protest site had yet to be counted for inclusion in the official toll, reports said.

Police later stormed the mosque where families of the slain had gathered, firing tear gas.

Egypt’s interior ministry announced Thursday that the military-backed government had granted its forces the right to use live ammunition to protect state institutions after Brotherhood demonstrators stormed the provincial headquarters in Giza, a suburb of Cairo, and setting it alight earlier Thursday.

The Brotherhood called for mass marches in Cairo Friday.

President Barack Obama announced from his vacation home on Martha’s Vineyard that he was ordering the cancellation of a biennial joint military exercise with Egypt’s armed forces, slated to take place next month, saying: “our traditional cooperation cannot continue as usual when civilians are being killed in the streets.”

The United Nations Security Council met late Thursday in New York in an emergency meeting on Egypt, while British, European and other diplomats condemned the bloodshed. Denmark announced it was cutting off all aid funneled through Egypt’s government.
The US stopped short of suspending its $1.3 billion in annual military aid to Egypt.

The violence started Wednesday morning when police and army troops moved-in on two encampments holding thousands of supporters of Brotherhood leader and former president Mohamed Morsi, whom the military ousted in July.

They had been camping there for six weeks to demand Morsi be reinstated. At 7am, security forces surrounded the largest camp at Rabaa al-Adaweya square, trapping demonstrators inside. They used armed bulldozers, tear gas, birdshot and live ammunition to rout the protesters from the area.

But eyewitnesses and reporters say troops were firing indiscriminately at the crowd, including with snipers who picked-off unarmed civilians at an alarming rate.

Police forces eventually evacuated the protest, and when demonstrators and medics later returned, fires had gutted the Rabaa mosque and field hospital. Dozens of bodies were charred beyond recognition. Some of them burnt when protest tents were set ablaze in the chaos.

By midday, Thursday, more than 230 bodies were laid out on the floor of the nearby al-Iman mosque for identification.

Shrouded in white shawls and bed sheets, the corpses bore gunshot wounds to the head, neck or chest.

Human rights researchers from Amnesty International and Human Rights Watch tweeted updates of chaos at morgues and hospitals where workers were overwhelmed by the number of bodies and autopsies, and families struggled to identify loved ones.

“He called me at 5am to tell me he’d seen a strange deployment by the army,” Ahmed Saleh said of his dead friend, whose body was next to him. “When I tried to contact him again, the lines were cut. We later found him with a bullet in his head.”

The atmosphere in the prayer hall veered between shock and rage at the slaughter of the previous day.

“I am so sad for my brother, I can’t believe that he’s gone" Mohamed Eid said as he attempted to preserve the shrouded corpse with nuggets of ice. “But I am happy that he became a martyr. We want revenge. We must try the killers responsible for this massacre.”

As heavily armed police and army troops advanced through the clearance operation, Egypt’s state-owned television channels aired stories of a brave battle to rid the area of terrorists. The interior ministry said 43 of its police officers were killed, funerals for four of them were held in the capital Thursday.

But inside al-Iman mosque, an engineer who had watched the rolling state media coverage throughout the clashes, was incredulous.

“Until today, I was not with the army and I was not with Morsi. My television told me that this was a mission to fight terrorists," he said. The man did not give his name, but said he wandered into the mosque out of curiousity on his way to work.

"But now I have seen this crime with my own eyes," he said. "And suddenly it is not difficult to choose a side."

But in a sign of how deeply divided Egypt has grown in the short time since Morsi was deposed, many local residents were unmoved by the violence.

They argued protesters invited the crackdown upon themselves. While some protesters were armed, the majority was not and the mass stockpiles of weapons Egyptian media declared were at the protests failed to materialize.

Many Morsi loyalists believe that Egypt’s minority Christian population is partly responsible for the military takeover and subsequent violence.

On Thursday night, Cairo and at least ten other provinces remain under an hours-long curfew.