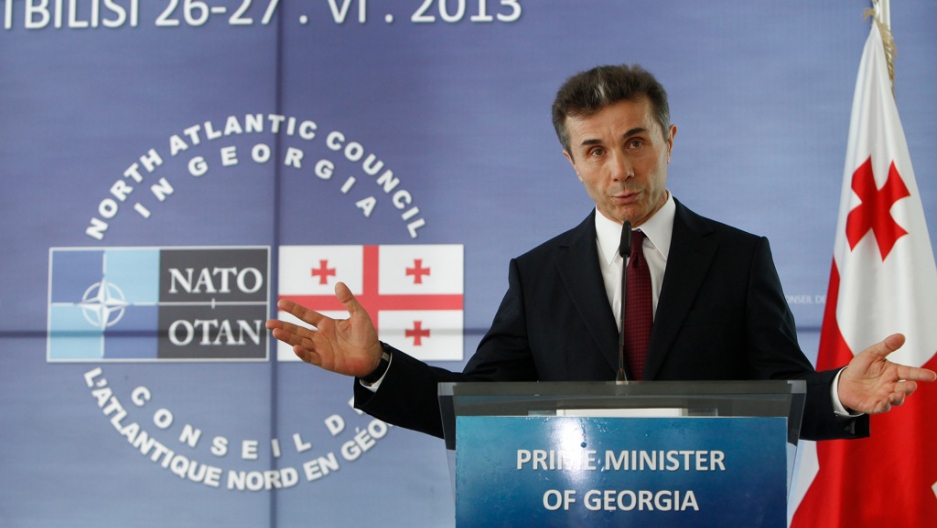 The conflict arose mostly from the political constellation that has existed in Georgia since the parliamentary elections in October. On the one side is the president, Saakashvili, whose term runs until the fall. For the past nine years, his National Movement party (UNM) ran the government and controlled the parliament.

On the other side is the prime minister, Ivanishvili, a fledgling politician and billionaire whose “Georgian Dream” coalition won the majority of seats in the parliament last October. His people now run the government.

The formal transfer of governmental power took place smoothly. But soon thereafter both sides fell back into campaign mode. They outdid one another in denying the other’s democratic credentials.

The fact that Ivanishvili earned his fortune in Russia leads repeatedly to criticism of his being a Kremlin lackey. Relations between Russian President Vladimir Putin and the Western-oriented Saakashvili have for years been toxic.

Conservative deputies from the European Peoples’ Party (EPP) of the European Parliament have also played an active role in the power struggle.

Christian Democratic Party politician Elmar Brok charges Ivanishvili with having engineered “a total seizure of power.” Mayors from the Saakashvili era were pushed from office, as were leading officials of the state-run radio. Christian Democratic deputy Joachim Zeller charges that Ivanishvili’s government has abandoned the search for a democratic consensus.

In a joint letter signed by 21 EPP deputies, the prime minister was charged with closing Georgia’s doors to Europe.

Saakashvili’s UNM is a member of the EPP. He regularly takes part in EPP gatherings at the highest level. At a recent meeting, EPP deputies approved a resolution threatening to withhold its approval of an EU Association Agreement with Georgia, a treaty creating a framework for cooperation that would offer important benefits to its struggling economy.

EPP politicians, unsurprisingly, refrain from criticizing Saakashvili. But Swiss Ambassador Günther Bächler has called the remarks by EPP deputies “Soviet style propaganda.” In a highly unusual letter to Ivanishvili, the diplomat spoke of biased remarks by the deputies that did not reflect realities in Georgia. He then praised Ivanishvili and his government for their efforts at reform and their readiness to listen to advice from non-governmental organizations and international institutions.

While modernizing much of the government administration during his presidency, Saakashvili also concentrated power in his own hands, facilitated elite corruption, conducted surveillance of government critics and initiated tax investigations against businesses that did not support his policies.

Legitimate questions can also be asked about the new government. In particular, a series of confusing statements by the new prime minister — who still needs to learn that everything he says and does will be judged by public opinion — has sown some doubt.

Public pressure is demanding retribution for suffering, real or imagined, from illegal activities by the Saakashvili government. Thousands of claims have been filed with the general prosecutor. Ex-PM and former interior minister Vano Merabishvili, who is now UNM's secretary general, and more then 20 former ministerial officials are awaiting trials for malfeasance.

Many Georgians wonder why, despite these facts, Ivanishvili is still so much the focus of criticism.

EU circles in Brussels are also unhappy with the comments by EPP deputies. Expansion Commissioner Stefan Füle says he is satisfied with the new government. Negotiations with the EU are progressing steadily, and “with some subjects we are doing better than under the old government,” Füle said in an interview.

Above all, the EU is interested in demonstrating a success for its Eastern Neighborhood Policy at the summit in Vilnius in November. The five other nations of the Eastern Partnership — Armenia, Azerbaijan, Ukraine, Moldavia and Belarus — have little or no progress to report.

Even so, Saakashvili and his supporters never tire of painting a threatening picture abroad of the situation in Georgia. Saakashvili and other leaders of the 2003 “Rose Revolution” succeeded in recent years finding supporters in the EU and in Washington, primarily among conservative politicians. Many leaders were so impressed by Georgia’s goal to join NATO, they were willing to overlook the lack of progress towards democracy.

Sympathetic statements by foreign politicians helped Saakashvili legitimize his policies with his own population. Lacking viable political institutions at home, his political opponents sought to attract foreign ambassadors as referees — the reason why comments by Swiss Ambassador Bächler are important. American Ambassador Richard Norland has also become an unofficial mediator between the political camps and appears to be an advisor to Ivanishvili, with whom he speaks often.

To the extent that the Saakashvili and Ivanishvili camps carry out their conflict on the international stage, they are also damaging both the image and the future of Georgia. And when European parliamentarians heat up the debate by presenting a one-sided, negative picture of the situation in Georgia, they are also limiting their own maneuvering room.

During an interview, CDU politician Brok seemed ready to compromise, saying: “We are trying to build bridges and to help moderate the situation in Georgia. I have invited Prime Minister Ivanishvili to a meeting of the Foreign Affairs Committee of the European Parliament. There is still time to talk and to put things in order.”

Silvia Stoeber is a freelance journalist from Germany who has specialized on South Caucasus topics for more then six years. She regularly works for several media in Germany, Switzerland and Georgia.