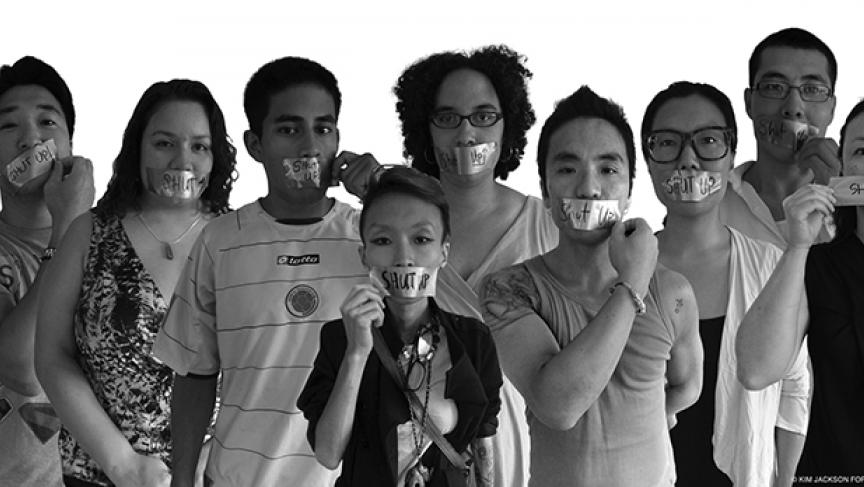 Gazillion Voices magazine hopes to help the adoptee community express their thoughts and perspectives on their own terms. (Photo: Kim Jackson)

Share
A new magazine aims to provide a voice for adult adoptees around the country. It's also no coincidence that many of the magazine's contributors are from Minnesota, a state with a rich history of international adoption. Minnesota Public Radio's Laura Yuen reports. Kevin Vollmers is evidence of Minnesota's connection with overseas adoptions. He often jokes that this so-called "Land of 10,000 Lakes" is also the land of a gazillion adoptees. Born in South Korea, Vollmers was adopted at age seven by a family in western Minnesota. He says when people think of adoption, they tend to focus on the adoptive parents and the baby they bring home. But there is less attention to what becomes of those kids. "That's one of the biggest things about adoption that people forget to think about," says Vollmers. "We actually grow up and make something of ourselves. We have kids, we have families, we have our own professional lives." So Vollmers has teamed up with other adult adoptees to launch an online magazine called Gazillion Voices. They want to help shape the conversation about adoption. I recently sat down in St. Paul with Vollmers and two of the magazine's contributors. They expect the publication to be controversial. All of them say the success stories of adoption must be balanced with the stories of loss. Blogger Laura Klunder, like Vollmers, was born in Korea and adopted by white parents. She says when she was growing up in Milwaukee's suburbs in the 80s, there was a storybook notion about international adoption. The narrative, Klunder says, goes like this. "We started when we fell out of the plane," she says. "We were destined for our adoptive families, and that we are just like you; we are exceptional. We're not like the other poor, undocumented communities that we were born from. And I had questions about that, even as a five-year-old, I was like, 'That's just really confusing, I need more information.'" Sitting next to Klunder is writer Shannon Gibney. She is half-black, half-white, and raised by white parents in Michigan. Even though she was born in the US, she relates to the struggles of international adoptees like Klunder. Gibney says Gazillion Voices aims to inject race into the conversation. "I have a great relationship with my parents. They were amazing parents, in a lot of ways. But the whole narrative of our family, and every family has a narrative, was that we don't see color, we're all equal, we're all the same," says Gibney. "But that didn't help me, especially when I hit puberty and started to notice people are treating me differently than they're treating you." Gibnely feels that there should have been more talk within her family about the fact that when she was adopted her family became interracial at that moment. Kevin Vollmers hopes that Gazillion Voices magazine will spark more frank talk like this. For years, he worked at an adoption agency and felt that some agencies weren't doing enough to prepare white families raising children from abroad or from minority groups in the US. "If you are going to be placing an African-American child in the middle of nowhere in northern Minnesota where they are going to be the 'diversity,' you'd best make sure there are resources available for those kids," he says. Adoption agencies agree that it's a fair criticism, but also add that they have adapted over time. In Minnesota, the state's Lutheran Social Service and Children's Home Society and Family Services provide 30 hours of training to adoptive families before a child's placement. Race is part of that training, along with trauma, grief and loss. As we chat about all of this, all three adoptees bristle at one question: Are they for or against adoption? "We get asked that question a lot," says Gibney. "And we kind of hate it, because it really puts us in this binary that erases a lot of these complexities. The reality is that we are here." "It is very complex, adoption is," says Vollmers. "To break it down to pro-adoption and anti-adoption, is in many respects a very disingenuous conversation to have. It doesn't allow for broader conversations. I personally have been labeled as anti-adoption, which is completely false. But that does not mean I can't look at, for example South Korea, where I'm from, and say there is a problem when single women who actually want to keep their kids cannot do that because of societal pressures and familial pressures." Bottom line, Vollmers says, is that he is pro-adoptee. And so is the Gazillion Voices publication. The inaugural issue features contributions from adoptees, but also from a birth parent and adoptive parents. Vollmers acknowledges a lot of adoptees think positively on their experiences, and says this magazine has a place for them, too.