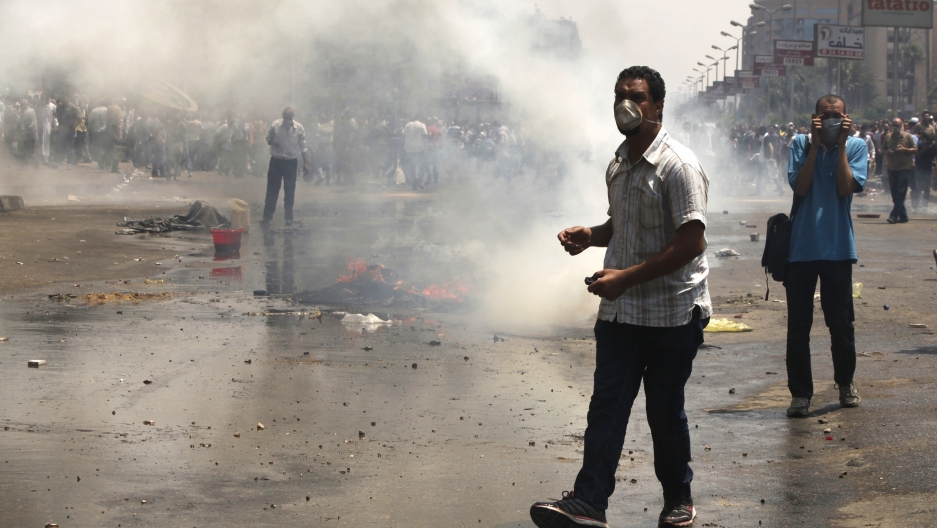 Members of the Muslim Brotherhood and supporters of ousted Egyptian President Mohammed Morsi are pictured during clashes with riot police and army personnel around the area of Rabaa Adawiya square, where the supporters are camping, in Cairo Aug. 14, 2013.

Egypt's upheaval since former President Mohammed Morsi was forced from office reached a fever pitch Wednesday as Egyptian security forces killed hundreds of Morsi supporters and wounded hundreds during a day-long assault on members of the Muslim Brotherhood.

Military forces cleared out two pro-Morsi camps in Cairo overnight using armored vehicles, bulldozers and tear gas against the supporters, according to reports. Muslim Brotherhood officials are calling the situation a "massacre."

"It's certainly the bloodiest day I've ever known in Egypt," said Louisa Loveluck, a freelance reporter in Cairo filing for the Global Post. "But the problem is the Muslim Brotherhood are so isolated that there is a very good chance that the military and police will not receive the sort of condemnation domestically that they should because there is a very strong belief here that the Muslim Brotherhood are terrorists; that they're all armed with weapons."

Egypt's interim government declared a month-long state of emergency, returning the military to the unchecked power it held prior to the democratic election of Morsi in 2011.

"They don't necessarily have public opinion on their side and that will certainly be very significant in the weeks that follow as we try to recover from this terrible, terrible day," Lovelock said.

Many of the supporters had been entrenched in Cairo for more than a month, or the entire time since Morsi was ousted and many people were expecting some kind of intervention by the new military-led government, Lovelock said.

"People have expected a move for a while now, but they keep hearing rumors that it was going to happen but it never quite materialized. Although people sort of were expecting worse, I'm not sure if they were expecting as bad as we've seen today," she said.

David Kirkpatrick, Cairo bureau chief for the New York Times, tweeted live from the scene all day describing the chaos.

In Egypt Rabaa sit in, Morsi supporters outside have no weapons but are attempting to make Molotov cocktails, break rocks... Futile

Blocks from Rabaa sit in in Cairo, soldiers are firing live ammunition at a lone young man throwing rocks from a roof

The violence has also spilled out of Cairo as Muslim Brotherhood groups were targeted throughout Egypt. Churches have reportedly been set on fire and, so far, pleas for calm are being ignored. Casualties from the assaults included all types of people including men, women, children and the elderly. Makeshift morgues housed the many casualities and temporary hospitals popped up to treat the wounded in playgrounds

"You've still got thousands of people in there determined to hold their ground," Loveluck said. "They are facing live ammunition from the police, there's tear gas hanging in the air, you can feel it, it stings your face…but people aren't leaving."

"The only sustainable path for either side is one toward a political solution," Kerry said. "I am still convinced that that path is in fact still open."

The big question for the U.S. is whether the $1.5 billion in aid to Egypt's military, allotted in the President Barack Obama's budget for the 2014 fiscal year, will be delivered. The government has not yet said whether that aid will continue to reach the Egyptian military.