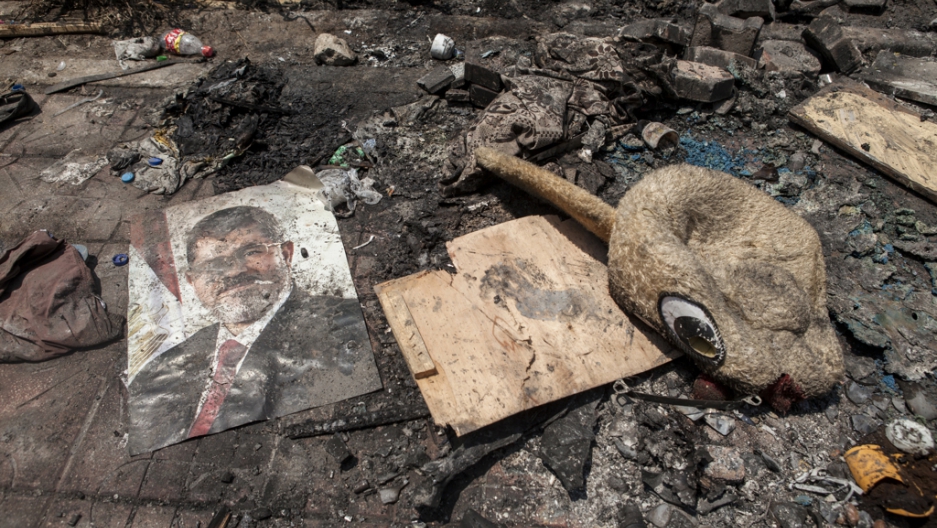 A poster of deposed Egyptian President Mohammed Morsi lies in the debris left outside the Rabaa al-Adaweya Mosque in Nasr City on August 15, 2013 in Cairo, Egypt. An unknown number of pro-Morsi protesters were killed in Egypt's capital on Wednesday as Egyptian security forces undertook a planned operation to clear Morsi supporters from two sit-in demonstrations in Cairo.
Credit: Ed Giles/Getty Images
Share

CAIRO, Egypt — As the Muslim Brotherhood sit-in outside Cairo’s Rabaa al-Adaweya mosque descended into chaos Wednesday — with police and army troops firing indiscriminately on thousands of protesters in broad daylight — Ragab Ahmed stood outside the building nearby where he works as a doorkeeper.

“I want to live in peace with them,” Ahmed said of the mostly Islamist demonstrators who had camped out for six weeks to protest the military ouster of former President Mohamed Morsi in July. “But the sit-in had to be dispersed.”

At least 700 people are dead and more than 3,700 injured after the violent dispersal of the pro-Morsi sit-ins by security forces unleashed a wave of violence across the country yesterday.

The majority of the dead in Cairo were demonstrators at the Rabaa sit-in, while the interior ministry said 43 policemen were killed. Islamist sympathizers attacked, burned or looted dozens of churches and Christian businesses. It was Egypt’s worst day of violence in recent memory.

May Afifi, employee at the Cairo Opera House: “For me, what happened yesterday was right. When this happened two years ago [to protesters], I thought it was wrong. But what happen against the Muslim Brotherhood last night, this was right. They are a terrorist organization and were using more arms and more arms.”

But while loved ones still sifted through the charred corpses laid out at a Rabaa-area mosque Thursday to identify their kin — after a fire gutted the demonstration’s makeshift morgue — many in Egypt, like Ragab Ahmed, applauded the army and police operation the morning after.

Even as world leaders condemn the army massacre in the capital, the move by the military-backed government has popular support at home.

“The Muslim Brotherhood is a gang that is controlling Egypt,” Amira Said Aghoul, a travel agent in downtown Cairo, said on Thursday. She says blames the Brotherhood, some of whom were armed at the demonstrations, for the violence.

“I thank God and Gen. Sisi for getting rid of them,” she said, referring to powerful Egyptian defense minister and coup leader Abdel Fattah al-Sisi.

The mainstream discourse in Egypt has in recent weeks taken a severe turn against the Islamists, after Morsi’s disastrous, yearlong presidency exacerbated political and economic tensions and law and order began to break down.

Mohamed Abdel Khadr, doorman: “General Abdel Fateh El-Sisi is just like Gamal Abdel Nasser,” Khadr said, referring to Egypt’s former president, a leader of the 1952 overthrow of the country’s monarchy. “He is strong and fair and from the people.”

“Morsi was not qualified enough to be president,” 65-year-old Nour al-Din Keshk, who said he voted for Morsi in 2012, said. “He brought the country down economically and politically, and we couldn’t go down with him.”

Both Egyptian officials and state-owned and private media, exploiting the mass discontent with Morsi and the Brotherhood following his ouster, turned to calling the movement and its allies “terrorists” who seek to destroy Egypt.

“The problem is there is no non-biased media coverage in Egypt,” says Ziad Akl, an analyst at Al Ahram Center for Political and Strategic Studies, a government-linked think-tank. “This helped in constructing this terrorist perception of the Brotherhood, but a part of it is Brotherhood’s own attitude.”

Millions of Egyptians turned out on the anniversary of his inauguration June 30 to call for his resignation. Sisi then moved swiftly to seize power, putting the Brotherhood on the defensive.

After that, both the Brotherhood’s blunders and their vilification left little in the way of compassion for the Islamists on the Cairo street, even after hundreds were killed.

“Yes, there are a lot of people dead. But who knows who killed them?” Mohammed Megahd, an accountant, said today. Some have suggested the protesters killed themselves — or each other — in order to blame the state.

Mohammed Megahd, accountant: “Yes there are a lot of people dead. But who knows who killed them? Now we have a good government. People that know how to do things. People that are capable. And they are firstly and lastly — Egyptians.”

A young man sitting on a main thoroughfare in downtown Cairo said the army and police showed Wednesday that “they are thugs.”

“I’m not with Morsi and I’m not with General Sisi. I’m an Egyptian,” the man said, though he would not give his name. “We are all Egyptian and we are all Muslims and we should stand together.”

But his sentiments seem harder and harder to come by as the death toll mounts, political reconciliation slips further away and diplomats are openly calling on Egypt to avert civil war.

“There is no willingness to understand [the Brotherhood’s] position,” Akl said.

Ahmed Rafat, a paramedic, said of the Islamists “that they deserve everything that comes to them.”

Ahmed Rafat, paramedic: “The Muslim Brotherhood started all of this violence. Their militants did. They started shooting at the police and they deserve everything that comes to them.”