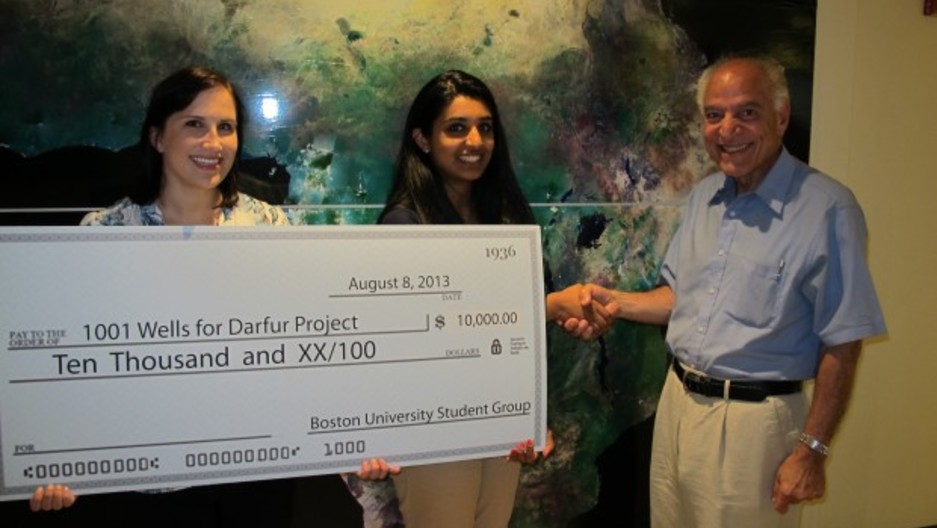 The Darfur region of western Sudan has been embroiled in conflict since 2003, with rebel groups fighting the Sudanese government forces and each other. Government-backed militia are also fighting among themselves over natural resources. All told, an estimated 200,000 to 400,000 people have been killed, and perhaps 2.7 million people have been displaced.

Darfur used to be front-page news, but as the conflict drags on, the conflict has largely fallen off the news radar. There are also far fewer calls to action, rallies, and conscious-raising events. But one group is still paying attention: college students at Boston University making efforts to improve life for people in Darfur.

Their story begins with geologist Farouk El-Baz, director of Boston University's Center for Remote Sensing, which he founded in 1986. From his office in Boston, El-Baz studies satellite imagery of the Earth, looking at rivers and streams, and cracks in rocks to see where rainfall travels. He's trying to discover where groundwater might be hiding.

Since founding his department, El-Baz' eyes in the sky have been trained on the deserts of the Middle East and North Africa. He's already found enough groundwater in his native Egypt to irrigate 200,000 acres of farmland for 200 years. More than 500 wells are now providing water for wheat, chickpeas, and peanut crops.

After his Egypt discovery, El-Baz turned his research south toward Darfur. Satellite images suggested that it used to be much wetter there.

"There was a vast lake in the northern part of North Darfur state. And that lake was as big as Lake Erie," said El-Baz.

That water seeped underground and is still there today. El-Baz presented his findings to Sudanese president Omar Al-Bashir and government officials, including the governor of North Darfur, six years ago. He also met with United Nations Secretary Ban Ki-Moon.

Currently, many people in Darfur, especially those in refugee camps, rely on hand-dug wells that are only two or three feet deep. El-Baz described his meeting with an older man in Darfur, when a child came by a well with a plastic jug.

"The kid could not reach over the side of the surface well, and the man walked in, into the water with his bare feet and filled the jug for the boy. I mean, the man was walking on the desert barefoot.

"And whatever his feet might have picked up is now part of the water. So, you can make a huge difference if you bring in water from the deep that is clean that has nothing to do with the animal's life and the things that are happening on the surface."

After presenting his findings at the UN, El-Baz came back to his day job, teaching undergrads at BU. He was lecturing about Darfur when some students approached him after class.

El-Baz said, "And they came and talked to me, and they said, 'Can we initiate drilling a well?' I said absolutely. So they said, OK, and they started this initiative, which is a wonderful thing, a bunch of students just thinking they could collect $10,000."

El-Baz laughed saying this, because he can't believe the students actually made it. It took five years, with some students graduating and others taking their places, but last week they gave him a check for $10,000.

"The idea was called a drop for Darfur. And it was basically, instead of making a typical ribbon, each ribbon was folded into a drop of water, and we sold them for $1. And so, we would stand in our student union and sell those. Or Dr. El-Baz would give lectures, and we'd sell them afterwards. We kind of just had them on us at all times."

Dilwali added with a chuckle, "It's a lot of manual labor."

Sure, it might've been easier to hit up wealthy alumni for some quick cash. But that wasn't the point, explained recent graduate Melinda Hudson, the outgoing president of the student group, 1,001 Wells for Darfur.

"When people say Darfur, people think, 'Oh, an area of conflict.' But they don't understand what it is our group is trying to tackle, the issues over the sedentary people and the nomads and the scarce water resources. They don't get the details of what we're trying to do. Our main objective is to raise awareness about our specific project."

Reaching the $10,000 goal was a bittersweet moment though. They have approval from the United Nations to dig the wells. There has also been a lot of money raised from other sources to construct them. But with a renewed surge in violence there, the wells are on hold. It's too dangerous to dig them now.

"I think there's definitely a sense of frustration," said Dilwali. "We have the funds accessible, and we know it will be done, it's just hard to have that money in your hand, and be like, OK, it's not going to be done right now."

But, she added, the last thing they want to do is put more lives at risk by rushing the project.

El-Baz has also helped raise a lot of money from wealthy donors in Gulf states, but he brims with extra pride reflecting on what his students accomplished.

"These people (the students) don't have that much money. I mean they are looking around for lunch money," said El-Baz. "Therefore, if they can put a dollar for a cause like this, this means they really understand it, and they really would like to do something for other human beings that they have not met and they do not know, which is a wonderful thing to do."

The Boston University student group is already focused on their next goal, raising $10,000 for a second well. They're also recruiting students at some nearby universities to create their own campus groups.