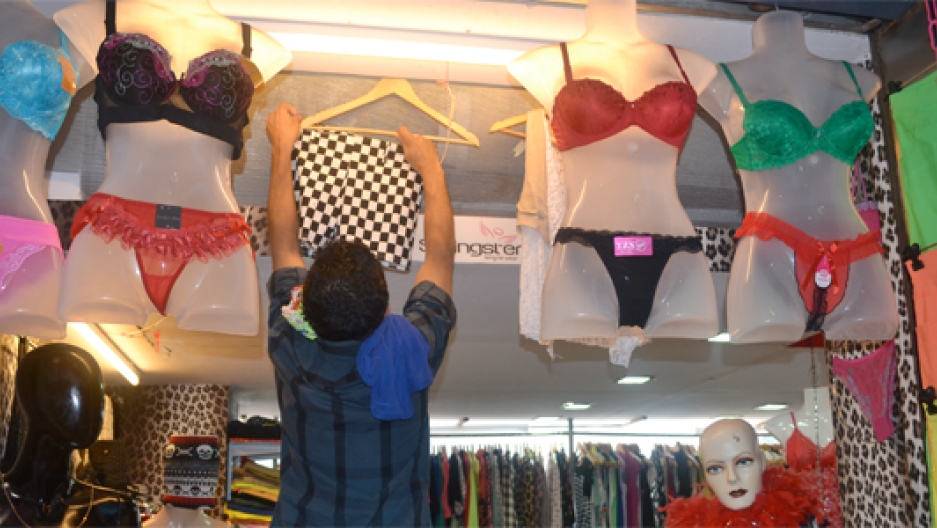 After months of gruesome news of rape in India, the world's largest democracy is still struggling to stop violence against women. Delhi passed stricter nationwide penalties for rape, and local governments are looking for their own ways to address the problem. Mumbai, India's financial capital, is taking it's own controversial step. The city plans to ban mannequins from displaying lingerie.

In Mumbai's trendy Bandra neighborhood shoppers from all over the city are drawn to its open-air markets. Everything is on sale here–clothing, purses, and shoes. And most of it is for women.

One shopper, Zara Sheik, quickly scans a table of bras and underwear. On the wall in front her, clear plastic torsos show off the selection of lingerie. They're not full mannequins, but the plastic forms have enough cleavage to make Mrs. Sheik uncomfortable.

So you don't like to see that up there? I ask.

What does it make you think?

"It feels very embarrassing. Even if my husband sees it I won't like it."

Surprisingly, the shop manager agrees with her. Zeeshon Menon says mannequins wearing underwear is a problem. When I ask him if they give him impure thoughts, he seems embarrassed.

Okay, a little context: Generally, women in India wear loose-fitting clothes that cover their arms and legs. Showing shoulders or wearing jeans is off-limits in many traditional homes. So in this context a mannequin in a bra can seem provocative.

At least that's how it seems to 39-year-old Ritu Tawde. She is a "corporator" for the city of Mumbai. It's kind of like being a city councilor. The now-infamous Delhi gang-rape that took the life of a 23-year-old student last year jolted Tawde into action.

"Rape cases in our country are increasing," says Tawde. "To stop this, somewhere someone has to make an effort."

Tawde blames some rape cases on mannequins exposing so much skin, albeit fake skin.

"Our Indian culture, one that has been around for many years, has not witnessed this kind of exposure," she says. "There are certain disturbed minds in our society, existing or potential criminals, who upon seeing a female mannequin wearing lingerie, will be provoked to commit a crime."

Tawde proposed a city ordinance banning stores from displaying mannequins wearing lingerie in their windows. The measure passed and just needs the approval of the city commissioner before it can take effect.

Many lingerie sellers are upset.

Tasneem Mansuri owns a new lingerie store inside a popular Mumbai mall. She says the law is something he's really pissed and mad about.

"Because a visual sells," she says.

Two mannequins dressed in thongs, garter belts and feather boas greet customers at the door to Mansuri's store. But the proposed ban has stopped her from displaying mannequins in the windows facing the street. She says mannequins are important for helping women visualize what they'll look like in lingerie.

"What's the harm of having a lingerie display? It's not vulgar at all. It's something that a woman needs to wear and does wear," she says.

Mansuri says scantily clad mannequins don't turn Indian men into rapists. And she worries that this ban means Mumbai isn't the cosmopolitan city she hoped it was when she opened her store.

Many media commentators have similar complaints. They're making fun of the ban and called it regressive. Forbes India Editor-In-Chief R. Jagganathan says the mannequin ban exposes a growing rift between the elite and everyone else.

"You have a very progressive element, which obviously finds this silly," says Jagganathan. "To ban mannequins because it will put thoughts in men's heads is silly. You have to change the way they think. You can't do it by removing a mannequin. That's an obvious thing to say."

However, Jagganathan says there's another side.

"This is a city that is accumulating people every year. We are nearly 18 million people in the city. And different people come from villages with different mindsets. There are places I think where boys and girls don't even talk to each other."

Jagganathan says the city found an easy, inanimate symbol to target–lingerie mannequins. But he says it requires deep societal change to root out misogyny and violence against women.

And that's hard to legislate.