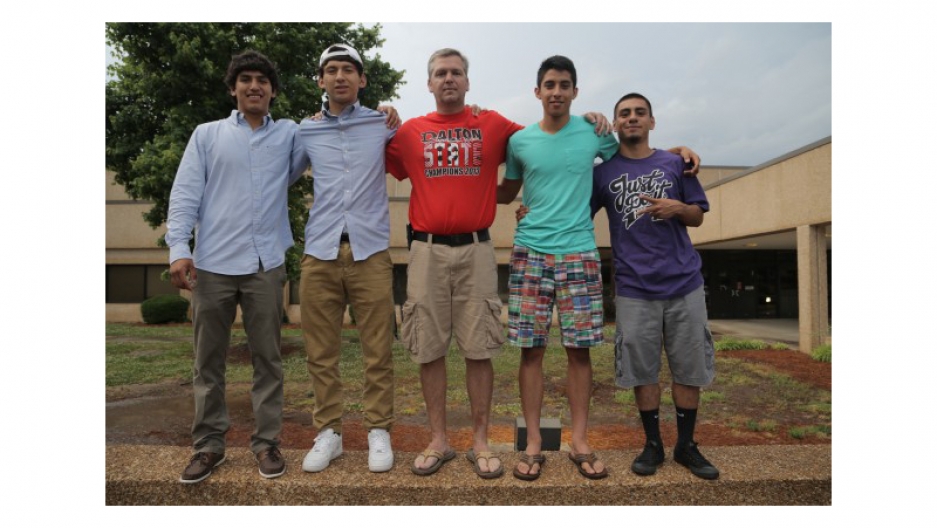 If you're near the small city of Dalton in Georgia's Appalachian foothills, you might here this on the radio: Spanish play-by-play of local high school sports.

Dalton High recently won the 4A state championship and got ranked America's number one spring soccer team. The team is entirely Latino, except for one player and the coach, Matt Cheaves.

And his Spanish is ... limited.

"I can say animal names really well because my last name is Cheaves," he said. "And in Spanish sometimes they say 'chivas' and so they call me 'goat,' but other than that I don't really say much in Spanish."

This year "the goat" didn't need to say much in any language to his team. They crushed the opposition. Cheaves recalls a game against an almost all-white team down near Atlanta.

"They were kind of in shock and awe. In about 15 minutes into the game they'd given up more goals in that game than they had all season," he said.

Cheaves says it felt strange to coach an all-Latino team when he started 19 years ago. Now, he doesn't even think about it.

"It's a great thing to see. I really love that about Dalton," he said.

But soccer isn't Dalton's traditional claim to fame. It's known more for something else: carpets. There are over 150 carpet mills in the area, and the workforce used to be mostly white.

The head of Dalton's Chamber of Commerce, Brian Anderson, says there is a strong Appalachian culture in Dalton that's very independent and very competitive. He says in the late 1970s, immigrants started coming to fill labor shortages in the carpet industry. Now, Dalton is 48 percent Latino. The rest of Georgia is just 9 percent.

While some parts of the state are resisting the changes brought by new immigrants, Anderson says, in Dalton, the two cultures have coexisted for over 30 years.

"If you asked the average nine or 10 people in the street what they think about it, they'd almost be surprised about the question. It's been so prevalent for a while, we just don't think about it," he said.

José Hajar says he feels integrated here. He came to Dalton from Mexico with his family more than 30 years ago.

But Hajar may want to carry some proof of citizenship if he travels to other places in Georgia or the south. Two years ago, Georgia joined a handful of other states, including Alabama, in passing so-called "show-me-your-papers" laws. It lets local police detain and jail people determined to be here illegally, a power usually reserved for federal officials.

The law has caused some unrest in Dalton, but not a mass exodus. The Latino roots here are too deep. You can see that at any of the city's growing number of recreational soccer fields.

The students from Dalton High's soccer team learned the sport on the recreation fields by playing with adults like Rafael Mendiola. He was on the school's first state championship team, back in 2003.

"They want to gain experience from us," said Mendiola. "They're like, 'Hey we want to play because we want to get experience.' So why not? We let them play."

Caleb Paniauga, on Dalton High's soccer team this year, is inspired to be around guys like Mendiola.

"It just feels good to play right there beside him. And (to know that) I won. It's a dream, an accomplishment," he said.

Next to Paniagua is his friend Eder Mora, also on Dalton High's soccer team. Like many of the young players here, his parents work in the carpet mills. But he says they want him to focus on bigger dreams — like college.

"It's not very easy. That's why they say to take education seriously, so I can be even better than they are and give my family a better atmosphere to live in," he said.

Soccer could lead to that education. Nearby, Dalton State College is awaiting approval to start a soccer program and offer scholarships.